Many of us are uncomfortable when we have to think about the intersection of religion and politics. Yet our politics are undoubtedly informed by our religion. None of us who believe that abortion, euthanasia, and gay “marriage” should not be legal can ignore the fact that most of our political opinions are shaped by what we believe about God, the purpose of life, and human nature. Yes, these truths can be defended from reason, but it is not the logicians but the Christians who actually hold the right premises and draw the correct inferences. Catholics, for example, hold that every human life to be sacred because each person is created in the image of God. What does mean when it comes to laws and policies? 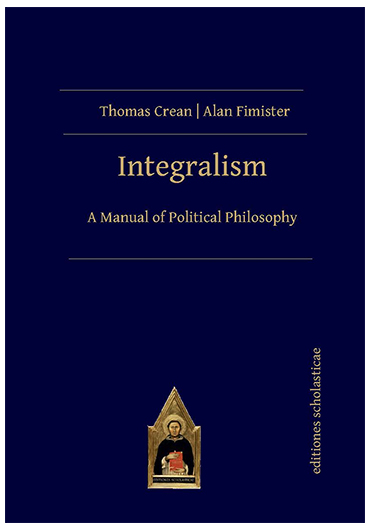 The time has come to ask ourselves how much our Faith should affect the political realm and how much room there will really be for the faithful in that realm a few years hence if we are too modest in our answers.

A new book, titled Integralism: A Manual of Political Philosophy, addresses this topic in a thorough and detailed manner, starting from the most basic foundations and assumptions. One of the co-authors, Fr. Thomas Crean O.P., is a friar of the English Province of the Order of Preachers and has published on apologetics, liturgy, and natural theology. The other, Dr. Alan Fimister, is Assistant Professor of Theology and Church History at St. John Vianney Theological Seminary in Denver. He has published on European political history and Thomistic political philosophy.

Crean and Fimister offer a manual of political philosophy and a comprehensive account of Integralism, that is, of the theory of Christendom. Their argument rests on one crucial premise:

Politics, like all moral philosophy, must be instructed by divine revelation. This is because, in contrast to speculative reason, the first principle in moral and practical philosophy is the final end: before deciding what to do, we must first know what to aim at.

Helpfully, especially for the reader who has not been exposed to political philosophy from this perspective, the authors begin from the most basic of concepts: society, the perfect society, the common good, the origin of authority, the family, and property. Understanding that the common good is higher than the private good is not easy when everything and nearly everyone around us screams out that the purpose of society is to help us to accumulate and enjoy private goods.

The chapter on the family should pique the interest of those of us who have taken it for granted that the individual is the basic unit of the society. The assumption of individualism in our political discourse has driven us toward policies that in the end have been contrary to the good of human society and of the person. Crean and Fimister argue that because of God’s institution of marriage, historically in the Garden of Eden and timelessly in virtue of nature itself, it is in that primordial relationship that the first society which strives for the common good is formed. The family is endowed with the power to form wider human society including the temporal polity: “The family and not the individual citizen is the basic unit of the temporal commonwealth, and hence it is fitting to vest certain office in families and not merely in individuals.”

The organization and government of multiple families creates the need for temporal authority, because once an individual becomes an adult, he needs an authority above himself for the proper functioning of society. The authors, in the chapters on authority, criticize liberalism, which has been the dominant ideology in the West since the French Revolution. Liberalism’s promotion of free will or free action as the highest aim of civil authority is not, they argue, compatible with reason or the Christian worldview. As a creature, man is necessarily created for an end (although he cannot that end without divine revelation) and his own actions cannot be his ultimate destination.

However, human beings are fallen and are prone to avarice, hubris, and greed. Because Our Lord knows the frailty of His creation, He has distinguished between the wielders of the spiritual and temporal powers. Thus the need to appoint two powers: one to guard that divine revelation and one to facilitate man’s attaining, by divine grace, a nature healed of its ills. Pope Gelasius I, the Old Testament, and the Gospel of St. John (where Our Lord asks St. Peter to put away his sword) are used as sources to explain the necessity for this separation.

The two chapters on the nature and function of authority attempt to refute one of the most common objections to Integralism, namely, that it proposes a Catholic theocracy. As someone who grew up with the specter of Sharia, this objection remains my biggest concern when discussing Catholic Integralism. Yet, at the same time, the failure of the liberal state and the Western descent into the madness of secularism make the arguments offered by Crean and Fimister compelling, even seductive. The most important of these is that “in any given society the spiritual power cannot annul the law that determines the manner in which temporal power is obtained, unless that law be perverse.” God gave families the power to decide the political order under which they wish to live and the spiritual power confers this order and its executors full legitimacy by ordering and directing it to its end.

One of the oft-heard objections to Integralism is that it exclusively promotes Catholic monarchy as opposed to other forms of polity. Crean and Fimister deny that Integralism demands or requires any particular form of government and, with ample references to St. Robert Bellarmine, St. Thomas, and several Church fathers and popes, lay out why a mixed polity with monarchic, aristocratic, and democratic elements would be the most stable and suitable method of governance. The American system, in this regard, would be an excellent example of mixed polity with the Presidency as its monarchic element, the Supreme Court as the aristocratic, and Congress as its democratic element.

The chapter on political economy offers a vision of a system that honors private property and the necessity of paying the worker a just wage, while allowing the temporal power to regulate private ownership for the common good, though without excessive or even partial use of taxation. Both Socialism, the ownership of the means of production by the temporal power, and crony Capitalism, a distortion of the market economy by usury, are unjust, though the authors content that Socialism lends itself to greater injustice.

Integralism provides an accessible and deeply sourced review of political philosophy and lay Catholic ecclesiology at a time when many Catholics have significant questions about the Church’s place and direction in public affairs. A serious and academic (yet eminently readable) book such as this, one hopes, will lead to other works that will explore further faith’s place in politics. For despite all the talk to the contrary, man cannot separate himself from his core beliefs while he engages in politics and economy.

Whether one is inclined to agree with Crean and Fimister or not, Integralism makes the case for Christendom with clarity, while providing the groundwork for an informed discussion that can be postponed no longer. As Alexis de Tocqueville stated in his classic work Democracy in America:

Men who live in Democratic times are, therefore, predisposed to slide away from all religious authority. But if they agree to such an authority, they insist at least that it is unique and of one character for their intelligence has a natural abhorrence of religious powers which do not emanate from the same centre and they find it almost as easy to imagine that there is no religion as several […] our descendants will tend increasingly to divide into only two parts, some leaving Christianity entirely and the others embracing the Church of Rome.