Last year at the Eastern Churches Seminar at Notre Dame College in Ohio, I gave a lecture entitled “If My Saints Are True, Are Yours False?” I looked at some of the complicated issues that arise between Catholic and Orthodox Christians when it comes to commemorating saints born from our divisions—for example, Josaphat Kuntsevych, canonized by Rome as a martyr and beloved among Ukrainian Catholics in particular but regarded by some Orthodox as a traitor for leading many Orthodox Christians into communion with Rome; or Alexis Toth, a sometime Greek Catholic priest canonized by the Orthodox Church of America after leaving Catholicism in a dispute over married priests. Can Catholics seek Toth’s intercession or must we condemn him as a “schismatic”? Are Orthodox justified in applying the same label to Kuntsevych? 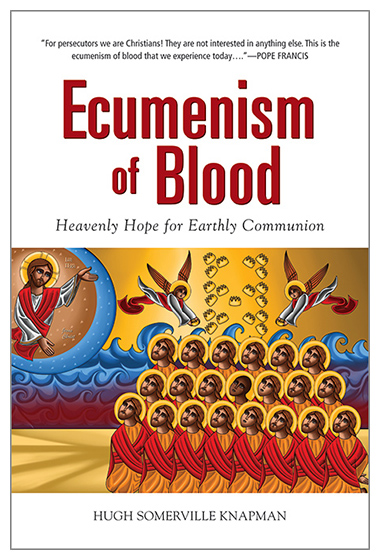 Other examples raising related questions include St. Augustine of Hippo, who sits very uneasily among the Orthodox, some of whom consider him a saint but others a quasi-heretic. Among some Roman Catholics until Vatican II, the hesychast St. Gregory Palamas (d. 1359), who has a very prominent place in the sanctoral cycle of Byzantine Catholics, had his orthodoxy impugned by the Assumptionist priest Martin Jugie in the widely cited Dictionnaire de théologie catholique published in 1932 in Paris.

Many Catholics and Orthodox alike have changed their minds on both Augustine and Palamas in light of serious scholarship since the 1960s, but new questions have arisen since then about new martyr-saints. These questions, which came to the fore in 2015 with the slaughter by ISIS of 21 Coptic Christians, are treated in a clearly written and accessible new book by Hugh Somerville Knapman, a Benedictine originally from Australia but currently a priest of Douai Abbey in England. The text itself is only ninety pages, with the remaining thirty-eight pages consisting of notes, bibliography, and an index.

The book opens with an epigraphic dedication to those twenty-one Coptic martyrs, an act which telegraphs Knapman’s ultimate judgment on the question his book set out to answer: if some Christians are canonized by non-Catholic Orthodox churches, how ought Catholics to regard them? Can we accept that canonization and thus call them saints and martyrs too? Or must the pope of Rome also canonize them, or at least make some sort of declaration accepting the Coptic canonization?

Some Catholics raised such questions in 2015 when the Coptic Pope Tawadros II canonized these Christians slaughtered on the beach in Libya. And behind those questions, in the minds of a very fevered few, lurked other allegations masquerading as questions about the Coptic Church’s Christology in particular: aren’t the Copts “monophysites” and thus heretics? Knapman handily cites the relevant Christological declarations signed by Pope John Paul II with the heads of the Coptic, Armenian, and other “non-Chalcedonian” churches, demolishing the myth of monophysitism. No Catholic should ever again use that term to describe the Oriental Churches.

The burden of Knapman’s introduction and first chapter is to lay out some of those questions. The rest of the book traces Catholic understandings of martyrdom, canonization, Christology, and ecumenism from Aquinas through Prospero Lambertini (who would become Pope Benedict XV in 1740) to the Second Vatican Council. From there the author traces out further developments in the writings of Popes John Paul II, Benedict XVI, and Francis. Indeed, it is Francis who “donates” the book’s title: the concept of an “ecumenism of blood” is one the current pope has often used during his entire pontificate, and in very helpful workmanlike fashion Knapman has tracked down all those places where the pope has used that phrase, setting each phrase in context and carefully analyzing it in comparative fashion relative to similar phrases of John Paul II and Benedict XVI.

For Francis, as for Knapman, discussion of an “ecumenism of blood” (sometimes also rendered by the pope as an “ecumenism of suffering”) is significant in two major ways. First it simply acknowledges the astounding fact that “between 2000 and 2010, over a million Christians were murdered for their faith, at an average of over 109,000 each year” (p.x). Those numbers have changed little in our present decade.

But the phrase does much more than function as a sociological descriptor of mass slaughter. As the pope has said several times, those doing these many killings do not stop first and ask who is Protestant, who is Catholic, and who is Orthodox. Thus martyrdom functions as a carrier of substantial theological weight, reminding divided Christians on earth that those who shed their blood in witness to Christ are united with each other around the one table of the Lamb. That example should inspire all of us to work tirelessly for full unity here and now.

In addition to laying out the ecclesiological and ecumenical implications of Catholic Christians recognizing Orthodox martyrs, the author also delves into biblical theology in a fascinating chapter, “The Sacramentality of Blood.” Especially in the Scriptures we see that blood is both the result of sacrifice and the agent of reconciliation. Knapman ends this chapter by returning to Karl Rahner’s notion of blood and martyrdom as “supra-sacramental,” that is, blood functions as an extraordinary visible sign of the deepest invisible union with Christ.

In sum, this book—which would lend itself very easily to parish study groups—is useful not only for answering the question it began with, but also for skillfully handled “detours” into related issues of doctrinal development, Christological controversy, and the status of the Eastern Churches. On this latter point Knapman is heavily indebted to Fr. Aidan Nichols’ Rome and the Eastern Churches, published by Ignatius Press in 2010 in an updated edition.

Its greatest use comes in reminding us to work for unity through the intercession of those whose blood continues to strengthen the Church triumphant and militant alike. Omnes sancti martyres, orate pro nobis!

Zacchaeus, the Silly Tree, and the Meaning of Life