Saint Thomas Aquinas, in one of his commentaries on Aristotle, remarked that “the study of philosophy has as its purpose not to know what people have thought, but rather the truth about the way things are”.i With his new book, Five Proofs of the Existence of God, Edward Feser continues his unfashionable but rigorous quest for the truth about the way things are in relation to God.

In keeping with his usual practice, Feser writes in an entertaining and accessible style, but this time around he uses it to defend his own philosophical formulations (five formal proofs, each with clearly numbered steps), rather than to defend the best academic interpretations of others (Aristotle and Aquinas), as he did in previous books. 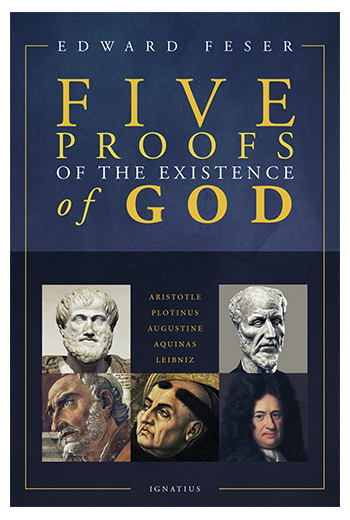 Feser defends the traditional view that we can know the fact of God’s existence. In the very process of arriving at this knowledge, we must necessarily arrive also at an understanding of many of God’s divine attributes. Hence it is a hoary cliché to set the “God of the Bible” at odds with the “God of the philosophers,” as if philosophers have nothing to offer us to assist us in our interpretation of Scripture.

Although inspired by previous work (done by Aristotle, Plotinus, Augustine, Aquinas, and Leibniz), Feser offers five of his own arguments. Informal, dialectical argumentation is first offered preceding each of his five proofs. Then, for each proof, he gives a formal argument in numbered steps, which clearly exhibits the rigorously logical sequence of thought. Finally, he replies to whatever objections he can anticipate contemporary thought would make. I found these latter discussions particularly enjoyable, especially whenever they engaged with objections inspired by the strongest modern scientific theories, like relativity or quantum mechanics.

The first five chapters of Five Proofs of the Existence of God set forth Feser’s own variations on five arguments found in the grand tradition of natural theology. Natural theology is the philosophical discipline that traditionally offers indispensable assistance to biblical theology, by supplying it with natural reason’s best arguments and distinctions about the nature of God. Whether all readers are convinced by Feser’s proofs or not, Feser’s lively approach in this book nonetheless demonstrates at least this much: despite all their bluster, natural theology’s funeral directors will inevitably be buried first. Feser takes a shovel to them.

His logical tenacity is exhibited well beyond the five proofs of the first five chapters, as the book’s sixth chapter proceeds both to reiterate and expand upon the arguments of the first five chapters’ reasoning about God’s own attributes. Feser’s persistence on this point pays off as he clearly exhibits how we may attain very good rational knowledge about the divine attributes. Moreover, this detailed knowledge, attainable by natural reason, is shown to be in perfect harmony with the attributes of God described for us by divine revelation, such as his omnipotence and perfect benevolence.

Finally, the seventh chapter, as with the previous chapters, patiently replies to the many possible objections to natural theology. Devastating replies from earlier chapters are repeated here and also added to, as Feser organizes his defense into a more comprehensive dialectical toolkit. For many people, this will be their favorite part of the book. After all, it provides a handy compendium of enlightening and charitable replies to whatever ridiculous or obnoxious things they themselves may hear people say. Feser takes the supposedly most devastating objections to natural theology and entertainingly exposes them as surprisingly flimsy.

I always enjoy Feser’s bracing logical rigor, as well as his scrupulously fair way of assessing competing lines of argumentation. He is refreshingly candid, though, about letting you know where he stands in any controversy. His straightforward approach fits well with my favorite parts of this book, which are the formal arguments themselves. The numbered steps invite further exploration via logical analysis, and I found great pleasure in being able to translate Feser’s arguments into symbolic logic as I studied them closely.

In my judgment, this book is (as I have already remarked elsewhere) “a significant, original philosophical contribution to the scholarly discipline of natural theology”.ii My own analytical assessment is that the formal arguments are all logically valid, and Feser’s informal dialectical arguments make a strong case for the truth of all his premises.

The only weakness I detect is in his third argument, which I think commits a petitio principii similar to Anselm’s ontological argument, as a logical analysis of the formal argument clarifies that Feser’s “Augustinian proof” presupposes that the mode of existence of all abstract ideas is such that only a divine intellect could be their origin.iii

Nonetheless, if combined with argumentation from Aquinas’ Third Way, I think that this flaw in Feser’s “Augustinian proof” can be eliminated, since the Third Way could permit us to derive the relative degrees of actual necessity in abstract ideas in a non-circular way, i.e., as being abstracted from the actual existence of the physical universe. Without beginning from an actual feature of the universe known to the senses, Feser’s third proof (unlike his other four proofs) begins in “mid-air” in a way that is structurally similar to Anselm’s ontological argument.iv

Still, Feser’s proof is skillfully constructed such that it could be harmonized with a longer, more Thomistic argument that could plunder Aquinas’ Third Way for some required premises. Perhaps he refrained from doing this because of his professed desire for his book’s five proofs to be considered by the reader separately from Aquinas’ Five Ways. (Interestingly, careful readers will notice that later in the book Feser often implies that he is aware of this difference between his third proof and his other proofs, since he lumps the other four proofs together when speaking of their common features.)

As I have already indicated, the truly fresh approach of Feser’s book lies in its laser-like focus on truth, rather than on fine-tuning contested interpretations about who meant what whenever they wrote. In the book’s very first sentence, Feser unmistakably signals his desire to stick to investigating the truth, and nothing but the truth, by stating: “This is not a book about Saint Thomas Aquinas’ Five Ways.”

The book thus deliberately chooses not to focus on how critics have misread and misunderstood Aquinas’ brief outlines of how the mind can understand God. Feser has already dealt at length with the colossal failures of academic criticisms of Aquinas in his previous books, such as Aquinas and The Last Superstition. Instead, he clears the decks here, by turning from the tedium of contesting the endlessly bad textual interpretations of Aquinas, to speaking instead in his own voice and asking his readers to impute all praise and blame for these proofs to Feser himself.

It’s a boldly productive move, and more significant than most people realize. Because while (for argumentative purposes) Feser may deny it, the five proofs here are nonetheless (in my opinion) fresh, contemporary ways of defending the core insights that generated the famously sketchy outlines found in Aquinas’ Five Ways.

However, I think Feser is right that, to vindicate Aquinas’ natural theology, we need to move the discussion forward in more productive ways. We need to stick more to debating the truth of any given proof, and not so much to wrangling over what someone meant when he said something, if he is not here to answer in his own name. Because Feser’s here, and ready to argue back.

In other words, today we need not so much to study what Aquinas thought, but rather the truth about being. And if they end up converging? Well, that’s great, but first let’s emulate Feser’s dogged concern in this book with simply seeking the truth and expressing arguments clearly.

iiiCf. Paul Weingartner, God’s Existence. Can It Be Proven? A Logical Commentary on the Five Ways of Thomas Aquinas (Frankfurt: Ontos Verlag, 2010), 21–27.

About Christopher S. Morrissey 34 Articles
Christopher S. Morrissey teaches Greek and Latin on the Faculty of Philosophy at the Seminary of Christ the King located at Westminster Abbey in Mission, BC. He also lectures in logic and philosophy at Trinity Western University. He studied Ancient Greek and Latin at the University of British Columbia and has taught classical mythology, history, and ancient languages at Simon Fraser University, where he wrote his Ph.D. dissertation on René Girard. He is a managing editor of The American Journal of Semiotics. His poetry book, Hesiod: Theogony / Works and Days, is published by Talonbooks.

Secularization, Marxism, and the Enlightenment in Augusto Del Noce

It is common today to hear people talk of secularization. It is particularly frequent in the discourse of people who see it as a problem. However, it is often the case that the term is […]

“You’re a monster!” screams Madison Russell (played by Millie Bobby Brown) in Godzilla: King of the Monsters. She screams this at her mother, Dr. Emma Russell (Vera Farmiga), who has just made the decision to […]

Revisiting and understanding the “Galileo Affair”

“The Galileo Affair needed to be looked at again,” says Dom Paschal Scotti, “because it is one the great events, climactic events even, in European […]