In The Flying Inn, Chesterton’s comic dystopian tale, a shadow has fallen over England. Teetotalling progressives and Muslims have joined forces to control the country, and have banned the sale of alcohol. But one brave Irish Captain, his innkeeper pal, and a bulldog mutt named Quoodle launch a private rebellion for the sake of sanity. Driving around with their last cask of rum, a giant wheel of cheese, and a portable tavern sign, our heroes provide a kind of movable feast to the oppressed common people of England. In doing so, they strike a blow for the good, sound, and solid things that God has given to all men: meat and ale and song, and the human fellowship that attends them. 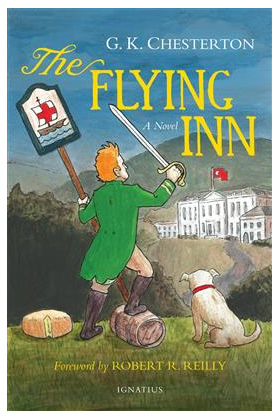 On the one hand, we have the radical utopian project of the liberal elites, whose leader, Lord Ivywood, declares blasphemously that “[t]he world was made badly . . . and I will make it over again.” They burn taverns and ban alcohol to prevent the working classes from spending their money on drink. They object to meat-eating on humanitarian grounds, for—as one of them suggests—even oysters have feelings. But for all their enlightened love of humanity and their sympathy for animal suffering, the progressives care little for actual men and real animals. The gentleman poet who passionately defended the suffering oyster, for instance, wears a fur coat, and makes his chauffeur work all day without ever stopping for meals. And as Chesterton puts it, “Lord Ivywood did not care for dogs. He cared for the [humanitarian] Cause of Dogs.”

On the other hand, we have the mad Muslim Prophet of the Moon, Misyra Ammon, who insists that all English culture originally comes from Islam. With earnest fanaticism, he defends polygamy as empowering women, because it allows them “to be present in so large numbers.” The prophet gains a following of progressive elites, who sit and nod respectfully during his ludicrous lectures. Soon, England sees the Koran included in the Bible, and a crescent upon St. Paul’s Cathedral.

In short, England has gone utterly mad. As the hero, Captain Patrick Dalroy marvels, “Man is liable to err—especially when every mistake he makes is called a movement—but why should all the lunacies live together?”

But for Chesterton, this madness has a metaphysical cause in the rejection of God. If we forget God, we will also forget Man, made in God’s image and likeness. So our vision of the world becomes increasingly inhuman and inhumane. Also, Islam’s rejection of the Trinity means that God does not have loving fellowship within Himself. The Islamic mystic insists that his creed “has put no man higher than a prophet, and has respected the solitude of God.” Furthermore, its rejection of the Incarnation means that man’s flesh and the created order have not been sacramentalized, made holy, or given any higher meaning. For the Christian, the common things of man can take on spiritual significance thanks to God’s intervention into the material world. As the oyster-defending poet, after being converted to the rum-and-cheese rebellion, exclaims, “And how holy this cheese tastes!” Captain Dalroy responds: “It has gone on a pilgrimage . . . or rather a crusade. It’s a heroic, a fighting cheese.” We can see Chesterton grinning as he writes this, but it’s also a serious claim.

Along the way, as the plot flies to its climactic confrontation between our hospitable heroes and the nefarious forces of Islamic England, Chesterton’s gleeful exaggeration satirizes the many-headed Hydra of modernity. Abstract modern art is “bad wall-paper; the sort of wall-paper that gives a sick man fever when he hasn’t got it.” So-called higher criticism of the Bible finds that Christ’s miracle of filling Simon’s fishing nets was in fact done with “stuffed representations of fishes artificially placed in the lake.” A crackpot German doctor who believes in earthly immortality claims that dying is merely “traditional,” then creates a utopia of barefoot, bearded people living entirely on milk. Clean eating, radical secularism, Islam, and scientific nonsense converge in Chesterton’s imaginary post-Christian West. It’s a bizarre and hilarious world, but it’s often uncomfortably close to home.

Chesterton’s style shines with his characteristic paradox and pithy zingers, but it has its weak points. His fiction can be talky—working out ideas instead of character or plot, and there’s a staged quality to the debates between the people of his novel. Today’s readers may object to some racial slurs common to Chesterton’s day, and we may find his portrait of Islam to be somewhat caricatured. Yet running through all of Chesterton’s exuberant and imaginative writing is perhaps his greatest gift: his clear-eyed understanding of what’s wrong with the world. In book after book, Chesterton fishes out whatever false premise lies at the heart of a bad philosophy, a false religion, or a dystopian society. With charm and good humor, he diagnoses the disease, and points us smilingly to the cure.

And along the way, we always find ourselves swept up into a rollicking quest. As Chesterton says of Captain Dalroy at the outset of the novel: “The steep road looked like the beginning of an adventure; and he was an adventurer.”

Does the West face “an almost certain doom”?

“Islam, as the jihads in Spain, France, Italy, and Asia Minor show, was hostile to the West from its inception. There was no peaceful co-existence.; there were only brief periods in between jihad invasions. Christian […]

Reminiscent at times of the fiction of George MacDonald, Benson’s stories range from beautiful to macabre. […]