What Descartes set in motion in the world of thought, Luther a short time before had set in motion in religion:  the solitary individual standing in judgment on tradition, having to verify for himself each and every claim on penalty of being less than human, or less of a Christian. – Ralph McInerny

Even in more serious conservative circles the Reformation is a topic often avoided.  A great number of those who resist the project of global liberalism are themselves Protestant, after all, while many of those who aren’t see no point in dividing the conservative camp by reigniting a five hundred year quarrel—a quarrel which at first glance looks rather quaint in a century marked by mothers in combat boots, government-mandated cakes for gay “marriages,” and fetal organs sold for medical research.  Moreover, some traditionalist Catholic critics of Protestantism themselves discredit efforts at serious critique insofar as they appear less interested in actually persuading people than in being as abrasive and triumphalist as possible.  My own view is that if we aim to challenge the status quo of advanced liberalism we should always take care, lest venting spleen upon the politically-safe targets of a proto-liberal era long past becomes a kind of compensation for our timidity vis-à-vis the cutting-edge idols of the Revolution as it actually exists today.  After all, neither Hollywood nor academia have much invested in John Calvin, nor is the federal government likely to erect a giant statue of Martin Luther on the Washington Mall. 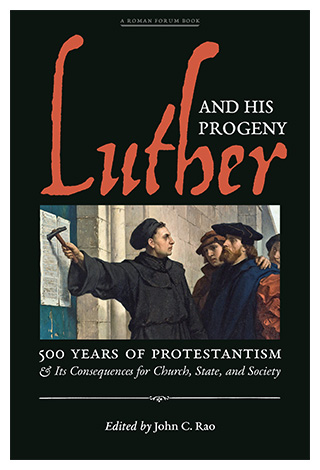 Yet even if the typical millennial would barely recognize their names, the Protestant reformers are of enormous objective significance, and it is futile to try to understand modernity without taking into account their legacy.  Nor are they themselves such an entirely esoteric subject.  In the here and now Luther is still very much a living controversy, thanks in no small part to Pope Francis’ enthusiastic remarks pertaining to the 2017 jubilee honoring the famous Augustinian friar.  So Luther and His Progeny: 500 Years of Protestantism and Its Consequences for Church, State, and Society is no gratuitous shot out of the blue.  “Convinced that many [Catholic] ecclesiastic leaders would turn 2017 into a year-long celebration of the accomplishments of Luther & Company,” explains the book’s Introduction, the faculty associated with the Roman Forum felt obliged to hold a conference. “Catholics need to be aware of what an historical, theological, and socio-political travesty” any Catholic celebration of the Reformation must necessarily be.  So if a few of the essays strike the reader as excessively polemical at times – one contributor puts scare quotes around the word “theology” where Luther’s is concerned, while another offers the Latin pun “Lex Luther” to describe the Reformation’s impact upon the European order – it must be remembered that the writers have been sorely provoked.

Though a Protestant might in good faith argue that the Reformation was a necessary evil, it is hard to see how he could deny that it was shortly followed by what Sebastian Morello calls “the sundering of faith and reason,” and “the separation of grace and nature.” Hence until recently it has been normative for Catholics to read “the Reformation as an attack on the principle of tradition and the very identity of Christendom.” As his French and Russian successors were political revolutionaries, so was Luther a theological revolutionary, continues Morello, and a revolutionary who deliberately undid much of the work of innumerable Christian thinkers.  Some of the quotes Morello and his colleagues relate are startling.  “St Augustine or St Ambrose cannot be compared with me,” proclaimed Luther at one point, and at another declared:  “For nothing do my fingers itch so much as to tear off the mask from that clown, Aristotle.”

Then again, as the attorney-historian Christopher Ferrara asserts, in our time irreverence toward the Church Fathers and rejection of Aristotlean anthropology are as common among Catholics as among Protestants, if not more so:

The great majority of Catholics are now de facto Protestants – indeed, very liberal Protestants whose practice and views on contraception, abortion, divorce, and “gay marriage” are now more liberal than even the views of the most conservative Protestant evangelicals, who condemn the papacy today not because it is the whore of Babylon but because it has gone liberal.  Even Luther, who likened contraception to sodomy, would view with amazed incomprehension the liberal wreck that is most of the human element of the Catholic Church today.

Needless to say, the very areas where Luther would actually agree with the Church’s teaching and dissent from the liberal status quo are precisely the areas ignored by those keen on honoring him.

John Rao, who teaches European History at St. John’s University in New York City, is the mastermind behind this collection, so while it is certainly an unabashed broadside against what one reviewer has called “feel-good ecumenism,” it also represents some very well-developed scholarship. In one of Rao’s own two contributions he investigates the many political forces that fueled Luther’s revolt, from the impoverishment of lesser knights to peasant uprisings to Italian-German ethnic tensions. In his second contribution Rao considers “the tactics that segments of the Protestant world adopted to avoid the logic of their guiding principle.” That is, to keep from being broken apart by a spiritually and socially destructive Protestant individualism, Protestant princes (beginning with Luther himself) discovered principles that look eerily Catholic.  For his part Rev. Richard Munkelt argues that the consumer-hedonist mindset has its roots in the Reformation doctrine that fallen man is absolutely and totally corrupt.  This point is reinforced by Brian McCall, who adds that the Protestant doctrine sola fide denies “concrete supernatural or eternal consequences from failure to observe [moral norms], leaving only earthly economic consequences.”

In his study of “negative liberty,” Monsignor Ignacio Barreiro-Carambula touches upon themes of special interest to all counter-globalists, whatever their views about Luther:

To be ‘rooted in the soil’ means to be anchored in what is concrete and permanent, in what can be touched and experienced – and provide a bridge to something that is everlasting.  A man who is not rooted in the soil suffers the most extreme form of homelessness and alienation and tends to be moved by constant and shallow passing experiences that in the end leave him more anguished and empty than when rooted.  Being rooted in tradition prevents us from being imprisoned solely within contemporary presentations of what is, and is not, real.  This happens because rootedness in historical experience provides us with the interpretative tools we need to discern what is real from what, in the end, is unreal.

The tragic result of the Protestant experiment, concludes Barreiro-Carambula, is “an autonomous individual, without any roots grounded in his family, regional and national traditions, and in his Creator.”

The history of science might seem a topic far removed from that of Luther and His Progeny, but Fr. Brian Muzas thinks otherwise.  We can only think clearly about the Galileo affair, explains Fr. Muzas, if we consider it in the context of the Catholic reaction to Protestantism.  “[B]y the time Galileo sought to change doctrine on the basis of his hypothesis,” Fr. Muzas points out, “the Catholic Church was extremely sensitive to the charge that Catholicism was anti-scriptural.  The Catholic Church reacted to Galileo, at least in part, due to this sensitivity.”

Fr. Muzas goes on to clarify the reasons why the conventional science-versus-religion narrative does not fit Galileo’s case:

For a start, the Catholic Church endorsed the scientific consensus of the period, which, on the basis of the available evidence, held that the earth was stationary in the middle of the cosmos.  To this extent it might be better to characterize the episode as a conflict within science (or, more strictly, within astronomy and natural philosophy) rather than between science and religion.  Second, the first use of the Galileo affair for propaganda purposes was by Protestants seeking to discredit Catholics, so that it was initially given a role in conflicts within religion […] even if it could be constructed as a science-religion conflict, the condemnation of Galileo was not typical of the Catholic Church’s attitude toward the study of nature, since at the time the Church was the single most prominent supporter of astronomical research.

While reading this book I found myself drawn again and again to the question of how we should have acknowledged the 500th anniversary of Luther’s theses.  It goes without question that a proper commemoration would have included a highly-publicized, ecclesiastically-supported symposium very like the one upon which the book under review is based.  This is not to say that a proper commemoration need have dwelt only upon Luther’s errors. In lieu of either the feel-good ecumenism of the commemoration in Lund, Sweden earlier this year, or the sophisticated yet (naturally) one-sided critique of Luther and His Progeny, Lutheran and Catholic scholars could have come together to exchange views in a Christian spirit of civil but honest debate.  The more ecumenically-minded Catholics might have put a spotlight upon particularly impressive Lutherans, including Dietrich Bonheoffer or Werner Heisenberg.

When all is said and done, however, the central thesis of Rao and his colleagues is not just correct, but self-evidently so.  To celebrate Luther himself is impossible. Given the Holy Father’s tone toward those Catholics who fail to exhibit sufficient zeal for his manner and methods, it seems literally absurd for him to praise a man best known for violently and unequivocally rejecting papal authority.

Luther and His Progeny: 500 Years of Protestantism and Its Consequences for Church, State, and Society
Edited by John C. Rao
Angelico Press, 2017
Paperback, 290 pages

Seven Last Words from the Cross: “This day you will be with Me in paradise”

Preachers who suggest that Dismas (as tradition speaks of him) “stole heaven” do not do justice to the gratuity of salvation. For in a sense, […]

Lessons from the Holy Maccabees

Editor’s note: The following homily delivered by the Reverend Peter M. J. Stravinskas, Ph.D, S.T.D., on 1 August 2017, commemoration of the Holy Maccabees (Extraordinary Form) at the Church of the Holy Innocents in New […]