Editor’s note: In recognition of the anniversary of J.R.R. Tolkien’s birth on this day in 1892, we are reposting this review, originally published on Dec. 18, 2020.

Middle-earth is almost as vivid a character in J.R.R. Tolkien’s work as any sentient being who walks upon it. Its finely detailed vistas read like descriptions of actual places. The believability of the setting invites belief in the stories that unfold there. For both readers and characters, “landscape become a way to chart interior as well as exterior journeys.” 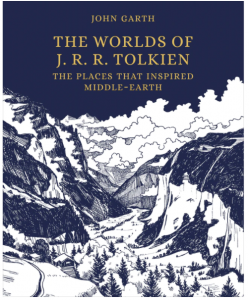 How did Tolkien “subcreate” so compelling a Secondary Universe? He wrote what he knew. What Tolkien knew and how he knew it is the basis of John Garth’s lavishly illustrated book The Worlds of J.R.R. Tolkien: The Places That Inspired Middle-Earth. But its scope is far broader than simply matching text and scenery. Here Garth explores and evaluates many sources that fed Tolkien’s imagination: personal experience, literature, lore, language, and history as well as locales—real or fictional. Garth shows the same diligence and sympathy here as in his acclaimed study Tolkien and the Great War (2003). His critical voice is refreshingly gracious throughout.

Garth begins at the very beginning. At age three, Tolkien sailed from his natal South Africa to his ancestral England. He exchanged sun-baked Bloemfontein for the green and pleasant West Midlands, a transition with profound impact. As Garth says, “The sudden dislocation between old and new world also gave Tolkien a kind of visionary superpower.” His mental picture of his surroundings became a double exposure, the actual projected onto the imaginary, the imagination actualized.

Thus the village of Sarehole, Tolkien’s beloved childhood home, became a rough template for the Shire and its inhabitants for Hobbits. Then he added other Midland vistas, private jests, Icelandic architecture, and linguistic games. He even—according to Garth—based the Hill at Hobbiton on art in a Shell Oil advertisement. Tolkien’s profound love of Nature sprouted in the green dells of Sarehole.

Garth follows Tolkien’s pattern of observing and hybridizing across his major cultural influences, summarized as winds from the four directions. From the North came Anglo-Saxon, Germanic, Nordic, and Finnish currents. These had the greatest impact on his writing and scholarship. Northernness is perhaps the most studied aspect of Tolkien’s legendarium, but it is far from his only source of inspiration.

The West brought Celtic elements such as Irish Faëries, enchanted islands, and Arthurian themes despite Tolkien disparaging them as “mad” as well as “incoherent and repetitive.” (Warning: do not use individual comments as proof texts. Tolkien was evasive and often changed his mind about his own material.) Even farther West lay American Indian lands, settings for The Song of Hiawatha and the Leatherstocking Tales, which had thrilled Tolkien from childhood. He borrowed their perilous journeys and primeval woodcraft.

Although Tolkien’s use of classical antiquity is underappreciated, Garth gives the South its due. After all, Tolkien’s education was grounded in Latin and Greek. The fortunes of Men echo Homer, Virgil, the legend of Atlantis, and the history of the Roman Empire. Garth also notes a certain nostalgia for his hot, dry African birthplace that blended faint memories with medieval images of such places.

The East that Tolkien drew from was Mesopotamia, both historical and as fantasized in medieval Alexander Romances and The Travels of Sir John Mandeville. Dwarvish names do sound Semitic but Garth claims the same for the language of Númenor and those based on it. This section is the only place that he notes Biblical parallels: The Tower of Babel and Noah’s Flood. Perhaps Garth felt that the Bible and Tolkien’s Catholicism had been thoroughly analyzed elsewhere but this is an odd omission in his book.

Tolkien proposed his theory of fantasy-writing as the “subcreation” of a Secondary World in his famous 1938 essay “On Fairy Stories.” But he did not build first and plot later. He “discovered” his plot as he shaped and reshaped his world, niggling away at revisions until the very end of his life. Garth maps the torturous process that transformed England-as-Elfland into Middle-earth and pinpoints personal references embedded therein.

Garth organizes the deep imprint of Nature on Tolkien’s work in chapters about the sea, mountains, water-lands, and forests. Curiously, these environments are principally landscapes without ecologies. Ordinary wild animals seldom appear on Middle-earth. The sea, first seen on Tolkien’s childhood voyage to England, expresses transcendence, change, and separation—yet he loved it. His favorite family vacation spots were seashores and he initially retired to Bournemouth on the south coast of England.

Mountains set in vast majestic spaces enthralled Tolkien ever since a hiking tour among the Alps in 1911. Their vistas beckoned like untold stories. He would later turn the Lauterbrunnen Valley into Rivendell and the Silberhorn into Celebdil/Mount Silvertine/Zirakzigil, the peak where Gandalf slew the Balrog. Going down rather than up five years later, his honeymoon visit to Cheddar Gorge would yield marvelous caves in Middle-earth. A lifelong interest in geological processes, especially vulcanism, helped Tolkien create scientifically plausible landforms. In tribute, astronomers have given names of his fictional mountains to fourteen sites on Jupiter’s moon Titan.

Tolkien’s trip to Switzerland also exposed him to the dramatic gorges of the Rhine, a possible model for the Anduin, the greatest river of Middle-earth. England’s lesser waterways, lakes, and marshes also left their traces on his imaginary places, as boundaries, pathways, or obstacles. Water is holy, for it sustains life and the sounds of flowing water preserve the Music of Creation.

“A deep feeling for trees is Tolkien’s most distinctive response to the natural world,” says Garth. Whether golden Lothlórien or malevolent Mirkwood, forests are “places of liberty or entrapment, refuge and terror.” Forests carved of stone adorn elvish palaces. A cathedral of trees forms the home of Treebeard the Ent who leads the trees he shepherds against wicked Saruman’s tower. Tolkien even incorporated the memory of his wife Edith dancing in a flowery glade in his tale of Beren and Lúthien. But the destruction of trees and the devastation of green countryside are signature works of evil in all Ages of the legendarium. Their restoration signals the regeneration of Middle-earth.

Tolkien’s interest in archaeology happily arose in an era of dramatic discoveries in England. Prehistoric barrows, forts, stone circles, “lake villages,” and the White Horse of Uffington as well as Roman and medieval ruins, existing lighthouses, and towers have counterparts in the legendarium. Literary structures like the Biblical Tower of Babel also inspired Tolkien. The King of Rohan’s golden hall is closely modeled on the royal seat in Beowulf. Garth even links Galadriel’s realm with that of Ayesha in H. Rider Haggard’s She.

Not only do Tolkien’s own drawing and painting reflect the Arts and Crafts style of his youth, he shared that movement’s aversion for mass-produced industrial goods. The legendarium is packed with beautiful handcrafted artifacts, from the Silmarillion’s gems to Sam’s rope. But Tolkien had the misfortune to see his boyhood village, his old grammar school, and the small workshops of Birmingham swallowed up by large scale industry and commerce. Even Oxford had automobile factories. Ruined fields and polluted waters of Middle-earth derive in part from these sad sights.

But the scars of the Industrial Revolution were overshadowed by the industrialized horrors of the ill-named War to End All Wars. Garth’s work on his Tolkien and the Great War fills this chapter with horrific imagery and poignant detail. Every tortured landscape in the legendarium came from Tolkien’s lived experiences during the 1916 Battle of the Somme. (His regiment, the Lancashire Fusiliers, left a long honor roll of names on the Thiepval Memorial in Picardy and appears in Peter Jackson’s exceptional documentary, They Shall Not Grow Old.) In defiance of the looming darkness, Tolkien began to write his epic tales. “It was in this world of disaster” says Garth, “that Middle-earth, like a flower in No Man’s Land, first burgeoned and bloomed.”

Descriptions of content dominate this review in an attempt to convey the breadth and intricacy of Garth’s book. Generations of critics have studied Tolkien’s sources in minute detail, but none has integrated information and insights with visuals as elegantly as Garth has done. He shows how the imaginary landscapes of Middle-earth proclaim the wonder— peril—of reality. The Worlds of J.R.R. Tolkien would be a splendid addition to any Tolkien-lover’s library.

About Sandra Miesel 27 Articles
Sandra Miesel is an American medievalist and writer. She is the author of hundreds of articles on history and art, among other subjects, and has written several books, including The Da Vinci Hoax: Exposing the Errors in The Da Vinci Code, which she co-authored with Carl E. Olson, and is co-editor with Paul E. Kerry of Light Beyond All Shadow: Religious Experience in Tolkien's Work (Fairleigh Dickinson University Press, 2011).

Recently the capacious novelist Jonathan Franzen disclosed an ongoing preoccupation with “the inescapable nature of religion.” This is welcome news from unexpected quarters, proof that (as Pope Benedict XVI puts it) “men today feel the […]

What’s missing in the “Tolkien” biopic

This weekend, American movie theaters will feature the first-ever biopic of J.R.R. Tolkien, the most important fantasy writer, and the most popular writer to have thought through the moral and political changes Christianity brought into […]