Since the advent of Islam in the seventh century in the Arabian peninsula, Catholics have looked for ways to share the Good News of Jesus Christ with Muslims. While Islam does recognize Jesus Christ as a prophet, it denies Christ’s divinity and instead considers the Prophet Muhammed to be the last and greatest prophet sent by God.

For this and other reasons, Islam has shown itself to be very resistant to proclamations of the Gospel. But that doesn’t mean Christians haven’t tried.

Perhaps the most famous attempt to evangelize Muslims occurred in 1219 when Saint Francis of Assisi (1181-1226) traveled to Egypt with companions from his new order of friars. He had a simple goal: bring the famous Muslim sultan, Al-Malik al-Kāmil, to conversion and thereby stop ongoing war, violence, and persecution of Christians in the Holy Land. Francis expected martyrdom and was even ready for it. Instead, the sultan sent him away in peace, which was probably a relief to Francis’ Christian companions but was a disappointment to the saint. However, the Franciscan order has been given custody of Catholic holy sites in the Holy Land for several centuries as a result of the good will created by the saint of Assisi, a sign that Francis’ holiness was not without effect.

On June 29th, the Church commemorates another holy man who felt called to reach out to Muslims. Blessed Ramon Llull (1232-1316) is not as well known today as Saint Francis, but he was born in Spain only six years after Francis died in Italy. Like Francis, Ramon was born into a wealthy family and had secular plans for his life until a vision of the crucified Christ changed his heart. But unlike Francis, Ramon was a married man with children and a position in the king’s court at the time.

However, the call of Christ was too strong for Ramon, and he left everything and everyone behind to become a Franciscan tertiary. What did Ramon think God was calling him to do? Bring Muslims to Christ. How did Ramon think he could be most effective in spreading the gospel to Muslims?

By the thirteenth century, Muslim scholars had rediscovered the works of ancient Greek philosophers and were studying philosophy, mathematics, and science, using the writings of the Greeks. The wisdom found in these writings later caused European Catholics including Saints Thomas Aquinas and Albert the Great to argue in favor of studying these Greek works. They, along with other Catholic scholars, used Greek philosophical concepts to invigorate Catholic theology and philosophy.

Ramon recognized this popular interest in Greek philosophy as an opportunity to reach Muslims. He therefore learned Arabic, as well as philosophy, theology, and science, and he wrote hundreds of works in multiple languages, all designed to start conversations between Muslims and Catholics. While few of his works are currently available in English and while he’s now remembered more for his mystical poetry, he was unquestionably an outstanding apologist to Muslims in his day.

If Blessed Ramon were alive today, what would he do to introduce Muslims to Christ? Where would he encourage us to go, to reach out to Muslims who are willing to talk to us?

The internet, of course. An excellent recent article, “Poking Holes in the Koran”, explains how many Christians have been making use of online platforms—and the pandemic—to carry on a debate with Muslims about the Koran. Catholics and Evangelical Protestants have been quietly utilizing the modern tools of historical criticism to point out that there are variants in copies of the Koran, a provable fact which undermines Islamic claims about the history of the Koran. While this online battle for souls is still going on, its success so far shows that sharing the Gospel with those who seem farthest away from us is always possible, with God’s grace.

Saint Francis and Blessed Ramon would be proud.

About Dawn Beutner 59 Articles
Dawn Beutner is the author of Saints: Becoming an Image of Christ Every Day of the Year from Ignatius Press and blogs at dawnbeutner.com.

‘Everybody needs a little Jesus’: How a Catholic repair man brings his faith into his work 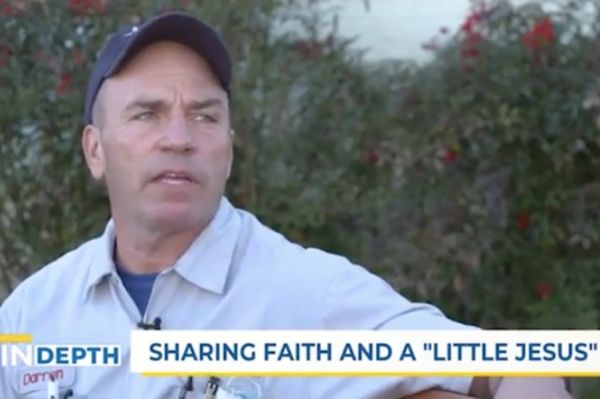 On the Trinity, Triangulation, and Islam

Prior to global positioning satellites, celestial navigation determined a position on the globe based a reading of the stars. With a sextant three intersecting lines are charted, derived from star fixes above the horizon. The […]