John Anthony McGuckin is without doubt one of the world’s leading scholars of Eastern Christianity, patristics, and Church history. Having taught at Columbia and Union Seminary in New York City, he returned to his native Britain several years ago to take up a post at Oxford. An archpriest of the Romanian Orthodox Church, he is author of several books—biographies, history, handbooks, encyclopedias, and prayer books—he writes with what seems to be prodigious and elegant ease. That is no less true in this new book, The Eastern Orthodox Church: A New History. 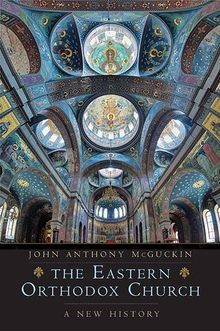 Catholics should read this book, for it is our history as well. Saying so is not just some piece of proleptic and ecumenical sentimentality; rather, it follows the guidelines laid down more than twenty years ago by Rome about how Catholics should regard our history of past divisions and our hope for the healing of those memories—as I recently argued elsewhere.

The book opens with something of an apologia for its method and its limitations, noting that it will focus only on the Byzantine Orthodox churches, not on the so-called Oriental Churches—the Copts, Armenians, and Syrians, inter alia, though they do show up briefly late in the book’s discussion of Christology, where the Coptic arguments in particular are given brief but fair-minded treatment.

In addition, the most striking feature of the prelude is the author’s refusal to see Orthodoxy reduced to the category of a denomination, a term he makes a point of disputing whenever it is presented in either faculty meetings or public lectures. This is not just an academic being picayune: it underscores the author’s admirable and unapologetic belief—which every Catholic could and does share—that scholars must “approach the concept of church transcendentally before they do sociologically”. But the language of “transcendental” can often be vague and desiccated, so McGuckin immediately makes clear that such an approach to the Church must be concretely grounded in her sacramental life in Christ. Thus McGuckin says—in phrases almost indistinguishable from the opening lines of Lumen Gentium—that the Church is a “sacramental sign” and its role is to manifest “the presence of Christ in the world”.

With these and a few other preliminaries having been gently but firmly placed on the table, we may now settle down to feast on the first three chapters, which are thrilling. Forgive the cliché, but these three alone are worth the price of the book. The author makes it very clear in pellucid arguments and examples—with which no Catholic could have any quibble—that if we want to understand not just church history, but Christianity as such, then we must spend a lot of time listening to the voices of the first several centuries, starting with the apostles. The author gives us a tour through the New Testament to show that those diverse writers are all ordered to Christ’s resurrected glory. Along the way, with amusing and enviable ease born of long learning, McGuckin throws some shade on the modern fetishizing of non-canonical writings because they violate the lovely and memorable maxim of Origen of Alexandria (arguably antique Christianity’s greatest biblical scholar): “Nothing unworthy of God’s majesty.”

Apart from Origen, McGuckin next gives us a quaternity of Fathers: Athanasius of Alexandria, Cyril of Alexandria, Gregory of Nazianzus (or “Gregory the Theologian” as McGuckin, following Eastern practice, calls him, in a move similar to—though used far less often than—the Latin Church’s honorific of “doctor of the Church”), and Maximus the Confessor. There is no doubt that all four played an enormous part at the first several ecumenical councils, though Maximus’ role was less direct—but more costly to him—and Cyril’s role was more direct and far less felicitous than the other three. (In Newman’s memorable words, one cannot deduce Cyril’s holiness from his actions, which I once heard the Byzantine Jesuit historian Robert Taft call “thuggish”).

The chief virtue of these chapters is not only how they condense complex Christological debates in a way that those with little background can make sense of them, but how they also show what a vigorous and even exciting time it was in the Church’s history as these debates are taking place. My students, alas, recoil from the conflicts of the councils, but McGuckin makes them almost appear fun—in a non-flippant way—while also being serious. Here he reminds me of nobody so much as Hans Urs von Balthasar, especially in his Presence and Thought: Essay on the Religious Philosophy of Gregory of Nyssa, which Ignatius Press published many years ago now. In the introduction to both books, one gets a sense of how exhilarating it must have been to be alive during this time—at least for those of us who love the cut and thrust of real debate in a way almost completely absent from our intellectually stunted culture today.

Some of the thrill and energy of the first three chapters begins to slow as we get into later chapters which plow through the mud of conflicts Orthodoxy had—with the papacy, with Islam and, still later, communism. There are three lacuna in these chapters.

First, McGuckin rather tendentiously invokes that tired old slogan about the pope of Rome having merely “primacy of honour” which (though never made explicit here), is taken to mean he was a toothless titular, a pious old buffer devoid of any concrete authority. Not so, as the eminent Jesuit historian (and Ratzinger Prize-winner) Brian Daley showed in a landmark 1993 article revealing that modern notions of primacy of honor retroject their own vacuous understanding back in time, overlooking the fact that popes had real primatial powers which were honored, sometimes in the breach, and sometimes resentfully, by others, but were real and significant nonetheless.

The section on Islam is good, though I would suggest somewhat hampered by (I presume) the author’s desire to be brief and not burden the book with too many references, which is unfortunate as it deprives the reader of even a mention of the very great deal of scholarship published on relations between Muslims and Eastern Christians in the last quarter-century. Some of the most interesting scholarship shows that received narratives—to which some Orthodox Christians are prone—of never-ending suffering under Islam overlook periods and places of amicable relations, close co-operation, and even (as Catholic scholars Sidney Griffith and Gabriel Said Reynolds, inter alia, have repeatedly shown) inter-textual influences and borrowings of the gospels by the Quran.

More problematic for a Catholic reader is that McGuckin does not disturb other received renderings by Orthodox apologists about Byzantine Orthodox treatment of both the Oriental Orthodox and Oriental Catholics, in both first and second millennium. At the same conference where I heard Taft speak of Cyril’s thuggish treatment of other Christians, he went on to tell the dolorous history of Byzantine Orthodox persecution of Copts and Armenians in the first millennium, and of Eastern Catholics in the second, thundering from the lectern, “None of us has clean hands!”

Yet McGuckin seems to give the impression of Byzantine Orthodox having mostly clean hands. Only in one place does he aver to the fact that post-war persecution attempted to destroy the Romanian Byzantine Catholic Church. This ignores the even greater destruction next door when Stalin, with the co-operation of the Russian Orthodox Church, shut down the Ukrainian Greco-Catholic Church (UGCC) in March 1946 by means of what every serious history recognizes was a pseudo-sobor in Lviv. (My own book, forthcoming from Peeters in Belgium next year and co-edited with Daniel Galadza, treats the events of 1946 and subsequent relations between Russian Orthodox and Ukrainian Catholics as we continue to struggle towards a healing of memories here.)

For all that, the book ends (after brief chapters on outstanding modern Orthodox thinkers, and on etiquette for visiting an Orthodox church, which sits oddly with the rest of book) on a felicitous note by quoting a lengthy passage from Lev Gillet, who remains easily one of the most singular figures of mid-century Eastern Christianity—though McGuckin omits the crucial details of his life, which is somehow fitting insofar as Gillet deliberately tried to avoid publicity (in English some of his books are still published under the nom de plume, A Monk of the Eastern Church).

Gillet was a Catholic and, as he insisted until the end of his life, also Orthodox, which he became while remaining—he further insisted—a faithful “spiritual son” of Metropolitan Andrey Sheptytsky, primate of the UGCC until his death in 1944. Born a Roman Catholic in France, Gillet became a Studite monk under Sheptytsky and then later entered the Orthodox Church with Sheptytsky’s knowledge. For Gillet the boundaries seem to have been entirely fluid and rather unimportant, even to the point of giving and receiving sacraments. (Many details of his life and relationship with Sheptytsky are in the book Peter Galadza and I published in Paris in 2009: Unité en division: Les lettres de Lev Gillet, Un moine de l’Eglise d’Orient à Andrei Cheptytsky, 1921-1929.)

As future historians tell the next chapters of Orthodox history, picking up where McGuckin leaves off in his often superb book, Catholics can only pray the story culminates in the restoration of full communion so that the Church’s divisions will no longer continue to be such an affront to God’s majesty.

The Nashville Statement is part of an ecumenical “ecology of man”

The major theme of the Nashville Declaration, what the Catholic tradition calls an “ecological conversion,” is in complete accord with the Catechism of the Catholic […]