St. Bernadette Subirous once complained that writings about saint’s lives tend to focus on anything but the often long and slow process by which their lives of prayer and of virtue developed day by day, month by month, year by year. Records of virtues already attained do not explain how to foster their growth. Conversions from lives of sin show us how people began to live the life of grace rather than how they moved on to perfection. Such external actions as founding religious orders and missionary work have been performed by great hypocrites as well as great saints. Miraculous phenomena are experienced by only a few of us. And so, inclined as we may be to defend traditional hagiography from modern skepticism, we must recognize with St. Bernadette how works in that genre just provide a spur to spiritual commitment. Models for how to live that commitment out in all its daily details foster more growth in holiness. 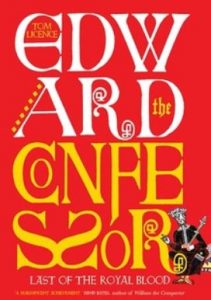 Given the paucity of reliable, pertinent primary sources and its secular approach, Tom Licence’s Edward the Confessor: Last of the Royal Blood manages to provide a remarkably solid foundation for attempts to understand sanctity. He explains how the pursuit of sanctity was combined with the exercise of political power. Edward the Confessor (c. 1003-1066) was the only king of England to have fully ruled in his own right and be recognized as a saint by the Catholic Church. (There are, for those interested, other English saint kings but one was a regional ruler before the country’s unification and the other died during a de facto regency.) This book provides facts that can give us insight into the broad contours of St. Edward’s inner life, when used in conjunction with basic principles of Catholic spirituality. The sources not only allow but even give greater attention to the topic than might be expected. The result is (explicitly) a corrective to widespread myths about that king and (implicitly) to widespread misconceptions about sanctity.

Central to misunderstandings of Edward is the belief that he was a passive, weak ruler, one who became king after years of exile thanks to the initiative of others rather than to any efforts of his own, one content to focus on his prayers while allowing “supporters” who dominated him to govern in his name, one who left his country in an uncertain state that allowed for the Norman Conquest to take place within a year of his death.

Obvious as it might seem that a ruler’s neglect of his public responsibilities is incompatible with true sanctity, the foregoing picture is, oddly enough, something like the one painted by hagiographers and critics alike. Both implicitly assume Edward must have been in some way responsible for England’s misfortunes either through sheer lack of ability (for which he should not be morally to blame) or in consequence of a flawed character. Licence shows that historical reality could hardly have been more different, that Edward was an active ruler who had aggressively pursued his accession to the English throne. He also shows that no king of England in Edward’s day—regardless of how politically astute and hard-working he may have been—could exercise anything like full control over militarily potent factions within the country, that no reign could be considered stable (let alone create lasting stability), and that even maintaining rule of the country for fourteen years required considerable talent.

During Edward the Confessor’s childhood England was racked by internal disorder and foreign invasion. Born circa 1004, he was driven into exile in 1013, his country overrun by the conquering armies of Denmark’s King Sven. Restoration of his father, King Aethelred, allowed Edward to return home for a mere three years, until his brother, by then King Edmund II, was overthrown by Sven’s son Cnut and killed soon afterward. Known as “King Cnut the Great” and one of the most effective monarchs of the Saxon era of English history, the latter’s death after a nineteen-year reign resulted in chaos comparable to that of Edward, his successor. Cnut’s empire of England, Denmark and Norway collapsed. His illegitimate son Harold seized control of England and held it for four years until, following a now common pattern, he died while preparing to defend against an invasion by his half-brother, King Harthacnut of Denmark.

Lack of alternative successors and the preference of his most powerful English supporters induced Harthacnut to allow Edward to return to England as de facto heir—the same approach Edward would later take with his own preferred successor. By that time the saint had for some years been proclaiming himself his father’s rightful heir, making tentative attempts to invade his homeland and forging a network of allies in England and France that left him the only man who had the broad base of support needed to assure a peaceful transition of power under circumstances that could easily have led to civil war or anarchy.

He was just as active in the years after he began ruling England in 1042, creating a naval fleet that reduced Viking raids against coastal regions to a fraction of their former frequency. He even strengthened his position enough to take on the powerful Earl Godwin of Wessex, who played a major role in the seizure of power by Cnut’s son Harold. After helping Harold seize power, Godwin then supported Harold’s replacement by Harthacnut, took Edward’s older brother Alfred prisoner and had his eyes pulled out (leading to his death) and, finally, secured the succession of Edward. Eventually the troublesome Godwin was forced out of England with his sons—Tostig and another Harold. The peace Godwin attained after returning at the head of an army still left his family’s position dramatically weaker than it has been for decades, particularly after his own death in 1053.

Seemingly at the moment of victory, however, a number of the leading men upon whom Edward had relied as counterweights went to their graves one right after another. This made maintaining order and security on the borders of Wales and Scotland difficult. It required depending upon Harold’s power base in the south of England and Tostig’s willingness to act as the king’s agent in the north. Both men could easily ally with the Scots and Welsh if not indulged.  However, as long as the king allowed them to hold high office, cooperation best secured their own power. Ironically enough, though, it was conflict between the brothers that brought about Edward’s demise. When an alliance between Harold and leading figures from northern England forced Edward to acquiesce in Tostig’s exile, the king suffered a series of strokes that first destroyed his sanity and then killed him.

As England’s monarchy was then elective, Harold was quick to establish himself in power, Edward not having legally established a successor. This is often cited as evidence of weakness but open to an alternative interpretation. Edward had recognized an “aetheling” (a royal prince eligible for election as king) his great-nephew Edgar, grandson of King Edmund II and in every other way informally treated him as heir. But with Edgar too young to have a powerful following in his own right, his official establishment as successor could have provoked Harold to a potentially successful all-or-nothing rebellion. Lack of a legally established succession could allow Edward to wait until Edgar was in a stronger position, Harold being less likely to take risks when he could still achieve his end through legal means. Edgar, still not more than in his mid-teens, was even duly elected king following Edward’s death before his position immediately was usurped by Harold.

Unfortunately, however, there is one point on which it is necessary to express reservations about the book. Though Licence provides a generally solid and much needed revisionist account, it necessarily includes a good deal of the speculation inevitable in any biography and particularly needed in those of figures from the eleventh century. For the most part Licence’s are plausible but do, in some cases, fail to accord with what we know of his subject’s sanctity.

Scots College in Rome to change location in the city

Rome, Italy, Dec 7, 2020 / 09:38 am (CNA).- The Scottish seminary in Rome is looking to relocate closer to the city center next year, after determining that needed updates to the current building will not be cost-effective.

The ABC of Liberal Failure

Patrick J. Deneen’s much-discussed book rightly points out that liberalism comes down to an individualism and subjectivism that divorce us from nature and make each of […]

Unlocking the mystery of relics

There have been some reports in the news lately about relics arriving on U.S. soil. On April 3, a relic of Blessed Carlos Acutis, the first millennial to be beatified, arrived in New York. The […]