Why Liberalism Failed, by Patrick Deneen, presents a fundamental critique of liberal thought and practice. The widespread interest it has aroused shows that current events have made that critique of interest to many people.

Like others who share his general perspective (including myself), Deneen says that liberalism—the attempt to base politics on individual choice—is fundamentally flawed, because it is based on a deficient understanding of man and society. The result is that its triumph, which displays ever more clearly its inadequacy as a governing principle, becomes its failure. 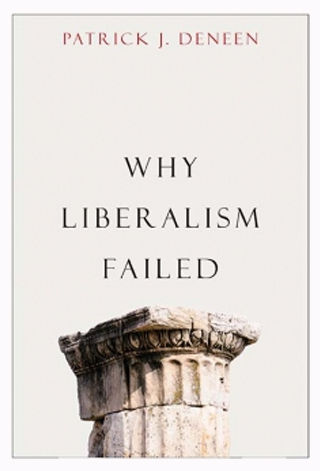 The problem with liberalism, in Deneen’s view, comes down to an individualism and subjectivism that divorce us from nature and make each of us the measure of all things. The Supreme Court put its authority squarely behind that tendency in the famous Mystery Passage from Casey v. Planned Parenthood, in which it tells us that “at the heart of liberty is the right to define one’s own concept of existence, of meaning, of the universe, and of the mystery of human life.”

On such a view human nature and natural human goods vanish in favor of the arbitrary choices of individuals. Time, place, and culture become irrelevant to our concerns. The past and future can look after themselves, and thought and action are liberated from local connections. Ties that bind—family, religion, inherited community—become forms of oppression, and if a man says he’s a woman he’s a woman. Who’s entitled to say otherwise?

The only institutions that remain legitimate are market and bureaucracy, understood as rational arrangements for registering, reconciling, and promoting individual choice. These institutions absorb all social functions. Public life all but disappears, and politics reduces to jockeying for relative position by “progressives” who favor bureaucracy and “conservatives” who prefer markets. On fundamental issues, though, the two are closely allied.

The weakening of the ties and understandings that normally order everyday life causes private life to fall into chaos, except to the extent career gives it form and direction. So it becomes either a round of dissipation or a treadmill. If that’s freedom, who wants it?

Similar problems apply to the other promises of liberalism. As Deneen puts it:

But what to do?

Conservatives who point out that earlier more moderate forms of liberalism—the liberalism of the American Founding, for example—were more workable are right but not helpful. It’s impossible to reverse the progression that led to where we are, because each step followed from principles already accepted. Nor can a more traditional form of society be retrieved by traditionalists seizing state power, since the bureaucratic state is necessarily rationalizing and antitraditional.

Deneen’s solution appears to be a stripped-down version of Rod Dreher’s Benedict Option. In his version people decide to create rooted community because they recognize it as a necessary human good, and do so by habituating themselves to the practices that make community rather than by relying on a particular view (such as the Christian view Dreher proposes) of the nature of man and the specific goods to be attained.

The solution is surprising. Can you really acquire roots by wanting them and acting as if you had them? Deneen otherwise takes theory very seriously. He treats liberal political philosophy as the force that determines all aspects of the modern world, from the looseness of social ties to basic aspects of modern science and technology. His conclusion though is that we’ve had too much theory, and he’d rather we did without it for a while.

The conclusion is unrealistic. Deneen may exaggerate the influence of liberal thought, as opposed to technological, economic, and institutional factors, but he’s right that that fundamental understandings are enormously important. But if that’s so, then we won’t transform attitudes and practices that follow from bad understandings without better understandings. You can’t beat something with nothing.

Also, it’s not just political theory, Deneen’s concern, that affects social life. Moral, cultural, and especially religious beliefs have their own influence. The author is a serious Catholic teaching at what is considered America’s flagship Catholic university, and he knows that “cult” is basic to “culture.” Even so, he refers to such considerations only in passing.

Possibly he has to simplify to make basic points readily comprehensible to a large audience. Or it may be that he wants to be taken seriously in mainstream circles who don’t want to talk about ultimate matters, especially God. Whatever the reason, there are essential issues that need more development than he provides.

The modern political outlook springs from more basic aspects of the modern outlook: what’s real, how we know things, what’s worth aiming at. It answers those questions by effectively abolishing transcendence and therefore God. All we can know, it tells us, is what we experience, notably pleasure and pain. Increasing the former and decreasing the latter therefore become our rational goal, knowledge becomes a matter of finding ways to achieve that goal, and social life becomes a system of cooperation to the same end.

It’s a degraded understanding of the world, but it pervades public life. To escape from it, it is necessary to stop it at the beginning by regaining a sense of transcendence. As a practical matter that means bringing God into the picture. We won’t get a better society by keeping politics and social organization at the center of our concerns and continuing to ignore what is most important.

Deneen also downplays the difficulties a nonliberal community would encounter surviving in an increasingly intolerant liberal order. He notes that

demands will undoubtedly be made for comprehensive assurances that inequalities and injustices arising from racial, sexual, and ethnic prejudice be preemptively forestalled and that local autocracies or theocracies be legally prevented.

But he doesn’t discuss what that would mean.

It means serious trouble. The emphasis on the natural family necessary for the kind of communities he wants means sexual complementarity rather than radical egalitarianism. The kind of complex, local, and evolved culture he presents as his ideal sounds very much like an intact ethnic culture. And his proposed local communities would undoubtedly turn out to have a religious basis. So his new communities would, from the ever-more-demanding liberal point of view, skew racist, sexist, homophobic, transphobic, theocratic, and what not else. Even assuming people are allowed to choose that sort of thing for themselves, why would they be allowed to subject children to it?

Deneen offers three possibilities for the future: a continuation of the current regime, which would involve a stubbornly liberal ruling class struggling to force an ever more chaotic and recalcitrant populace to comply with its demands; a new Donald Trump who actually resembles the Donald Trump of leftist nightmares and who makes himself dictator; or a more humane world based on the true diversity of rooted local communities.

All three seem improbable, the first because fanatical ruling elites regularly abandon their fanaticism and become lazy, corrupt, and self-seeking; the second because fine-grained social disorder and growing ethnic and religious diversity is likely to deprive authoritarian nationalists of the crude social solidarity they rely on; and the third because soft landings are extremely rare in history.

What seems more likely is a degraded combination of all three: a public order that does very little to advance its stated liberal ideals and largely functions as a kleptocracy; a greater role for the military, as the public institution most likely to retain some effectiveness; and the growth of informal criminal, kinship, and ethnic networks that carry on more and more social functions and eventually take on many features of Deneen’s and Dreher’s projected small local communities.

In other words, we’re likely to end up with something like an officially liberal version of traditional Middle Eastern and Central Asian society—which is, after all, the most obvious model for how a radically diverse and cosmopolitan society is going to arrange itself.

About James Kalb 132 Articles
James Kalb is a lawyer, independent scholar, and Catholic convert who lives in Brooklyn, New York. He is the author of The Tyranny of Liberalism(ISI Books, 2008) and, most recently, Against Inclusiveness: How the Diversity Regime is Flattening America and the West and What to Do About It (Angelico Press, 2013).

Editor’s note: This is the second of a series of reviews and essays—positive, critical, and mixed—of Rod Dreher’s The Benedict Option (Sentinel, 2017). Read the first essay here. With the publication of La Primauté du spirituel, […]

Pray tell, who is the real Donald Trump?