Sister Constance Veit, communications director for Little Sisters of the Poor, said 11 people have died from COVID-19 at Jeanne Jugan Residence in Newark, Delaware, since March 29.

According to The Dialog, the newspaper of the Diocese of Wilmington, there are more than 60 people living at the retirement residence, including 40 in the nursing unit.

However, Veit said it’s been several days since the most recent death occurred, and other patients are beginning to recover.

“We have had 11 resident deaths related to Covid-19, but none for more than two days now, so we feel we may have turned a corner,” she said on Sunday.

“I was going around to wish the residents happy Easter and found a few of them who have been sick looking quite good,” she said, according to The Dialog.

COVID-19 is particularly dangerous for elderly people and those with pre-existing medical conditions. The Centers for Disease Control and Prevention has said that 80% of coronavirus deaths in the U.S. have occurred among people ages 65 years and older.

All of those who died from the virus at the Jeanne Jugan Residence suffered from an underlying condition, The Dialog reported.

Sister Veit reflected on the resurrection of Christ on Easter Sunday, and the hope it provides amid grief.

“Today, on Easter Sunday, as I reflect on the loss of … residents, I realize that faith in the resurrection of Jesus is the only thing that can make sense out of this situation,” she said.

She added that while this did not diminish the loss experienced by those whose loved ones had died, she hopes they will find consolation in their belief in heaven.

Viet also expressed gratitude for those in the community who have donated various supplies to the residence.

“And for these we are so very grateful. I think we are OK for everything right now,” she said. “We want to thank everyone in the local community for being so good to us and our residents.”

Coloradans gather final round of signatures for late-term abortion ban 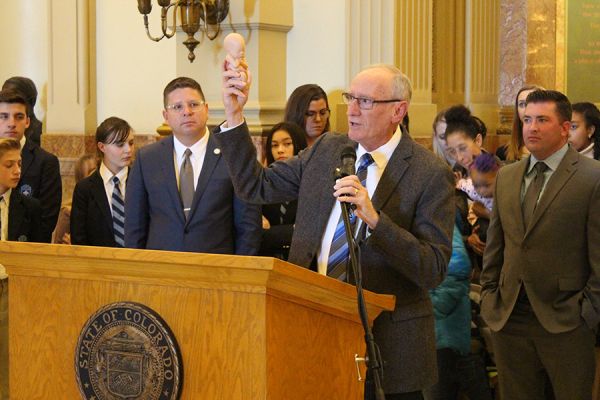 Denver, Colo., May 15, 2020 / 11:01 am (CNA).- A coalition of volunteers in Colorado hopes to gather enough signatures in the next two weeks on a petition to put a late-term abortion ban on the November ballot – an effort complicated by restrictions related to the coronavirus pandemic.

The Coalition for Women and Children, a Christian group led by Giuliana Day, filed the petition during July 2019 with the Colorado Secretary of State. The initiative would ban abortions in the state after 22 weeks, with an exception to save the life of the mother.

Colorado remains one of the only states where late-term abortion is not, under law, explicitly protected or restricted. As a result, abortions can take place up until birth. Notably, the Boulder Abortion Clinic is one of just a handful of clinics in the U.S. that publicly accept patients seeking late-term abortions from anywhere in the world.

The organization of volunteers supporting the petition – known as Due Date Too Late – was originally tasked with collecting nearly 125,000 signatures within a six-month time limit in order to have the question appear on the ballot in November 2020.

The original deadline to submit the signatures was March 4. When the Colorado Secretary of State’s office counted the 137,624 signatures that the group submitted, it ruled only 114,647 of them valid— about 10,000 too few for the initiative to make it onto the ballot.

Now, the volunteers have two weeks, what is known as a “cure period,” to make up the signature deficit by gathering new signatures and encouraging those whose signatures were ruled invalid to re-sign.

The Archdiocese of Denver is encouraging Catholics to sign the petition.

“Our efforts are really focused on getting new signatures, and then whatever can be ruled valid that was previously invalid is going to be helpful, but we don’t want to count on that. So we want to make sure we get the new ones,” Deacon Geoff Bennett, vice president of parish and community relations for Catholic Charities of Denver, told CNA.

The cure period was originally set to begin April 27, but a district court judge granted Due Date Too Late a delay until May 15 because of the continued restrictions related to the coronavirus.

Governor Jared Polis’ statewide stay-at-home order ended April 26, but the state remains under a “safer-at-home” policy, whereby all are encouraged to stay at home and avoid unnecessary interactions whenever possible, and to comply with social distancing requirements.

Beginning May 15, there will be approximately 100 signing locations throughout the state staffed by over 400 volunteers from Due Date Too Late. Many of the original signers of the petition were Catholic or Evangelical Christian, and as a result most of the signing locations are places of worship.

Because Colorado is a large state and coronavirus restrictions and recommendations vary, the organizers are asking all signature collectors to check on the most current social distancing guidelines with their county, rather than issuing their own guidelines.

The organizers have, however, offered suggestions to volunteers such as offering a new, clean pen to every signer, as well as offering hand sanitizer to each signer.

All public and private gatherings remain limited, by the governor’s order, to no more than ten people.

The organizers used geomapping based on the data they collected about the original signers of the petition to determine the best locations to send volunteers to collect signatures.

The group will be collecting signatures through May 28, since the signatures need to be submitted by May 29. The plan is to collect about 15,000 signatures in the next two weeks.

In an April 24 statement, Due Date Too Late stated that a sample of 40,000 signees showed “broad-based, bipartisan support,” with 40% of those sampled members of the Democratic Party or unaffiliated.

Bennett encouraged anyone who has already signed the petition to check whether their signature was accepted; the Secretary of State rejected many of the signatures, he said, because the signers’ information did not exactly match their voter registration.

There are other potential issues other than voter registration mismatches. For example, the petition circulator may have filled out their affidavit incorrectly, which in some cases invalidated entire packets of signatures.

While signers whose signatures were previously ruled invalid will have the opportunity to re-sign, new signatures are preferable, organizers have told CNA.

Lauren Castillo, director of church relations for Students for Life of America and spokesperson for Due Date Too Late, told the press in February that in Colorado in 2019, at least 323 abortions were performed on babies after 21 weeks gestation.

“The vast majority of these late term abortions are done on babies without adverse late-term fetal diagnoses, or serious health risks in the pregnancy, and without life threatening circumstances for the mother,” Castillo said.

“They’re done electively, and are not necessary. And in an emergency situation that would be life threatening to the mother, a c-section is a far safe procedure than a late-term abortion.”

Bennett noted that abortion-rights groups in Colorado touted the fact that for a time during the pandemic, many women from other states were traveling to Colorado to take advantage of the state’s permissive abortion laws.

Abortion clinics in states like Colorado, Nevada, and New Mexico, which did not introduce any pandemic-related restrictions on abortion, saw increases in patients traveling from other states, such as Texas, to undergo the procedure.

“We want to encourage people to make a stand for life, especially in the environment that we’re in [the pandemic] where we’re so concerned about life,” Bennett said.

Colorado was the first state in the nation to decriminalize abortion. The initial legislation, signed into law April 25, 1967, allowed abortion in certain limited cases: rape, incest, or a prediction of permanent mental or physical disability of either the child or mother. Six years later, the U.S. Supreme Court’s ruling in Roe v. Wade declared abortion a constitutional right nationwide.