Two words are central to the story told in an important new biography of Father Theodore Hesburgh, C.S.C. The words are complexity and assimilation. Complexity marked his long, distinguished career that included not only the presidency of Notre Dame but notable public service. Assimilation—integration into the mainstream secular culture—was a fundamental principle of both. 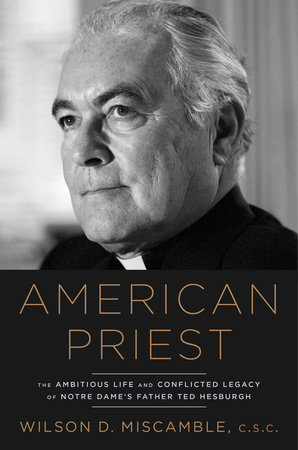 In his Hesburgh biography American Priest, Notre Dame historian Father Wilson Miscamble, C.S.C., writes that Father Hesburgh “poured out his energies”—which were prodigious—in service to God, country, and the university he loved. Yet the results were mixed:

His desire for greater independence from his religious order and from the institutional Church certainly shaped how he led the university. Ironically, however, he developed a virtual dependence on the regard and esteem of the liberal establishment in America.

Born in 1917 in Syracuse, N.Y., Theodore Hesburgh entered the Congregation of the Holy Cross in 1934 and was ordained in 1943. Two years later he was assigned to teach theology at Notre Dame. In 1949 he was named executive vice president of the university and in 1952, at the relatively young age of 35, its president. He would occupy that position for 35 years and continued to live there, an iconic figure, until his death four years ago at the age of 97.

More than anyone, Father Hesburgh was responsible for transforming Notre Dame from a school known largely for its football team into a wealthy, respected university regarded as one of America’s elite institutions of higher education. But the change had a price. For it was he who engineered transfer of ownership of the university from the Holy Cross order to the school’s board of trustees, and he who was largely responsible for the Land O’Lakes statement of 1967in which representatives of several of America’s leading Catholic universities declared independence from the teaching authority of the Church.

The talented priest held important positions in secular settings, especially as member of the board of the Rockefeller Foundation, including its executive committee. How, someone might ask, could a Catholic priest be part of the decision-making mechanism of a foundation actively supporting contraception, sterilization, and abortion? The Hesburgh solution was to abstain from voting on these matters. As for public service, here his membership on the U.S Civil Rights Commission, including chairing it from 1969 to 1972, stands out. The civil rights movement was in its heyday then, and the commission was in the thick of it.

Despite the activism, priesthood was central in his life. He made it a point to celebrate Mass daily if possible and was famously generous with his time in counseling and encouraging students and others.

And always there was the powerful impulse toward cultural assimilation. The “desire to be part of the elite circles of power and influence,” Father Miscamble writes, “colored how he led Notre Dame as well as what causes he pursued.” His position on abortion is a case in point. He regarded it as wrong and opposed it, but he also opposed Notre Dame’s becoming identified with the prolife movement lest its standing with the secular elite suffer.

Kenneth Woodward, Notre Dame alumnus and former religion editor of Newsweek, calls American Priest a “hatchet job” but it’s not. The author repeatedly shows Theodore Hesburgh as a high-minded educator, public servant, and priest who did much good. That he also shows the problematic side of a man for whom cultural assimilation sometimes mattered more than Catholic identity is a matter of simple honesty.

About Russell Shaw 267 Articles
Russell Shaw was secretary for public affairs of the National Conference of Catholic Bishops/United States Catholic Conference from 1969 to 1987. He is the author of 20 books, including Nothing to Hide, American Church: The Remarkable Rise, Meteoric Fall, and Uncertain Future of Catholicism in America, Eight Popes and the Crisis of Modernity, and, most recently, The Life of Jesus Christ (Our Sunday Visitor, 2021).

Former Congressman Dan Lipinski: we must be “Catholic first”

Denver Newsroom, Nov 13, 2021 / 10:41 am (CNA).
Former Congressman Dan Lipinski has urged faithful to be “Catholics first” in the public square, putting their faith above an excessive loyalty to party, persona… […]

Washington D.C., Aug 6, 2021 / 15:01 pm (CNA).
A new center at the University of Notre Dame seeks to bring Catholic social teaching into current-day political and constitutional debates.In May, the un… […]