Several years ago, responding to something that I’d written about secrecy in the Church, an elderly, retired bishop (now deceased) sent me a letter that could have been written today about the scandal swirling around former Cardinal Theodore McCarrick.

Here in part is what he said:

As a priest formed in the cauldron of the Second Vatican Council, I don’t have any reluctance to proclaim truth, even in circumstances that seem difficult. More scandals come from attempting to control access to truth than ever came from honesty and openness.

The very worst scandal of our times in the Church has been the sexual predation of some priests. The attempt to keep such matters secret on grounds of protecting reputations through the years simply allowed the evil to fester and grow. And when the dam of secrecy finally broke—as it always will—the whole Church suffered for its lack of candor.

Of course the bishop wasn’t thinking of Archbishop McCarrick when he wrote that, nor did he have in mind the torrent of allegations and accusations lately spilling out in Pennsylvania. But his words nevertheless can stand as a painfully accurate summary of the harm done by the practice of secrecy working hand-in-glove with clericalism to the objects of the ex-cardinal’s “predation” and to the victims of abuse by clerics generally. 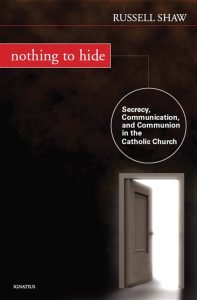 Numerous bishops, including Cardinal Daniel DiNardo, president of the U.S. bishops’ conference, have promised that we’ll see a serious investigation to dig out the facts in the McCarrick affair. One of the few encouraging aspects of this otherwise deeply discouraging episode is the fact that the USCCB president and many of the other bishops who’ve spoken out about it give every indication of being genuinely shocked and angry about what happened. Good for them. Shock and anger are healthy first steps toward remedial action.

If the investigation that bishops have demanded and promised is carried out rigorously, with direct participation by competent lay people as well as clerics and religious, and if its findings are publicized fully and without pulling any punches or sparing any reputations, it could be a highly useful exercise by providing us with the facts we need in order to design and implement the reforms that are needed to prevent anything like this from ever happening again.

Pending that, at least the general outlines of what happened in the McCarrick case are already reasonably clear. Here was a classic instance of how secrecy and clericalism work in tandem to produce the kind of disaster of which my friend the elderly bishop spoke—and which I analyze in my book Nothing To Hide: Secrecy, Communication, and Communion in the Catholic Church (Ignatius 2008).

To be sure, secrecy is sometimes necessary and good in the religious sphere as it is in other areas of life. In the Church, the imperative of secrecy is especially clear in regard to the seal of confession—the grave obligation of absolute confidentiality on the part of priests concerning anything disclosed to them in the sacrament of penance. (The ‘seal’ is currently under serious attack in several places in Australia—which is still another of the ugly results of clergy sex abuse for which the Church continues to pay a terribly high price.)

But secrecy in the Church is often not necessary and not good—it is an abuse. And the abuse of secrecy was operative in regard to two distinct aspects of what occurred in the McCarrick case.

First, secrecy veiled the gross misconduct of a high-ranking churchman who over a number of years imposed outrageously upon an unknown number of boys and young men, many of them seminarians and priests.

Second, secrecy cloaked the process by which this same offending churchman rose through the ranks of the clerical hierarchy—from secretary to a cardinal all the way to becoming a cardinal himself—even though it now seems that many of the high-ranking Church officials who were  involved in aiding and approving his ascent had heard reports of his scandalous behavior.

How could such things happen? Secrecy in combination with clerical elitism holds the key to answering that.

Granted, in the McCarrick case the erring individual was something more than just one more abusive priest. But the same two agents—clerical elitism and the abuse of secrecy—were involved here as they are in cases of clergy sex abuse generally.

As I explain in Nothing To Hide, clerical elitism—the notion that the clergy are a privileged caste, with special privileges and exemptions not granted to the rest of us—did not cause sex abuse, nor did sex abuse cause clerical elitism. But the link between the two things is certainly very real. Simply put, the attitudes and behavior patterns of clerical elitism came into play time and again when erring priests’ superiors, learning that the priests were guilty of deviant sexual behavior, either with minors or adults, simply looked the other way or else swept the mess under the rug.

“Bishops who acted like this,” I write, “were acting reasonably by the standards of the clericalist culture to which they belonged. Wishing to be good servants of the Church, they served the clericalist system. And in the end this system of concealment and illusion betrayed them and the rest of the Church.”

The cover-up—concealing what had happened—was a typical part of the response. And although the Church in the United States has made considerable progress in eliminating this coverup mentality in the last 15 years, we are still very far from rooting it out it entirely.

As recent disclosures of sex abuse from the worlds of entertainment, media, and politics illustrate, the Church is hardly alone in having such problems. Indeed, what we are seeing now is a pattern of deeply flawed reaction in Church circles to temptations resembling those that threaten to corrupt every profession and trade.

These are tendencies to distort and pervert the solidarity and mutual loyalty that rightly bond members of a particular profession or group (ethical doctors covering up for incompetent ones, honest attorneys closing their eyes to the failing of dishonest lawyers), and a related failure to practice accountability in regard to professional responsibility. Secrecy obviously lends powerful support to both.

In the Church as everywhere else, the solution also seems clear. Bishops, priests, and all others in positions of pastoral responsibility need to take the requirements of openness and honesty much more seriously than many of them have been accustomed to do up to now. This is fundamental if the exercise of pastoral authority is not to degenerate into a kind of paternalistic authoritarianism with a smiling “pastoral” face.

The first step now is the kind of honest, searching investigation that Cardinal DiNardo and others have promised, with lay people present as full partners in its design and implementation. The credibility of the bishops themselves requires no less.

Beyond that, lay women and men should also be involved to a far greater extent than is now the case in the process by which bishops are appointed and promoted. As matters stand, lay people can be consulted, but this can be done only individually and in strict secrecy. By way of reform, commissions or boards of consultation made up of competent laity should be established for this purpose. And while confidentiality should still be part of it, serious thought should be given to meaningful ways of opening up the process to accountability to the Church at large.

Would this require changing canon law? Very likely it would. But canon law is not carved in stone, and when a time comes for making changes, it can be changed. This clearly is such a time.

The values at stake here are profoundly serious ones that pertain to the very nature of the Church as a communion. I concluded Nothing To Hide with a passage that I think still sums it all up reasonably well:

Communication is difficult, even in the Church, but the consequences of not communicating, to say nothing of lies, equivocation, self-serving and manipulative secrecy, non-accountability—the sad litany of communication faults—are worse: loss of trust, anger, alienation, unraveling of lived communion. Failures of communication must be overcome, not multiplied by concealment and dissimulation.

“In this way we express the reality of the Church, which at one and the same time is the spotless bride of Christ and a band of sinners. The Church’s failings are our failings. When we speak of reforming the Church by honest, open communication and accountability, we are speaking of reforming ourselves.

About Russell Shaw 251 Articles
Russell Shaw was secretary for public affairs of the National Conference of Catholic Bishops/United States Catholic Conference from 1969 to 1987. He is the author of 20 books, including Nothing to Hide, American Church: The Remarkable Rise, Meteoric Fall, and Uncertain Future of Catholicism in America, Eight Popes and the Crisis of Modernity, and, most recently, The Life of Jesus Christ (Our Sunday Visitor, 2021).

The role of clericalism in the current crisis

The Archbishop of Philadelphia, Charles J. Chaput, recently delivered remarks that focused on the leadership crisis in the Church. The churchman — a leader widely respected and admired for good reason — was right in […]

After a month out of the country, working in Rome at Synod-2018 and helping mark the 40th anniversary of John Paul II’s election at events in Brussels and Warsaw, I came home to find Catholic […]