A young Virginian well versed in folk, blues, and country music, but recognizing Catholic “prayers and melodies just from [his] scant / neighborliness with the Episcopal Church / as a child,” for some reason begins to visit the Trappist monasteries of the American South. To Our Lady of Angels, Holy Cross Abbey, Mepkin Abbey, Our Lady of Gethsemani, and the Monastery of the Holy Spirit he goes and what he finds there becomes the occasion of this long essay in verse. 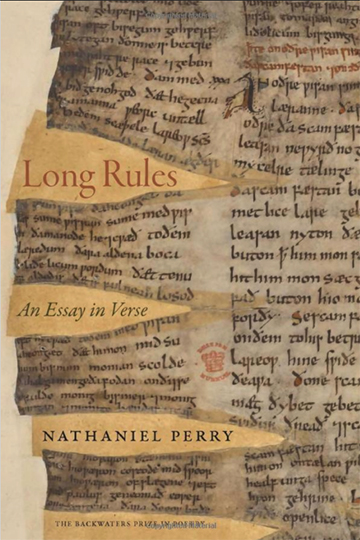 What was Nathaniel Perry after in these pilgrimages? Why, all the while, is he reading the letters of the Capadocian father, Saint Basil the Great? Basil is best remembered in the West for his defense of the Holy Trinity, and in the Christian East for his “Long Rules” which govern eastern monastic life as the rule of Saint Benedict governs the western.

Early in these pages, Perry himself does not seem to know. At Holy Cross, he stops by the gift shop to buy “some honey and a handful of books.” He chats “with the brother running the shop,” and we are treated to that brother’s frustration, when Perry asks about the much more famous monastery at Gethsemani, where for some decades lived that most celebrated of American monks and authors, Thomas Merton. Perry writes, “he was sardonic and grumpy when I asked / If he’s been to Gethsemani.” He “said he didn’t want / to go, had heard it was too hot in Kentucky. / He rang up my books on an iPad . . .”

The curiosity of the ingénue and tourist gives way soon enough, as if by the badgering of Saint Basil’s authorial voice (which Perry seems to find at once off-putting and attractive for its concern with true doctrine, which in a sour moment he dismisses as the “hair-splitting of doctrinal / carping”), to the fundamental question that monastic life poses for all human beings.

Saint Basil’s writings on the Trinity help reveal to us that, though our God is one god, he is three divine persons. At the heart of the “solitude” of God lies a perfect community, a perfect society, of love. Monastic life, which began with hermits seeking communion with the one God in the solitude of the wilderness, gradually was overtaken by the cenobitic tradition, which affirmed that God, this divine communion of persons, was best sought in a community of prayer. The Trinity provides the archetype for the contemplative life, giving principle and form to what would be elaborated and ordered by the great rules of the early authorities of monasticism. The unity of creatures in prayer is an image of the unity of the persons of God.

Perry does not pretend to accept the mystery of the Trinity that Saint Basil stoutly defended nor does he pretend to understand the basis of monastic life. He does not deny it either. Rather, he is simply drawn to it and tries to figure it out. The six sections of the poem, each written in a loose iambic pentameter verse, mostly blank but occasionally rising into “fits” of rhyme, allow us to follow along as his flat-footed curiosity matures and takes on urgency, power, and even wisdom. The whole really is an essay in the old sense, an attempt to understand the meaning of solitude and community for monastic orders, for God, and also for the uncertain pilgrim who is its author.

Perhaps because of his own uncertainty, Perry begins from the assumption of our solitude. At Our Lady of Angels he writes that Basil knew “the self is natively / alone, but the body needs neighbors to shiver through the winter with and bend down next to in the fields.” Speaking in his own voice and back at his own domestic monastery, his home in Cumberland, Virginia, Perry tells us that

At the level of what I know empirically,
there’s sadness in every story, every dawn destroyed
by time, ever man and woman framed by skin
and bone and therefore ever alone.

“Empirically,” that is to say, what is known according to the senses, is that our body’s limit is also the “border” that separates us from others. That same body’s need drives us together to “shiver” and pray. But this individualism and existential loneliness is not all that may be said, as soon makes clear.

Bearing witness to the monastic life and reading Saint Basil’s letters leads Perry to discover a few things that call into question our condition as one of solitude. The saint was the founder of a monastic community but, in 370 AD, was also called from there to the community of civic life, as Bishop of Caesarea. In both of these roles, Basil gives away the self. Further, in his eyes,

Groups of holy people,
groups of people whole, for him, are something
like the Trinity—mysterious unity,
strange and meaningful separations.

We remain our individual selves and yet also become a communal self. Perry on several occasions compares Basil’s monastic rules to music: what seems restrictive, confining, a mere heteronomous imposition on the self, in fact joins notes together to make a song and “makes community of whatever it touches.” That is not all. Letter writing such as Basil’s implies the reality of communion achieved and Basil’s preference for speaking face-to-face affirms the yearning he feels for communion can be achieved in the presence of another.

Not only do our selves compose community, but community composes the self, stretching it and shaping it. For, “a self is only a self in context,” it is defined by what stands outside of it. Basil “makes sense of himself to himself / when explaining himself to others.” Perry’s abiding question, so he eventually concludes, is “who are we to care for other people?” And the answer is that through the community of prayer in the monastery and the communion with nature achieved by what Simone Weil called “attention” we can stretch out from our material solitude and enter into the spiritual solitude of God.

He reaches this conclusion through what I would dare to call a counterintuitive interpretation of Basil’s doctrine of the Trinity:

Basil’s insistence on the Trinity
as equal iterations of the same god,
and not three different things, suggests to me
that at the heart of the human community,
at the level of what we know empirically,
is a towering singular aloneness—that god
is the first example of solitude, but one
that only makes sense when embraced and sung and adorned
by the community of people who see themselves
in some fundamental way as always alone

The pagan, neo-Platonist philosophy contemporary to Saint Basil certainly could have approved such an idea. Writing a century before Saint Basil, for example, Plotinus concludes his Enneads by proposing that the contemplative life, which is the highest and rarest ideal of human life, is a flight of “the alone [the soul] into the alone [the eternal One].” But the revelation of the Trinity permanently overthrows such an idea. We learn that being is fundamentally identical with love, such that, in the perfect unity of the being of God, there is, as I said above, a perfect community of love among three divine persons.

What Perry calls the “empirical” view of persons as solitary individuals is only true “empirically,” that is to say, according to appearances. In reality, community is fundamental to the unity of God, and to reality as such. The human experience of loneliness or solitude is not fundamental but rather simply where we begin on account of our fallen condition. We were made by the love of the divine communion of the Trinity and we are destined by that love to return to it, to enter into that communion as children of God and members of the body of Christ. Perhaps the appearance of monastic practices misled Perry; perhaps he found something in the pages of Saint Basil still redolent of Plotinus and neo-Platonism; perhaps he’s just a sojourner trying to figure out what community is and manages to get some things right and some things wrong.

The previous best known visit of a residually Anglican or Episcopal poet to a Catholic monastery was that of Matthew Arnold, who visited the Carthusians of the Grand Chartreuse, while on his honeymoon in 1851. Arnold declares himself too well educated to embrace the pious superstitions of the monks, but he concedes their moral superiority in leaving behind, but praying for, a world of vain ambitions and “haughty scorn.” The encounter produced Arnold’s best single stanza of poetry:

Wandering between two worlds, one dead,
The other powerless to be born,
With nowhere yet to rest my head,
Like these, on earth I wait forlorn.
Their faith, my tears, the world deride—
I come to shed them at their side.

And yet, even in these lines that seem such a sincere and stricken epitome of Christendom in decline and its children still too uncertain to know where to look for regeneration, the most conspicuous feature is Arnold’s bigoted condescension toward the monks. The monks are still at the Grand Chartreuse, of course, though Arnold has long since gone to his grave and so, by and large, has his reputation as a poet. All of which makes Perry’s humility and openness a welcome and edifying contrast.

Overall, this meditation, essay, pilgrimage, and tour of contemporary Trappist monasteries is an important addition to contemporary poetry. The seriousness and flirtations with depth that we find here are exceptional in an age whose art, such as it is, tends to view political righteousness rather than spiritual fulfillment as the sole plausible end of art.

Further, Perry’s efforts at blank verse, though far, far too loose and uneven to give the reader a real sense of the elegance of measured speech that is poetry’s essential quality, at least gestures toward a vision of poetry that is at once intellectually cogent and formally well made. I wish it were more so. Just as Perry’s meditations veer and digress away from commitment and belief almost constantly, his use of meter and rhetoric reveal a discomfort with poetic form and a suspicion of mellifluous and refined language.

And yet, there are moments of almost rhapsodic concentration, where his spare use of rhyme suddenly grows dense, his meter tight, his rhythm grinding, such as this one:

In heron-air, in human prayer,
in turnip-tang and flair, in river-where,
in Basil’s healthless graceful word-made care,
in notes the banjo and the guitar share,
the song shimmers like a face, or the face
of an idea, at least, of what we mean
by communion

And then there are the final lines of the poem, which show the verse essay has really gotten somewhere, but which I will not quote here in hopes of inciting the reader to go with Perry and Saint Basil into these pages and in search of communion.

About James Matthew Wilson 21 Articles
James Matthew Wilson is the Cullen Foundation Chair in English Literature and Founding Director of the MFA program in Creative Writing at the University of Saint Thomas, Houston. His most recent book is I Believe in One God: Praying the Nicene Creed (Catholic Truth Society, 2022).