In the summer before the Second Vatican Council opened, Pope John XXIII met with Cardinal Léon-Joseph Suenens in the papal residence at Castel Gandolfo. “I know what my part in the Council will be,” the Pope told the Belgian archbishop. “It will be to suffer.” Pope John was prescient, and not just because the Council’s opening weeks would prove contentious; shortly before Vatican II began its work, the Pope was diagnosed with the painful cancer that would kill him in less than a year.

When Paul Mankowski, finishing a brilliant undergraduate career at the University of Chicago and anticipating graduate studies and a fulfilling married life, got unexpectedly hammered by a call from Higher Authority to abandon his plans and enter the Society of Jesus, I don’t think he imagined that his role in the Jesuits would be to suffer: in, because of, and for the community in which he would spend 44 years as novice, priest, scholar, and sign of contradiction.

The man who became Father Mankowski, SJ, was very tough, and as a former boxer, he knew something about absorbing pain. But he wasn’t a masochist, and he didn’t deliberately seek out suffering. It came to him, and he bore it, for the same reason John XXIII accepted his suffering: it was for the sake of a greater good and a greater glory – the glory of God. 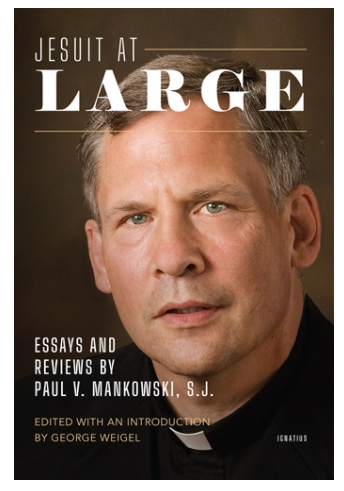 Father Mankowski’s death last September was another unanticipated awfulness in a year of hard blows. We had been speaking by phone and volleying by e-mail with the regularity that marked our friendship for three decades; neither I nor any of his other friends anticipated that, when 66-year old Paul Mankowski got into a dentist’s chair on September 3, 2020, he would be felled by a burst cerebral aneurysm.

A few days later, still not quite able to grasp that he had been taken so abruptly, a thought came to me: some of Father Mankowski’s writing should be anthologized so that others could get to know this exhilarating author, his keen insight, and his equally keen wit.

My friends at Ignatius Press agreed. And thanks to their good work, Jesuit at Large: Essays and Reviews by Paul V. Mankowski, SJ, has just been published with my biographical introduction.

Several of the collected essays take us deep into the liturgy wars that have, unfortunately, intensified once again in the Church. A trained classicist who understood just how awful some of the early vernacular translations of the Mass texts were, Paul Mankowski celebrated both forms of the Roman Rite with reverence and joy. He could also make pellucidly clear why the celebrating priest was the servant of the liturgy, not its master — and why do-it-yourself liturgy was an offense against God and an obnoxious, narcissistic exercise in clericalism.

Perhaps only Paul Mankowski could explain how dissent from Humanae Vitae and its teaching on the morally appropriate means of regulating fertility within marriage had corrupted the consecrated religious life of those who did not marry. And no one could skewer the inanities of the contemporary academic guild as well as Father Mankowski. One of the essays in Jesuit at Large, “What I Saw at the American Academy of Religion,” is both side-splittingly funny and a prescient dissection of woke intellectual life today, written decades before “woke” became part of the national vocabulary.

As a book reviewer, Paul Mankowski was without peer: deeply informed about the subject matter of a given book (be it a literary biography or an analysis of the Qur’an, a silly novel by Norman Mailer or a pretentious study of Jesus by A.N. Wilson); unfailingly witty; and a stylist of distinction.

In his review of Philip Eade’s Evelyn Waugh: A Life Revisited, he wrote that “between the ages of fifteen and seventeen, [Waugh] acquired an almost freakishly mature mastery of English prose [and] for the remainder of his life he was all but incapable of writing a boring sentence.” I don’t know at what age he acquired the skill, but the same could be said of Paul Mankowski, whose sentences sparkled as well as instructed.

There would be much more Mankowski to anthologize if his religious superiors had not prevented him from publishing for years. That decision deprived the Catholic Anglosphere of one of its mightiest pens. My hope is that Jesuit at Large helps many of those so deprived discover one of the U.S. Church’s brightest spirits and noblest sons, on this first anniversary of his death in Christ.

About George Weigel 407 Articles
George Weigel is Distinguished Senior Fellow of Washington's Ethics and Public Policy Center, where he holds the William E. Simon Chair in Catholic Studies. He is the author of over twenty books, including Witness to Hope: The Biography of Pope John Paul II (1999), The End and the Beginning: Pope John Paul II—The Victory of Freedom, the Last Years, the Legacy (2010), and The Irony of Modern Catholic History: How the Church Rediscovered Itself and Challenged the Modern World to Reform. His most recent books are The Next Pope: The Office of Peter and a Church in Mission (2020), and Not Forgotten: Elegies for, and Reminiscences of, a Diverse Cast of Characters, Most of Them Admirable (Ignatius, 2021).
Xing

What would Cardinal Meyer say?

Unfortunately forgotten in most U.S. Catholic circles today, Cardinal Albert Gregory Meyer, archbishop of Milwaukee from 1953 to 1958 and archbishop of Chicago from 1958 to 1965, was one of the country’s leading churchmen in […]

A still from the film “St. Francis Xavier: To the Ends of the Earth”. / EWTN/Cristiana Video.

The challenge of Eucharistic coherence

In his encyclical, Ecclesia de Eucharistia, Pope St. John Paul II invited Catholics to “rekindle” our sense of “Eucharistic amazement,” for “the Church draws her life from the Eucharist,” which “recapitulates the heart of the […]