In his book The Early Papacy: To the Synod of Chalcedon in 451, Fr. Adrian Fortescue argues that the essential Catholic claims about the authority of the pope can all be found in patristic texts from the period referred to in the title.  You may or may not agree with him about that, but the papacy is not my topic here.  What I want to call attention to instead is a general exegetical principle Fortescue appeals to at the start.  He writes: 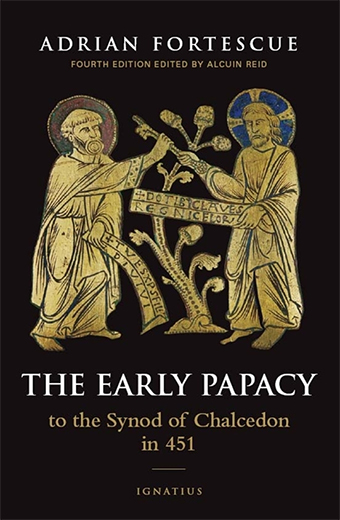 Before we quote our texts, there is yet a remark to be made.  Nearly all these quotations are quite well known already.  This does not affect their value.  If a text proves a thesis, it does not matter at all whether it is now quoted for the first or the hundredth time…  Naturally, people who deny [what we believe]… also have something to say about them.  In each case they make what attempt they can to show that the writer does not really admit what we claim, in spite of his words… The case is always the same.  We quote words, of which the plain meaning seems to be that their writer believed what we believe, in some point.  The opponent then tries to strip his words of this meaning… The answer is that, in all cases, we must suppose that a sane man, who uses definite expressions, means what he says, unless the contrary can be proved.  To polish off a statement with which you do not agree by saying that it is not meant, and leave the matter at that, is a silly proceeding.

There is another general issue here.  These early Fathers are witnesses of the belief of their time.  Now, the value of evidence increases as it is multiplied.  We must take the value, not of one text, but of all put together.  Here we have a great number of texts that all make for the same point.  The fact that all do make for the same point suggests the reasonable interpretation of each.  All can be understood naturally, supposing that their writers believed [what we believe]… If you do not admit that, you have to find a different, often a most tortuous, interpretation for each.  The rule of good reasoning is that one simple cause that accounts equally for all the phenomena is to be supposed the real one, unless it be proved false. (pp. 53-54)

For ease of reference, I am going to give the label “Fortescue’s Principle” to the thesis implicit here, though of course I am not thereby suggesting that it was original to Fortescue.  We can formulate it as follows:

Fortescue’s Principle: If a large number of texts from a certain period are all naturally read as teaching that p, and were for centuries afterward commonly understood as teaching that p, then there is at the very least a very strong presumption that they do in fact teach that p.

This principle is a matter of common sense.  It is, of course, possible that the natural interpretation of some particular text considered in isolation might not be the correct interpretation.  But the probability that it is incorrect decreases dramatically if lots of other texts from the same general time and place say the same thing on a natural interpretation.  To think otherwise, you’d have to believe that writers in general in that time and place just didn’t know how to express themselves clearly, and somehow all tended to misstate things in exactly the same way – which merely adds improbability to improbability.

For example, no one doubts that (say) nineteenth-century socialists were critical of capitalism and that nineteenth-century abolitionists were opposed to slavery.  If some contemporary historian came along and argued that we have for a century and a half been misinterpreting all the relevant statements from that period, no one would take him seriously.  It wouldn’t matter if he produced clever exegesis of this or that particular text that purported to show, based on nuances in linguistic usage, that some reading other than the natural one was possible.  The idea that all the relevant texts have been systematically misunderstood for that long is just too silly to credit.

Something like Fortescue’s Principle is implicit in the First Vatican Council’s teaching that “in matters of faith and morals… that meaning of Holy Scripture must be held to be the true one, which Holy mother Church held and holds” and that “it is not permissible for anyone to interpret Holy Scripture in a sense contrary to this, or indeed against the unanimous consent of the fathers.”  It is not merely contrary to common sense, but contrary to Catholic orthodoxy, to suggest that on some moral or theological matter the Fathers of the Church all misunderstood scripture or that the Church herself has for centuries done so.

All the same, Fortescue’s Principle is routinely violated by theologians who don’t like some doctrine that has always been understood to be the teaching of scripture and the Church Fathers, but who don’t want to be accused of rejecting the authority of scripture and the Fathers.  Worse, such violations of Fortescue’s Principle are shamelessly presented as if they were applications of good scholarly practice, when in fact they are contrary to it.

Here’s how the sophistry works.  First, some revisionist biblical or patristic scholar cobbles together a strained reinterpretation of a text that has always been taken to teach some traditional doctrine.  This is usually done with a great show of learning, heavy going about what the Hebrew, Aramaic, or Greek “really” says (never mind the fact that two millennia of theologians who also knew the relevant languages understood it the traditional way), and so on.  Then, other revisionist scholars casually and routinely cite this reinterpretation as if it has somehow established once and for all that the traditional interpretation is mistaken (when in fact the very most that can be said is that the novel interpretation might be defensible, though often even to say that much is too generous).  Similarly strained and tendentious reinterpretations of other texts are developed, and then also casually cited by other revisionists as if they too were definitive.

Before you know it, the revisionist scholars present this jerry-rigged collection of far-fetched reinterpretations as if they constitute the settled scholarly wisdom, and as if anyone who dissents from it hasn’t gotten the news or is otherwise out of touch.  Appeals to or defenses of the traditional interpretations are dismissed as hackneyed (“Oh, that again!”), or as shallow and non-scholarly exercises in “proof-texting.”  The whole thing is a gaslighting exercise.

For example, this is now a stock rhetorical ploy of theologians who don’t like traditional Christian teaching about sexuality, but who’d prefer to avoid contradicting scripture outright.  The tactic is to pretend that all the relevant texts have for centuries been misinterpreted, and that modern scholars have finally revealed their true import.  The proposed reinterpretations have easily been refuted by Robert Gagnon and other scholars, but that matters not a whit to the revisionists.  Their desire is not in the first place to determine whether modern attitudes really are consistent with scripture, but rather to find a way to make scripture consistent with modern attitudes – or at least to kick up enough dust that non-experts can be made to think that there is some doubt about what scripture really says.

Accordingly, theologians who want to push this extreme position without explicitly rejecting the authority of scripture and the Fathers have tried to come up with novel interpretations of the key texts.  None of these considered individually is terribly plausible, as I have shown in the cases of the reinterpretations defended by writers like Brugger, Griffiths, Hart, Finnis, and Fastiggi.  But even if one or two of them were defensible, the idea that the true import of all the relevant scriptural and patristic evidence has been misunderstood for two millennia is simply too silly for words, a clear violation both of Fortescue’s Principle and of the teaching of the First Vatican Council.

Eternal damnation is also manifestly taught in scripture and the Fathers in text after text after text.  In order to deny this, you have to believe that not just one or two passages, but the entire tradition has been misunderstood for centuries.

The gaslighting and dust-kicking-up represented by violations of Fortescue’s Principle is in fact not true exegesis at all, but eisegesis – reading some meaning into a text rather than out of it.  It is bad enough when theological modernists engage in this tactic, but as some of the examples cited above indicate, it is occasionally resorted to even by otherwise orthodox Catholics.  Perhaps without realizing it, they thereby abandon a principle which in other contexts they would find essential (as Fortescue himself does) in upholding the basic claims of the Church.

(Editor’s note: This essay originally appeared, in slightly different form, on the author’s blog and is reposted here with his kind permission.)

About Dr. Edward Feser 37 Articles
Edward Feser is the author of several books on philosophy and morality, including All One in Christ: A Catholic Critique of Racism and Critical Race Theory (Ignatius Press, August 2022), and Five Proofs of the Existence of God and is co-author of By Man Shall His Blood Be Shed: A Catholic Defense of Capital Punishment, both also published by Ignatius Press.

The courageous witness of “The Lion of Münster”

An overlooked chapter in the life of Bl. Paul VI

The Fall of Constantinople on May 29, 1453: A Cautionary Tale

An icon of the Blessed Mother looked down on me, then an atheist and former Muslim, as I visited Hagia Sophia years ago. The nave was so high that back in the day nearby residents […]