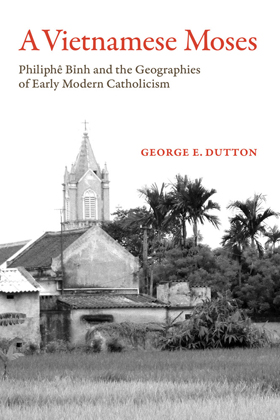 In his book A Vietnamese Moses: Philiphe Binh and the Geographies of Early Modern Catholicism, George E. Dutton recounts the saga of Father Philiphe Binh’s attempts to petition the Portuguese king for a new bishop for his region. Besides narrating Father Binh’s story, Dutton also interweaves explanations of how geographical factors shaped Vietnamese Catholics. For Dutton, Father Binh is a prototype of the transformation of the early modern Vietnamese Christian community. Although Dutton’s book provides many noteworthy insights, Dutton does overstate Father Binh’s significance in the history of Vietnamese Catholicism, which leads to an impoverished representation of its spiritual heritage.

Dutton’s exploration of the factors leading up to Father Binh’s conflict with his local bishop is both scholarly and thorough. In the late 1700s, the newly appointed Church authority for Father Binh’s region placed numerous restrictions on Vietnamese Catholics, but the most detrimental regulation pertained to the pronunciation of the word “grace” (Dutton 50). Previously, Portuguese Jesuits had allowed for a modified pronunciation of the word “grace” because the Vietnamese faithful had difficulty articulating the word (Dutton 54). However, the new bishop of Father Binh’s region insisted that “grace” be pronounced properly and threatened excommunication if the faithful did not comply. Father Binh’s community defied the regulations, leading to the community’s being labeled as schismatic. In defense of his community, Father Binh argued that it was “quite unfair that these devout Christians should be punished for their literal inability to conform their tongues to this tricky new pronunciation” (Dutton 55). Eventually, Father Binh travelled to Portugal to petition the king for a bishop who would allow his community to retain its distinct traditions. According to Dutton’s narration, Father Binh faced many insurmountable obstacles such as sickness, lack of funds, and opposition from many prominent Church leaders, and several times, Father Binh had to choose between persisting in his hopeless mission or returning home to minister to the remnant of the Christian community (Dutton 172). However, with what turned out to be misguided optimism, Father Binh refused to submit to his region’s ecclesiastical authority.

One crucial element of the book is Dutton’s interlaced analysis of the geographical factors that shaped the worldview of the Vietnamese Catholics. For example, Dutton explains that “the arrival and continuing presence of European missionaries began to transform Vietnamese geographical conceptions, suggesting new ways to think about cardinal directions, and with them new forms of self-conceptualization” (Dutton 125). With a different understanding of the directions of “East” and “West,” early modern Vietnamese Catholics no longer limited their understanding of the world to the Chinese realm, but began viewing themselves as integrated into the more global history of Catholicism (Dutton 125). Dutton shows the parallel between this newly emerging worldview and Father Binh’s story. Dutton says, “With the development of plans to send delegations to Macao and then Europe, the Padroado community [Father Binh’s] began an active, direct engagement with the larger geographies of global Catholicism” (Dutton 63). Dutton also reiterates this claim when he describes how Father Binh’s written chronologies combine the historical events of Europe, Catholicism, and Vietnam (Dutton 233).

Another significant aspect of the book is Dutton’s portrayal of Vietnamese Catholics as initiators in practicing their faith. While many historians have portrayed early Vietnamese Catholics as passive victims of intolerant rulers and thus at the mercy of European missionaries, Dutton debunks this view by describing Vietnamese Catholics as fiercely loyal to their spiritual patrimony. They were not merely pawns in the hands of European missionaries but were active participants in how they lived out the Faith (Dutton 62). Dutton argues that for Father Binh and the community, submitting to the appointed authority would mean betraying their lineage and heritage, a heritage imprinted by traditional Vietnamese customs and Jesuit ways of thinking (Dutton 54-56). Thus, Dutton seems to suggest that Father Binh’s defiance shows “the degree to which Vietnamese Christians were not merely the passive ‘sheep’ (62) of their European clerics but active participants in their own religious lives” (Dutton 62). Father Binh emphasized this sentiment when he wrote, “We are not animals who lie down and hide, we have risked death for the Lord and for the teachers and for our Christian brothers” (Dutton 62). Dutton, however, does not seem to recognize that Father Binh was not necessarily passionate about following Christ so much as he was about retaining long-held practices. Ironically enough, Father Binh can be viewed as acting against Christ, since his insubordination toward the local bishops prevented him and his community from being integrated and unified with Christ’s Body, the Church.

Throughout the book, Dutton seems to uphold Father Binh as an exemplar for early modern Vietnamese Catholicism. Father Binh and other Vietnamese Catholics not only saw themselves in relationship to a broader world but also began to recognize themselves as part of a spiritual lineage that transcended local community ties. This is seen when Father Binh compares his community with the Israelites. Father Binh says the following: “Our Christians were thus abandoned to hunger and thirst; they forced our Christians to bow to their priests, just as when the pharaoh forced the offspring of Jacob to become his subjects in the country of Egypt” (Dutton 45). When encouraging his community to be patient, Father Binh used the story of Moses’ absence from the Israelites to warn “his followers to remain steadfast in their allegiance to the Jesuit Church and not to begin to follow the false gods of the Dominicans” (Dutton 167). Dutton not only associates Father Binh with Moses; he even identifies Father Binh with the martyrs: “Binh’s forceful statement of the risks that he took echoes the Vietnamese tradition of Catholic martyrs, men and women who gave their lives in defense of their religious convictions” (Dutton 62).

However, Dutton’s portrayal Father Binh as the embodiment of prominent biblical figures and the Vietnamese martyrs is problematic. Admittedly, the Church authorities who replaced the Jesuits were not tactful, respectful, or charitable in their dealings with Father Binh’s community. Based on Dutton’s account, it is very clear that these officials did not respect or understand the community’s particular heritage. Nevertheless, even though Church officials may have been wrong in imposing the regulations, Father Binh committed a huge transgression by exhorting his community to resist the local Church authorities, thus prolonging the community’s excommunication. His stubbornness prevented his community from experiencing the graces of the sacraments. Although he believed he was serving his community, Father Binh ultimately engaged in fruitless labor. He spent several futile years in Portugal and left his flock in Vietnam without a shepherd. Even those officials who were once sympathetic towards Father Binh’s cause criticized him; a Bishop Galdino, who was once compassionate towards Father Binh and his followers, said, “It was their spirit of division rather than zeal that motivated them” (Dutton 140).

Furthermore, Father Binh chose to fight about factors that are non-essential to practicing the faith when he could have chosen to use the situation as a way to conform more closely to Christ, who himself was persecuted and misunderstood. It would seem that Father Binh did not sacrifice himself for the sake Christ, but he sacrificed himself for the sake of deeply embedded traditions—a contradiction to the lives of the saints and martyrs. Father Binh was so focused on retaining his community’s particular customs that he forgot that following Christ transcends any cultural norms or expectations. Being Christian does not merely mean loyalty to a distinct heritage, but means being integrated into a larger, universal community.

In the consistory of November 2016, among the 17 men Pope Francis elevated to the rank of cardinal was an 88-year-old priest who was neither a bishop nor of the eligible age to vote in […]

Vivian Dudro is Senior Editor at Ignatius Press (which publishes CWR). Over the last 35 years, she has written news articles, book reviews, and columns for various Catholic media, including the National Catholic Register, Catholic […]