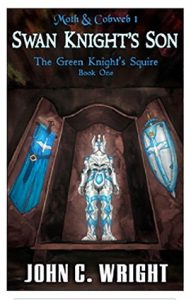 Deep down, human beings know we’re made for something epic.

In recent decades, successful Young Adult novels captured this truth in a variety of forms, from J.K. Rowling’s Harry Potter series to Rick Riordan’s Percy Jackson books. In this recurrent narrative, a teenager of uncertain parentage discovers he has supernatural powers, and the search for his identity leads him to find his destiny.

To Christians, this story rings especially true. As Pope Benedict XVI wrote in Spe Salvi, “man was created for greatness—for God himself.” There is a real sense in which, like these protagonists, baptized Christians have an epic calling. Like Harry Potter or Percy Jackson, we have powers greater than we know: God-given powers over ourselves, and over sin and darkness. And like these heroes, we desperately want to know who our Father is—our Origin and our Destiny. Earthly life is our epic adventure, a spiritual battle against powers and principalities, and a heroic quest for Heaven.

John C. Wright tells us this universal Christian story in his novel Swan Knight’s Son. Set in present-day North Carolina, Wright’s book is the first installment of a fantasy series for young adults. We meet the teenage hero, Gilberec Parzival Moth, whose chivalric name, silver-white hair, and ability to talk to animals suggest that he has more to him than meets the eye.

But our hero remains something of a mystery, even to himself. The fatherless Gilberec has grown up moving from town to town with his mom Ygraine—the name, we should note, of King Arthur’s mother. Like Arthur Pendragon, Gilberec is illegitimate; but like Arthur, he has a calling to immortal greatness.

Although a modern teenager, Gil wants more than anything to become a knight. His chivalrous outlook on life has led to his expulsion from school for taking on a gang of juvenile delinquents in combat. Thrust into the world on his own, but with the help of a talking stray dog, Gilberec trains for knighthood under the gruff tutelage of a magical bear. But when a stranger claiming to come from his father delivers him the key to a disappearing door, Gilberec’s life will change forever. With what he finds beyond the door (spoilers!), Gil goes a-questing; and serious trouble finds him right away.

Wright crafts a fun and colorful environment, blending “normal” reality with the fantasy world in a charming way. The author’s version of Blowing Rock, NC has elves, albino mammoths, and evil yeti stalking its town square. When he’s not training with the bear or swimming with a mermaid, Gil rents a cot at the local YMCA. And when the hero pawns a golden hairpin at a magical pawnshop, he gets some of his payment in Susan B. Anthony dollars. In a John C. Wright novel, worlds collide to make a different kind of normal.

Along the way, Wright offers us highly literate YA fiction: Arthurian legend, Gulliver’s Travels, and biblical language coalesce into an intelligent and readable adventure. It’s a page-turner and keeps up a good pace, except when the elfin knights get to talking in Arthurian knight-speak. Readers will, however, love Gil’s dialogue with his talking dog, as Wright shows real insight into the lovable—if distractible—mind of man’s best friend. Although it delicately suggests adultery (a perennial theme in Arthurian mythology), and although it contains knightly violence against the forces of evil, the novel is appropriate for most teens and provides enjoyable reading for any adult fans of this fantasy genre.

The old-fashioned courtly language spoken by some of the characters does echo the dialogue of Arthurian legends, but it occasionally gets dull, distracting, or even confusing. Furthermore, the novel’s otherwise-delightful art might have been improved by a gentle paring away of a handful of preachy moments. We find not-so-subtle critiques of cell phone addiction, the minimum wage, enforced cultural diversity-speak, and of the displacement of Christmas by “Winter Holiday.” Even readers who, like myself, share Wright’s worldview may find that his pet peeves risk jarring us out of our immersion in his wonderful fictional world.

But in complaining about political-correctness, the author makes the valid point that words have meaning—and actual power. Fighting terrible foes beneath the town’s enormous Christmas tree, Gil discovers that evil both fears and hates what the Nativity really means. A monstrous wolf snarls an ugly denial of the Incarnation: “God does not rut! He is neither begotten nor begets! There is no Christmas because there was no Christ!” In the ultimate blasphemy, echoing the sacrilegious claims of the so-called historical Jesus Seminar, the wolf continues, “No one has ever drunk the blood nor taken the flesh of Jesus, save wolf and wolf alone!”

It is a demonic perspective on Christ because, in the world of John C. Wright, the forces of evil include demonic and supernatural powers. As Gil’s mother tells him, “Men are the thralls and serfs, the gladiators and poppets, the concubines and cattle, the pets and toys of powers they do not see, do not know, and do not recall upon waking.” But there are good powers as well. We find good talking animals, good trees, and a powerful good magic which, as the mermaid tells him, “ultimately boils down to love.”

Indeed, Wright’s greatest accomplishment must certainly be this belief in what Hamlet once told Horatio: “There are more things in heaven and earth, Horatio, / Than are dreamt of in your philosophy.” Wright’s universe is a deep one, a fully real one that includes all the planes of existence denied by so much materialist fiction of our day. He writes:

To Gil, the idea that all this was real, that all the mysteries of myth and lore might be out there somewhere, hidden to most but open for him to find, the wonders and the horrors both, was an idea that made him feel lightheaded and yet feel more hard and solid than he had ever felt before.

Perhaps “fantasy” is the wrong word for Wright’s fiction, a fiction that is “more hard and solid,” more in-tune with the full scope of reality than many newspaper accounts of earthly life. These supernatural stories appeal to us because deep down, we know we have a lineage and a destiny leading out of this humdrum world. If for a moment we glimpse that fact, then authors like Wright will have accomplished their quest.

Was this 18th century priest a “Vietnamese Moses”?

In his book A Vietnamese Moses: Philiphe Binh and the Geographies of Early Modern Catholicism, George E. Dutton recounts the saga of Father Philiphe Binh’s attempts to petition the Portuguese king for a new bishop […]

The Living and the Dead and Alfred Lord Tennyson

Early and late, Tennyson’s theme was mortal beauty.  In The Princess (1847), when he was scarcely forty, he set it to an enchanting music. The splendor falls on castle walls And snowy summits old in […]

The most unexpectedly religious film of the year

One would have to be blind not to see a number of religious motifs in John Krasinski’s absorbing film “A Quiet Place.” […]