In 1108 Tughtegin, the Turkic atabeg of Damascus, offered to trade Gervase of Bezoches, the captured crusader Prince of Galilee, for the city of Acre (and two smaller possessions). Baldwin I, King of Jerusalem, refused. Such was the value of the city which had quickly become the main point of arrival for soldiers and pilgrims from Europe. So Tughtegin used Gervase’s scalp as an Islamic military banner and his skull for a goblet. Even unredeemed captives had value. 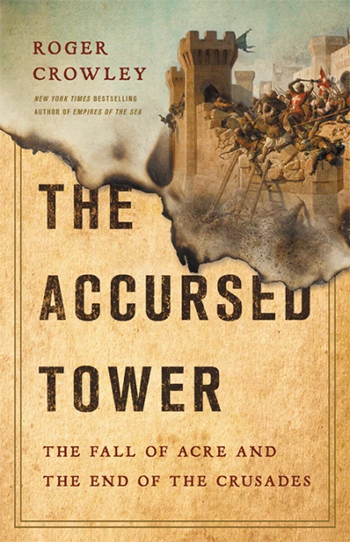 Acre was strategically located on the Levantine coast. It possessed a good harbor for shipping and was of significant value as a port to Genoese, Venetian, and Pisan merchants. Craftsman, artists, and laborers of all kinds found work in the bustling city. It was protected by the sea and a network of walls and ditches around the landward side of the city and the adjacent suburb of Montmusard. Towers built at intervals along the walls were the linchpin of Acre’s defenses. One tower was said to have been cursed by Christ Himself. Unsurprisingly called the Accursed Tower, it most likely acquired the name from various attacking armies—both Muslim and Christian—over the decades.

It is also the name that historian Roger Crowley gives his recent study of the fall of the last Crusader stronghold in the Levant. Crowley is no stranger to cities under siege. He is the author, among other books, of 1453: The Holy War for Constantinople and the Clash of Islam and the West and Empires of the Sea: The Siege of Malta, the Battle of Lepanto, and the Contest for the Center of the World. In The Accursed Tower, Crowley tells the story Acre in vivid and visceral detail. It is a thrilling tale. But he also gives the reader a sense of the city as symbol for the Christian West.

By 1291, the year Acre fell to Mamluk armies, the city had become a bastion of contradictions. It was the seat of the Kingdom of Jerusalem, the Holy City having long been lost to the Muslims. It was a destination for devout and daring Christian pilgrims, but a den of iniquity for residents. It was a city of exotic scents, but teeming with malodorous sewage.

It was a formidable stronghold, but rotted from within by factionalism and civil discord. For Europe, though, Acre was all the remained of Outremer (“overseas”) and the hope of restoring the Holy Land to Christian rule.

And that hope rested largely on a tower that guarded the city at its most vulnerable spot, a salient that jutted out from its landward walls. The Accursed Tower allowed Acre’s defenders an excellent vantage point to watch for hostile forces in the approaches to the city. And it maximized the defenders’ ability to shoot arrows, launch boulders, or send Greek fire down upon attacking armies. But it wasn’t impregnable.

Mamluks—slave-warriors of the Fatimid sultan in Egypt—were masters of siege tactics and weaponry. They employed mangonels and trebuchets of varying sizes and used them with deadly accuracy. They also devised screens to protect their miners and sappers while they went about the work of undermining Acre’s towers and walls. And, what’s more, the Mamluk army consisted mostly of infantry and light cavalry, making them exceptionally mobile. They defeated the terrifying Mongols at Ain Jalut some thirty years before and had won a succession of battles afterward. The Franks—as the crusaders in the Levant were known—had been pushed to the very sands of the sea. And, at Acre, they were up against it.

The sea offered some hope. The people of the city looked for the ships of Henry II, King of Cyprus (and the rump Kingdom of Jerusalem). On May 4th, 1291 he finally arrived with a fleet of ships and a small number of troops. But it was too little, too late. As Mamluk miners and sappers made steady progress, it became clear to Henry and the Masters of the Templars, Hospitallers, and Teutonic knights, that the city would fall. On May 18th, and continuing over the ensuing days, there was a mad rush for the quay. The wealthy could afford to escape aboard the few ships available for evacuation. The poor were not so fortunate. Though the Genoese galleys made no such distinctions and attempted to rescue as many people as possible.

The walls breached, the towers brought low, left the remaining fight to the labyrinthine streets. It is a part of the story Roger Crowley tells particularly well. The reader feels the urgency, panic, and terror of soldiers and citizens. It is an increasingly desperate scene given to both heroism and cowardice. One senses, too, the exhausted end of a once vibrant Frankish culture in the Levant. Crowley aptly quotes the anonymous Templar of Tyre, a probable eyewitness to Acre’s fall: “Thus as you have been able to learn, was all of Syria lost, and the Saracens took and destroyed it all.” He lamented the loss of everything, “so that altogether the Christians did not hold a palm’s breath of land in Syria.”

Or, as Crowley succinctly puts it, “It was all over in the Holy Land.”

Paradoxically, perhaps, the loss of Acre was not as significant to the Christian West as it is today. Crowley is right to point out that it “did not stir the level of lamentation that the loss of Jerusalem had a century earlier.” There were feeble attempts to regain a foothold in the Levant after 1291 but none amounted to much. And though the phenomenon of crusading was far from over (e.g. the Reconquista in the Iberian peninsula continued until 1492), it was certainly over in the Holy Land.

The Accursed Tower: The Fall of Acre and the End of the Crusades
By Roger Crowley
Basic Books, 2019
Hardcover, 272 pages