Editor’s note: On September 17, 1787, the U.S. Constitution was signed by 39 delegates to the Constitutional Convention. Since 2005, September 17th has been celebrated in the United States as both Constitution Day and Citizenship Day. The following excerpt about the Constitution is from America on Trial: A Defense of the Founding (Ignatius Press, 2020) by Robert R. Reilly. 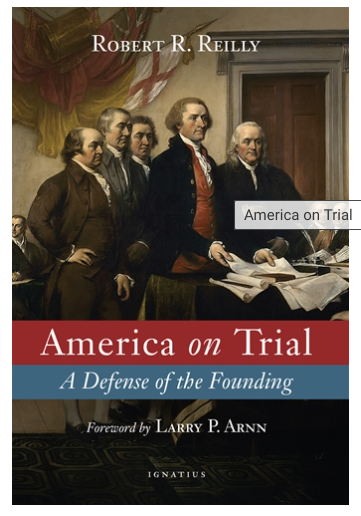 If this, then, is who man is, he ought to govern himself through rational deliberation and free choice, rather than be subject to accident and force. Constitutional government is exactly the form of government that attempts to direct people to behave reasonably and can exist only to the extent that they do. The political result of the principle of equality, correctly understood, is precisely limited government. The need for limited government gives rise to constitutionalism, which enshrines the rule of law. The rule of law derives directly from the principle of equality and requires that all persons be equal before the law. The rule of law is the necessary condition not only of liberty, but also of excellence, because by removing the artificial constraints upon man, it leaves, as Lincoln said, “an open field and a fair chance for [man’s] industry, enterprise and intelligence”. The U.S. Constitution endeavored to embody this understanding of things.

A close reading of the Constitution leads to the conclusion that, divorced from natural law and Christian principles, the Constitution would be incomprehensible— devoid of compelling moral vision or unifying principles. (One would do well to remember that it was ratified by an overwhelmingly Christian citizenry in each of the thirteen states.) As mentioned earlier, however, the proof for this thesis is indirect because there are no Christian principles per se implanted in the Constitution. The Constitution does not declare principles; it provides for their implementation. It considers the principles on which America is founded so self- evident that it does not even name, much less defend, them. In its short preamble, the Constitution briefly mentions, without defining, justice, general welfare, and the blessings of liberty, clearly indicating that these are commonly accepted ends.

In fact, what is not in the Constitution is, in some ways, more interesting than what is. More interesting still are the presuppositions that these omissions suggest. I do not mean things already contained in the Declaration of Independence, but those that are not mentioned at all, things that might be considered truisms. But the problem with truisms, as G. K. Chesterton once quipped, is that people forget that they are true. So, the truisms that the Constitution omits because it takes them for granted can tell us much more about what the Founding Fathers intended than we might think.

The Founders had a keen appreciation of the ill effects of Original Sin both in individuals and in groups. Moreover, they realized that any document describing how men should govern and be governed must make ample provision for man’s basically flawed nature and his unfortunate propensities. The Constitution implicitly recognizes this flawed nature and these propensities when it advocates the separation of powers. Because of man’s imperfections and inclinations to evil, constitutional order must be arranged so as to prevent a concentration of power— legislative, executive, and judicial— from falling into the hands of a single individual or group of individuals who could then misuse it. “Concentrating these in the same hands is precisely the definition of despotic government”, warned Jefferson.

He was of one mind with John Adams, who wrote to him: “The fundamental Article of my political Creed is, that Despotism, or unlimited Sovereignty, or absolute Power is the same in a Majority of a popular Assembly, and Aristocratical Counsel, an Oligarchical Junto and a Single Emperor. Equally arbitrary cruel bloody and in every respect, diabolical.” In Federalist 47, James Madison echoed Jefferson: “The accumulation of all powers, legislative, executive, and judiciary, in the same hands, whether of one, a few, or many, and  whether hereditary, self- appointed, or elective, may justly be pronounced the very definition of tyranny.” The holders of such power could rule over other men as if they, the rulers, were gods. It mattered not if it were an “elective despotism”, for a despotism it would remain. The constitutional division of the government into the three branches— executive, legislative, and judicial— and the checks and balances set up among them were emplaced to prevent such a concentration from occurring. Furthermore, the Constitution implicitly acknowledges Original Sin and its baneful effects in that, as we have mentioned, it does not offer any solution to the problem of evil. The notion of Original Sin protects government from undertaking something of which it is incapable. The Founding Fathers clearly considered a solution to evil beyond the realm of politics and beyond their own individual competence, which is why they necessarily limited government. But this does not mean that they did not think that a solution had been provided. Indeed, they believed that the “solution”— in the form of Christianity— was so widely known and accepted by them and their fellow countrymen that there was no need to make it explicit.

Limited government does not—and due to its limited nature cannot—usurp man’s destiny or grant itself salvific aims. It implicitly acknowledges the need for salvation and its own impotence before this need. Politics cannot meet the demands of the human soul, for it cannot achieve perfect justice. The Founders realized that one must look beyond politics for the spiritual fulfillment for which man hungers. To repeat, Socrates showed that any attempt to fulfill the soul’s ultimate desire through politics— by trying to achieve perfect justice here— would transform the state into a totalitarian enterprise. The Founders knew this.

Without this limiting view of politics, constitutional thinking is not possible. Only such a vision as this supports the effort to restrain political power. (It is also this view that should restrain any impulses to democratic millenarianism.) If man has no transcendent end, politics will consume him completely in some form of totalitarianism. The proper role of government is to maintain a temporal order sufficient for the pursuit of man’s higher ends, especially by securing man’s fundamental rights.

One of those rights, which it is the role of government to secure, is the right to property—so often thought to be simply a matter of economic efficiency or, worse, a spur to materialism. It is exactly the right to private property that insulates the individual from the caprices of state power and creates a protected legal and material space within which he can exercise his freedom. The right to private property stems directly from, and is a requirement of, the spiritual inviolability of the human person. Without this right, man is naked before the state. Without economic freedom, there is no political freedom. What can happen under these conditions was made horrifically clear by the depredations of the totalitarian regimes in the twentieth century, which denied this right and imprisoned or slaughtered their defenseless subjects in the scores of millions.

In fact, the profound implications of the other propositions mentioned above, all of which flow from the Declaration, can also be illustrated by examining the consequences of their opposites. If, for instance, man is not a political creature endowed with reason, why attempt to order political life based on deliberation and representation? Likewise, if man does not have free will, deliberating over what he ought to do is superfluous. If reason is incapable of discerning good from evil, then deliberations are meaningless. Freedom, obviously, is a hollow idea if free will and reason do not exist. These faculties themselves make sense only in an order of nature that directs man toward ends that make him fully human. This is the perspective that formed the Founders and that infuses the Declaration of Independence, the Constitution, and the Founding Fathers’ ancillary writings with moral purpose. The American Constitution makes no sense divorced from these presuppositions. As such, anything that undermines these premises ultimately undermines the Founding.

About Robert R. Reilly 19 Articles
Robert R. Reilly was Senior Advisor for Information Strategy (2002-2006) for the US Secretary of Defense, after which he taught at National Defense University. He was the director of the Voice of America (2001-2002) and served in the White House as a Special Assistant to the President (1983-1985). A graduate of Georgetown University and the Claremont Graduate University, his books include The Closing of the Muslim Mind, Making Gay Okay, and Surprised by Beauty: A Listener's Guide to the Recovery of Modern Music. His most recent book, America on Trial: A Defense of the Founding, is published by Ignatius Press.