Siobhan Nash-Marshall is uniquely placed to offer penetrating and illuminating insights into one of the darkest and most horrific chapters in human history.

The chair of philosophy at Manhattanville College in New York is the author of The Sins of the Fathers, a book about the Armenian Genocide, and translator of the newly published novella “Silent Angel” by Antonia Arslan, which is set against the backdrop of the genocide.

Dr. Nash-Marshall’s book exposes Turkish denialism about the genocide and shows how the dehumanizing effects of modern philosophy are responsible for the butchering of a whole people. Her translation of Silent Angel has provided readers in the English-speaking world with another book by Armenian-Italian novelist Antonia Arslan, whose earlier novel about the genocide, Skylark Farm, was an international bestseller.

In this exclusive interview for The Epoch Times, Nash-Marshall speaks by email of the genocide and about her translation of Arslan’s latest book.

Joseph Pearce: Silent Angel is a novella set against the backdrop of the Armenian Genocide. Could you give a brief explanation and description of this genocide and when it happened?

Siobhan Nash-Marshall: The Armenian Genocide was the first genocide of the 20th century. The triumvirate at the helm of the Ottoman Empire at the time (Enver Pasha, Talaat Pasha, and Djemal Pasha) took advantage of the World War I and launched a full-scale slaughter of the Armenians. A million and a half of them (that is, three-quarters of the Armenian people who lived in their historic homeland at the time, in what is today called Eastern Turkey) were slaughtered in the most horrendous ways imaginable.

The men were separated from their families. They were usually killed on the spot. The women and children were then forced to “relocate” by foot into the Syrian desert. Every sort of horror was visited upon them along the way. Most of them died of thirst, starvation, fatigue.

The genocide is a very well documented event. Newspapers from every continent chronicled it in gruesome detail. The Allies coined the term “crime against humanity” when they called upon the Turks to stop killing the Armenians. Pope Benedict XV, in his letter to the sultan, called it the “leading of the Armenian people almost to its extinction.” It was part of an operation that the U.S. ambassador at the time, Henry Morgenthau, called the “whitewashing of Anatolia.”

Mr. Pearce: Apart from being the translator of Silent Angel, you are also the author of The Sins of the Fathers, a book about the Armenian Genocide. Could you tell us a little about the book?

Ms. Nash-Marshall: My primary concern in Sins of the Fathers is modern philosophy. This is not strange for a Catholic. Pope Leo XIII railed against modernism. He also tried to protect the Armenians during the pre-genocidal massacres (1894–1896) perpetrated by Sultan Abdul Hamid. This is not a coincidence.

In my book, I tried to shed light on five crucial characteristics of the Armenian Genocide.

First, it was predicated on modern Western thought: All of its perpetrators read and carefully studied 19th-century European philosophers.

Second, it shows the price of modern political hypocrisy. The genocide did not happen overnight. It was preceded by nearly 30 years of negotiations in which the European Powers called for reforms in the Armenian provinces, signed treaties of all kinds with the sultan, but let the Armenians be slaughtered. Pope Leo XIII intervened and tried to mediate between the European Powers and negotiate with the sultan because he was well aware of the plight of the Armenians and the hypocrisy of the Powers. 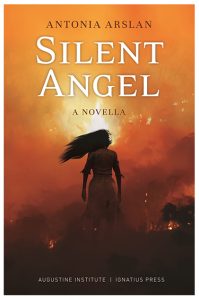 Third, the Armenian Genocide highlights the historical engineering inherent in modern philosophy. Although the actual killing of the Armenians was mostly completed by 1923, the government of Turkey today is still trying desperately to rewrite Armenians out of the history of the lands of modern Turkey.

Fourth, the Armenian Genocide highlights the social engineering inherent in modern philosophy. The Armenians were killed in order to construct a “new Turkey” built along the lines dictated by French and German philosophy. [In Sins of the Fathers, Dr. Nash-Marshall shows how the intelligentsia of the “new Turkey” were inspired by Karl Marx and Georg Wilhelm Friedrich Hegel and also by the French philosopher Auguste Comte.]

Ms. Nash-Marshall: Moush was one of the Armenian provinces in the Ottoman Empire. It was very important culturally and religiously. It had important monasteries, at one of which, for instance, Casper, one of the Three Kings of the New Testament, was buried, or so Armenian oral traditions tell us.

As the location was important, so too is the Book of Moush. It is called the “Msho Charantir”—the “Homiliary of Moush.” It actually exists. It is the largest extant Armenian manuscript. It is on display in the Matenadaran, the great library in Yerevan, the capital of Armenia. One can plainly see its two pieces.

All Armenians know the story of the book. It was divided into two parts during the genocide and carried by two women who managed to save it. The names of the women who saved it are lost. Silent Angel gives the women names and tells their story.

Mr. Pearce: The author of Silent Angel, Antonia Arslan, wrote a previous bestselling novel, Skylark Farm, also about the Armenian Genocide. Could you tell us a little about that novel and how it differs from Silent Angel?

Ms. Nash-Marshall: Skylark Farm (“La Masseria delle Allodole”) is Antonia Arslan’s first novel, and the first part of what is likely going to be a pentalogy. The second part is Road to Smyrna, the third The Sound of the Wooden Pearls. She dealt with part of it also in Letter to a Girl in Turkey. Alas, only the first has been published in English.

Skylark Farm is a personal novel for Arslan, as can be seen from her dedicating it to her aunt, a survivor of the genocide, with whom she grew up. It is a difficult story. Like all descendants of families and cultures ravaged by genocide, Antonia Arslan has had personally to deal with what can be called the problem of Job since her birth. Her family has seen evil face-to-face and has had to understand how to hold on and deepen their faith through it. And so has she. In Skylark Farm, she shows that diabolical evil, sparing no details. It was horrendous.

Like a true classicist, Arslan weaves her family’s story in Skylark Farm as an epic. This is the perfect genre for a Job–like story. It allows Arslan to weave a timeless perspective in her story.

Both of these things make Skylark Farm very different from Silent Angel. In Skylark Farm, Arslan is trying to grapple with the horror of what happened to her family and her people. In Silent Angel, she focuses on the saving of her people.

Mr. Pearce: Who or what is the “silent angel” that gives the novella its name?

Ms. Nash-Marshall: Antonia Arslan loves the title Silent Angel. In Italian, as we’ve mentioned, her novella was published with the title Book of Moush. There are many silent angels in Arslan’s novella. One of them is the Book of Moush itself. It cannot speak, so it is silent. But it can show, and by showing it becomes a messenger of God, bringing the message of salvation.

Another angel is the angelic guide who guards over the people who are called upon to save the book. The angel plays an important role in the story. Yet another angel in Silent Angel is Zacharias, the sole survivor of his village, who leads the party carrying the book to safety. Two more of the novella’s angels are the Greeks, Makarios and Eleni, who protect the Armenians who are saving the book from those who would kill them.

Silent Angel is filled with angels, with messengers of God. Arslan has laced the story with them.

Mr. Pearce: Without wishing to give the plot away, could you give us a summary, not of the plot but of the principal characters?

Ms. Nash-Marshall: Silent Angel is the story of Anoush, which means “sweet” in Armenian, and Kohar, which in Armenian means “jewel.” They are simple women. Anoush is a wife and mother, and is shy and soft-spoken. Kohar is boisterous, has a fiancé, and is a decision maker. They are farmers. They come from a beautiful place. In their adventure they are joined by Hovsep, which is Armenian for Joseph, who is an orphan; by Eleni, the Greek midwife; and her sweetheart, the Greek Makarios.

Mr. Pearce: The literary landscape of “Silent Angel illustrates the horrors of human cruelty and depravity but also the triumph of human endurance and virtue, as well as suggestions of God’s providential presence in the midst of darkness. In what ways does the novella achieve this, and what does it offer 21st-century Americans in the sense of its being somehow inspirational or applicable to our own times and culture?

Ms. Nash-Marshall: We are living in difficult times, and risk forgetting what is truly important in our lives. We are distracted by events, by violent emotions, by unrest. We also are always tempted to think that we are alone. This is especially true for us now, not just because of COVID-19, but because those links that once seemed to bind our society have loosened: families, parishes, communities.

(Editor’s note: This interview was originally posted at www.theepochtimes.com on June 28, 2020, and is reprinted here with kind permission of The Epoch Times.)