Rome, Italy, Mar 19, 2019 / 11:00 am (CNA).- The author of a newly translated book has spoken of the “extraordinary” willingness of the Coptic Martyrs to “bear witness to the Christian faith” as they were kidnapped and beheaded at the hands of ISIS in Libya in 2015.

Martin Mosebach is the author of the The 21. A Journey into the Land of the Coptic Martyrs, recently published for the first time in English. In an interview with CNA, he spoke about his experience in Upper Egypt examining the lives of the 21 Coptic Orthodox Christians. 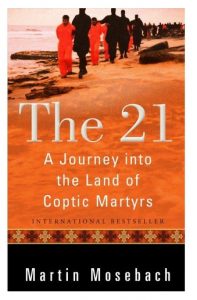 The interview is below; it has been edited for clarity and length.

These meetings were indeed extraordinary.

They are poor people, not living in utter misery, but people who live a very humble life, small farmers. And many of them have now lost their breadwinner since these men used to send money to their families, their children, their wives, and their elderly relatives back home. But still, these people talked with such peacefulness, such pride of the fact that their family produced a martyr, someone ready to make the ultimate sacrifice in defense of the faith.

I have noticed that this readiness to bear witness to the Christian faith is particularly widespread in the villages of mainly rural Upper Egypt, where some regions are almost exclusively Christian. I spoke with young people. Young men and women in their twenties told me that they would gladly become martyrs  — in the same way as an American or a German child might say: “I’d like to become an astronaut.”

This readiness was really there, and it was seen as something which gives you energy, fills you with pride and joy.

The video that ISIS released in 2015 with the beheading of the 21 men in orange jumpsuits was entitled “A message signed with blood to the nations of the Cross.” How did this message resonated across the Middle East and beyond to the rest of the world, did you see unintended consequences?

This video has been seen in the whole world with horror and disgust, of course. And I am sure that this was also the reaction it stirred in many in the Middle East. The Egyptian Christians, however, saw this video with different eyes: they saw it as a precious, rare document of martyrdom.

The whole attitude of these families and the attitude of the martyrs themselves reminds us so strongly of the martyrs of the first centuries, of how the early Christian community reacted in the face of persecution. And the communities from Upper Egypt reacted in exactly the same way to modern persecution at the hands of ISIS – or hostile Muslim neighbors. For them, it is the story of a victory.

This is the very same look of the first centuries: the authentic view early Christianity had on martyrdom.

In recent years, in the wake of the so-called “Arabellion” – in which President Mubarak was overthrown by the Muslim Brotherhood and then President Morsi arrested — there has been a  current hidden civil war in Egypt. Persecution, destruction and attacks against Christians have become worse. But for the Copts, this is nothing new.

The actual situation is very difficult, that is true, but the Copts have a history of 1,400 years of oppression, and the recent years are nothing more than a new chapter. The Copts lost their civil rights with the Islamic conquest. There have always been waves of persecution and destruction; they are used to it.

Now you wrote in your book that in your conversations with the families, not once did the concept of revenge or justice for the executioners came up. How is forgiveness a part of  the story of these Coptic martyrs?

In fact, that is another astounding aspect: There was no talk of revenge at all in these families. There was no talk of revenge, no talk of justice. There were no demands to support the Christian communities, to help and protect them. Let me put it this way: the persecutors simply did not exist; they had no face. And, indeed, they had worn face masks; their whole attitude was that of being simply messengers of Satan.

It is the eternal story: The Christians are in the world to fight the good fight, and in every century they have to face new challenges, new temptations. This is only one in a long chain. The individual persecutors were of no interest to them. I would say they lived in a world completely orientated towards the afterlife, and maybe they did not even perceive these persecutors as individuals, but rather expressions of an evil power.

I know several of these martyrs were in their early twenties. Was there something, in examining their lives and their formation in the Coptic Orthodox faith, that you saw that gave them the strength to sacrifice their lives for Christ at that moment?

In terms of religious education, the Coptic Church is very well organized – at least since the 20th century. Since that time, the Coptic Church has adopted the habit of Sunday school after the liturgical education of the young people. A young Copt knows what he or she believes in.

I have often noticed that Christian faith is a very complex thing. And not many Christians know their religion –  but the Copts do! And then they have this long and splendid liturgy, which they celebrate every Sunday. The martyrs, the young people, knew it by heart because they were also church singers, singers ordained by the bishop. So you can say, they have spent great part of their lives and almost all of their leisure time in Church.

They were young people who had based their whole life on the Church, on faith.

What is the greatest lesson that you think you will take away from spending time with this persecuted Christian community in Egypt?

My greatest lesson is that martyrdom has the function of working as a fifth Gospel. The Evangelists were all martyrs, and when the first Christian martyrs entered the scene, the Gospels had not yet been written. The martyrs are the true messengers of Christian faith, and as long as there are martyrs, we do not have to worry about the Church.

And this is very important, especially today, in a time where the image of the Catholic Church has been tarnished, and where there are great doubts, especially in the Western world, as far as its responsibilities and its leaders are concerned.