“I am perfectly aware,” apologized Fr. Robert Hugh Benson in the preface to Lord of the World, “that this is a terribly sensational book.” But for fans of dystopian apocalyptic novels, no apology is necessary: that’s part of the fun. It’s a gripping, dark novel, and a famous one, especially after Pope Francis endorsed it in a homily in 2013. We might see it as a deadly-serious precursor to Chesterton’s The Flying Inn, or a prophetic portrait of modernity without God. Benson sets his novel in the twenty-first century, and offers both a timely encouragement and an urgent challenge to today’s Catholics, who face not only external opposition but also the internal wounds of corruption and infidelity within the Church. 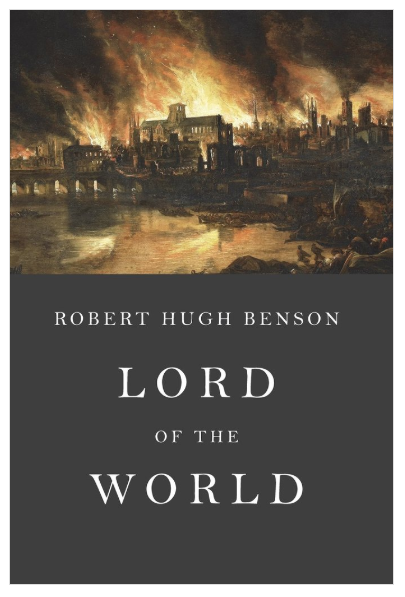 Benson’s futuristic novel, published in 1907, stands apart from the usual dystopian fare on our big screens and bestseller lists. Yes, it tells of man’s abuse of scientific progress; yes, it describes the struggle of individuals against an oppressive socialist structure; sure, it features flying machines and a new world order. But Fr. Benson—an Anglican priest who converted to Catholicism and whose prolific output included 15 other novels—understands these things as part of the battle between Heaven and Earth. It’s a good reminder that, as St. Paul wrote to the Ephesians, our struggle is not with flesh and blood but with the principalities, with the powers, with the world rulers of this present darkness, with the evil spirits in the heavens.

The imagined future of Christianity seems grim. When Benson’s novel begins, mankind has reached the twenty-first century. Secular humanism, powered by freemasonry, has largely triumphed in the West. Socialism and materialism govern the world. The universities have been closed. Europe, Asia, and America have divided the globe between them. The Church in Lord of the World undergoes widespread apostasy: lay people, and even priests and bishops deny Christ and embrace the supposed divinity of the human race. Much of the world has turned away from God, leaving only a remnant Church. Will Christ’s Church endure? Will God at last defeat and imprison the Evil One? The answer, for Benson, is yes. But the victory of the Lord gets worked out—as it did on the Cross—in the patient, humble endurance of suffering and death.

The novel centers on a faithful priest, Father Percy Franklin, who struggles to minister to the remaining Christians in England. As the novel opens, the world stands on the brink of a war between East and West, until—to the relief of all mankind—a mysterious and charismatic American statesman single-handedly negotiates world peace and a final end to war. The man’s name is Julian Felsenburgh; he is thirty-three years old, and he begins to inspire fanatical devotion around the planet. Everywhere he goes, he commands obedience and love; crowds fall silent at his presence, and one by one the governments of the world submit themselves to his rule. Little by little, he emerges as both the antichrist and a type of secular anti-pope. His first name Julian means “descended from the god Jove,” but it also evokes Julian the Apostate, the notorious fourth century Roman Emperor who tried to reestablish paganism. His last name Felsenburgh means, loosely, “rock fortress.” Thus Julian Felsenburgh is hailed both as a divine figure and a rock upon which the secular humanist church—complete with neopagan rituals—may be built.

Where is God in all this, wonders Father Franklin, as he struggles to understand the success of the enemies of God, and the apparent failure of the Church to hold its own:

What was the Catholic Church made for if not to convert the world, and why then had Almighty God allowed it, on the one side, to dwindle to a handful, and on the other, the world to find its peace apart from Him?

It’s an unexpectedly prophetic question for Catholics in the real twenty-first century. As if the opposition of the world were not enough, now we find the Church undermined from within by corruption, scandal, sexual violence. Benson’s answer echoes as a challenge to Christians in any time of persecution or difficulty for the Church militant: a radical re-dedication of ourselves to Christ.

In the novel, this takes the form of a heroic new religious order, called for by the Pope: the Order of Christ Crucified, open to all the faithful, male or female, lay or priest. In addition to the three evangelical counsels of Poverty, Chastity, and Obedience, the Order has a fourth: the desire for martyrdom. From Rome, the last earthly haven of Christianity, the Order streams forth. Even married couples part company to devote themselves to the order, and

the smoke of burning went up in the squares where household property, rendered useless by the vows of poverty, were consumed by their late owners; and daily long trains moved out from the station outside the walls carrying jubilant loads of those who were despatched by the Pope’s delegates to be the salt of men, consumed in their function, and leaven plunged in the vast measures of the infidel world.

The reports of martyrdoms come soon:

In Dusseldorf eighteen men and boys, surprised at their singing of Prime in the church of Saint Laurence, had been cast down one by one into the city-sewer, each chanting as he vanished: “Christi Fili Dei vivi miserere nobis,” and from the darkness had come up the same broken song till it was silenced with stones.

When the enemies of God bomb Rome out of existence, the handful of surviving cardinals secretly elect a new Vicar. The Church endures, undergoing a radical simplification of its hierarchy and its liturgical practices. With now only twelve cardinals, like the twelve Disciples of Christ, the Church must focus only on essentials: evangelization, true doctrine, and the true worship of God. As the Church goes underground, some

ritual requirements were relaxed; mass might be said with any decent vessels of any material capable of destruction, such as glass or china; bread of any description might be used; and no vestments were obligatory except the thin thread that now represented the stole; lights were nonessential; none need wear the clerical habit; and rosary, even without beads, was always permissible instead of the Office.

In Benson’s portrait, the Church returns to the simplicity of early Christianity, stripping away the pomp and circumstance of Rome. As such, he challenges Catholics today to recognize which things are truly essential to the Gospel of Christ, and to the Church He founded on Earth.

Finally, Father Franklin, caught up in the heart of this spiritual and earthly drama, finds himself in Nazareth, while Felsenburgh, the apparent “Lord of the World,” launches the final persecution of the faith, a law forbidding the practice of all religion, backed with the penalty of death. As the net draws closer around him, Father Franklin rides out and finds himself gazing upon a nearby plain: Megiddo, also known as Armageddon. In the climactic final confrontation, the Church of God will go out to meet the enemy as a Eucharistic procession, in a battle that will bring about the end of the world.

In Robert Hugh Benson’s fiction, the struggle has ended with the end of days. But for us, and for each generation of Christians, the struggle begins anew. We may not need a new religious order. We may simply need Christians to radically re-dedicate themselves to imitating Christ. As we face this crisis in the Catholic Church, let us imitate Benson’s “Order of Christ Crucified,” whose fidelity to God exceeds even their love of life. As the names of these faithful martyrs come rolling in, Benson describes them thus: “It was the first word of God’s reply to the world’s challenge.”

Analysis: Justice by papal fiat points to serious lack of trust within the Church

The Vatican announced on Saturday that Pope Francis has reduced two Chilean bishops to the lay state. One of the defrocked is an 85-year-old man reported now to be suffering senile dementia, Francisco José Cox […]

Here’s the prayer for Ukraine cited by Pope Francis

A Ukrainian soldier rescues a child / Photo courtesy of the Ukrainian Greek Catholic Church on March 5, 2022.

In The Screwtape Letters, C. S. Lewis’s senior devil reminds his protégé that every age and every culture has its characteristic vices and virtues. It is the devil’s job to confuse men as to what […]