In the midst of the joy of the Infant Lord’s Presentation in the Temple, old Simeon comes crashing in with a bit of tragic reality for the young Mother: This Child will be “a sign of contradiction” destined to cause both the rise and the fall of many; further, “a sword” will pierce your own heart (cf Lk 2:35).

When we talk about “Mary at the foot of the Cross,” the Catholic goes back in his mind’s eye to the scene in John 19, but to get the context, we need to go back to John 2, the wedding feast of Cana. And that requires even further context – because the Fourth Evangelist was both an extraordinary theologian and a master literary writer.

The Fourth Gospel is often called “the Gospel of the New Creation” because the sacred author seeks to present the life and ministry of Jesus as a return to God’s original plan before the sin of our first parents. Indeed, we get a clue to this when we realize that the first words of this Gospel reprise the first words of the Book of Genesis: “in the beginning.” That original life situation of total harmony between God and man, among human beings, and between man and nature was disrupted by the disobedience of Adam and Eve. Christ’s signs of power are acts of restoration, pointing to the in-breaking of the Kingdom of God. The first of those signs is the Lord’s changing of the water of the wedding feast to the choicest wine. That sign is effected at the behest of Mary, whom Jesus addresses as “woman,” once more evocative of Genesis, where we meet the first “woman.” Mary is God’s answer to Eve.

The next time we meet “the mother of Jesus” (who, interestingly, is never named in this Gospel because she represents more than her personal identity) is at Calvary. Using the Hebraic technique of “inclusion,” the Evangelist presents Our Lady at the beginning and end of her Son’s public ministry, thus having us understand that she who was present at the beginning and the end was there throughout. Just as the first “woman” led the first “man” into sin, so too does this later “woman” – the New Eve – lead the New Adam into the reversal of that sad primordial saga.

Now we behold the New Eve standing courageously and lovingly – not fainting or disconsolate – standing (yes, Stabat Mater) beside the Tree of the Cross which is likewise the divine response to the tree of temptation. And the dying Jesus utters His last will and testament: “Woman, behold your son. Behold your mother.” Before Our Lord breathes His last, He wants to ensure not merely a natural protection for His Mother; He desires to bring about a supernatural relationship between the Beloved Disciple (also never named) and “the woman.” Although Mary is losing the Son of her womb, she is being given the gift of a multitude of children in the person of the Beloved Disciple, representative of every believer, for Jesus is “the first-born among many brethren” (Rom 8:29). For his part, the Beloved Disciple (which means you and I) are given the gift of a loving Mother, on whose powerful intercession he (and we) can rely if he does indeed take Mary “into his home.” Taking her “into his home” is more than giving her a room in his house; it means making room in his life for her, who is now his Mother in the order of grace.

With supreme majesty, Jesus “gives up his spirit,” but only after “knowing that all was now finished,” completed, consummated. What brought about that fulfillment? Nothing less than the entrustment of the Beloved Disciple and the Holy Mother to one another. In other words, Christ’s work of redemption would not have been fully accomplished had He not brought about the union of disciple and Mother. Simply put, making room for Mary in one’s life as a disciple is not an “add-on” or worse, inappropriate; it brings the covenant of salvation to completion. The “woman,” who was mildly rebuked at Cana for trying to anticipate Jesus’ “hour,” now receives a divine mandate to be a motherly intercessor for His brothers and sisters in the family of the Church. And so, in the new decree establishing the feast of Mary as Mother of the Church, we hear this all summed up thus:

Indeed, the Mother standing beneath the cross (cf. Jn 19:25), accepted her Son’s testament of love and welcomed all people in the person of the beloved disciple as sons and daughters to be reborn unto life eternal. She thus became the tender Mother of the Church which Christ begot on the cross handing on the Spirit. Christ, in turn, in the beloved disciple, chose all disciples as ministers of his love towards his Mother, entrusting her to them so that they might welcome her with filial affection.

Notice, too, that the sacra conversatio which takes place on Calvary is carried on by the virginal Lord, His virginal Mother, and the virginal disciple, for this is also the moment of the birth of the Church which, like Mary, is both virgin and mother. As blood and water flow from the side of the dead Christ – symbols of the sacramental life of the Church in Baptism and the Eucharist – the Church is born. That realization caused St. Augustine to observe: “Here the second Adam with bowed head slept upon the cross, that thence a wife might be formed of him, flowing from his side while he slept.”

There is, however, an intensely human dimension to this scene as well; after all, a mother is losing a son – an innocent son to a painful, humiliating, excruciating death. While we can reflect on Our Lady’s stalwart faith, that does not negate the maternal suffering entailed, which was nothing less than the fulfillment of the prophecy of Simeon as the sword of sorrow did truly pierce her own heart. She becomes a co-sufferer with her Son, and that suffering of hers is also meritorious, not just for her but for all her new sons and daughters.

Blessed John Henry Cardinal Newman produced two sets of stations of the cross, the longer of which St. John Paul II used on Good Friday of 2001. The former Protestant, for whom Marian doctrine and devotion had been an initial stumbling block to coming into full communion with the Catholic Church, became one of Mary’s greatest devotees. With great pathos, he describes Our Lady’s emotions in the fourth station where Mother and Son meet on the road to Calvary. Newman writes:

Jesus rises, though wounded by His fall, journeys on, with His Cross still on His shoulders. He is bent down; but at one place, looking up, He sees His Mother. For an instant they just see each other, and He goes forward.

Mary would rather have had all His sufferings herself, could that have been, than not have known what they were by ceasing to be near Him. He, too, gained a refreshment, as from some soothing and grateful breath of air, to see her sad smile amid the sights and the noises which were about Him. She had known Him beautiful and glorious, with the freshness of Divine Innocence and peace upon His countenance; now she saw Him so changed and deformed that she could scarce have recognised Him, save for the piercing, thrilling, peace-inspiring look He gave her. Still, He was now carrying the load of the world’s sins, and, all-holy though He was, He carried the image of them on His very face. He looked like some outcast or outlaw who had frightful guilt upon Him. He had been made sin for us, who knew no sin; not a feature, not a limb, but spoke of guilt, of a curse, of punishment, of agony.

Then in language equal to the beauty of Michelangelo’s Pietà, Newman offers this meditation for the Thirteenth Station, full of empathy but also with holy and hope-filled joy:

The multitude have gone home. Calvary is left solitary and still, except that St. John and the holy women are there. Then come Joseph of Arimathea and Nicodemus, and take down from the Cross the body of Jesus, and place it in the arms of Mary.

O Mary, at last thou hast possession of thy Son. Now, when His enemies can do no more, they leave Him in contempt to thee. As His unexpected friends perform their difficult work, thou lookest on with unspeakable thoughts. Thy heart is pierced with the sword of which Simeon spoke. O Mother most sorrowful; yet in thy sorrow there is a still greater joy. The joy in prospect nerved thee to stand by Him as He hung upon the Cross; much more now, without swooning, without trembling, thou dost receive Him to thy arms and on thy lap. Now thou art supremely happy as having Him, though He comes to thee not as He went from thee. He went from thy home, O Mother of God, in the strength and beauty of His manhood, and He comes back to thee dislocated, torn to pieces, mangled, dead. Yet, O Blessed Mary, thou art happier in this hour of woe than on the day of the marriage feast, for then He was leaving thee, and now in the future, as a Risen Saviour, He will be separated from thee no more.

So, what have we learned from St. John the Evangelist? At Cana, the New Eve launches her Divine Son on His public ministry as He transforms water into wine, prefiguring a yet greater transformation that will occur in the Holy Eucharist as He changes wine into His Precious Blood. At Calvary, the New Eve stands beneath the Cross, in the lovely words of the Sacred Liturgy, “so that. . . the evil one, who conquered on a tree, might likewise on a tree be conquered” (Preface for the feast of the Exaltation of the Holy Cross). In that “hour,” two momentous events occur: the Church is born from the wounded side of her Lord and that Lord’s Mother becomes our Mother as well. His saving death bestows on us the gift of everlasting life.

The Mother of Sorrows will bid us join her once more at the foot of the Cross, which is the altar of this church, as the sacrifice wrought once and for all on Calvary is re-presented, renewed for us. Permit me to suggest that you make your own yet another prayer of Cardinal Newman:

O Holy Mother, stand by me now at Mass time, when Christ comes to me, as thou didst minister to Thy infant Lord – as Thou didst hang upon His words when He grew up, as Thou wast found under His cross. Stand by me, Holy Mother, that I may gain somewhat of thy purity, thy innocence, thy faith, and He may be the one object of my love and my adoration, as He was of thine.

(Editor’s note: This homily was preached by the Reverend Peter M. J. Stravinskas, Ph.D., S.T.D., at the Church of the Little Flower in Coral Gables, Florida, on March 10, 2018.) 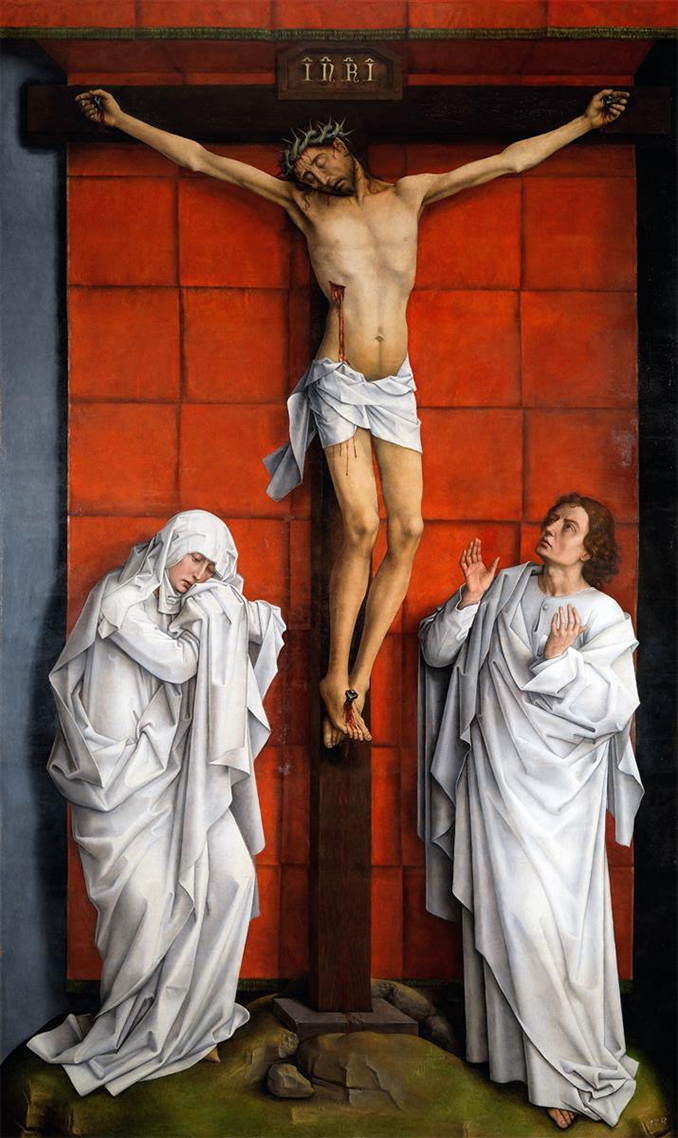