Christian martyrdom is a current event. Every month, hundreds of Christians die for the faith around the world. That’s why Father Robert Hugh Benson’s 1912 novel Come Rack! Come Rope! still speaks to us today. Newly re-released in an attractive paperback edition by Cluny Media, Benson’s novel tells a tale of Christian martyrdom—one to which we should return for courage and inspiration as the world grows increasingly hostile to Christ. 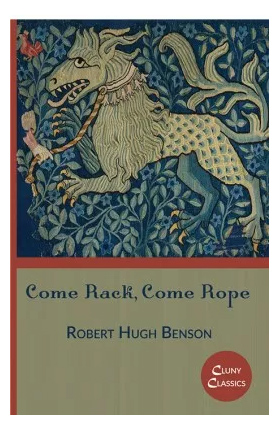 Few knew persecution like English Catholics in the sixteenth century, for whom the Protestant Reformation was a matter of life and death. Set during Elizabeth I’s bloody persecution of “Papists,” Benson’s novel tells the story of the young Robin Audrey and his lady-love, Marjorie Manners. Our heroes have promised themselves to each other in marriage, but they also recognize that God might be calling them to something far more dangerous. Inspired by the bravery and fervor of the fugitive Catholic clergy, Robin receives a call to the priesthood that he knows could also send him to the gallows. Ordained abroad, Robin returns in disguise to bring the sacraments to the people of England. The quick-witted Marjorie, though yearning for the convent, remains in England to conceal and protect priests and fellow Catholics. But the English authorities continue to draw their net tighter and tighter around the resilient Catholics. Soon it becomes a game of cat and mouse as Father Robin Audrey risks everything to minister to his flock, with torment and death hot on his heels.

Father Robert Hugh Benson was not a martyr himself. But as the son of the Archbishop of Canterbury, he became a very public scandal when he converted to Catholicism in 1903. His novel depicts this terrible conflict between the public faith of a Protestant nation on the one hand and the private conscience of the Catholic on the other. With simple, beautiful prose, Benson’s period fiction brings the era to life. He peoples his novel with real historical figures including St. Edmund Campion, Mary Queen of Scots, the Catholic conspirator and would-be assassin, Anthony Babington, or the notorious priest-catcher, Richard Topcliffe.

At the heart of the novel lies the sacramental drama of a persecuted people who desperately need the sacraments. Denied the ministry of their priests, the English Catholics suffer and die without Holy Communion, confession, or extreme unction. Faced with a chance—at great personal risk—to smuggle the Eucharist to the imprisoned Mary Queen of Scots, Fr. Robin recognizes “that desolate cry of souls that longed and longed in vain for those gifts which a priest of Christ could alone bestow.”

It’s also a story of vocation. Both Robin and Marjorie recognize that they are free to marry. Yet they know in their hearts that God has other plans for them. As a priest himself, Father Benson knew that obedience to God’s call requires a death to self, but will ultimately lead us to life. As Marjorie reflects, “A broken heart and God’s will done would be better than that God’s will should be avoided and her own satisfied.”

Cluny Media offers beautiful paperback reprints of Catholic classics and other public domain texts, and it is with joy that we welcome new editions of titles by Benson, John Henry Newman, François Mauriac, Georges Bernanos, and even P.G. Wodehouse. Still, readers may wish the editors of Come Rack, Come Rope had included a foreword or introduction (some of their titles do), and the text itself contains a regrettable number of typographic errors. Furthermore, the press has inexplicably removed the exclamation marks from Benson’s original, more emphatic title, Come Rack! Come Rope! Nonetheless, we hope this recent edition of Benson’s book will spark new interest in one of England’s best Catholic novelists. The story of Christian martyrs will always be evergreen, as Christians around the world continue to suffer and die for their faith. As Christ says in the Gospel of John, “In the world you will have trouble, but take courage, I have conquered the world.”

Ultimately, Benson depicts in graphic terms some of the terrible consequences of division within the Body of Christ. It begins in the family, as Mr. Audrey, Robin’s father—weary of the fines and persecution his Catholic family has suffered—conforms to the Church of England and publicly takes Anglican communion. It is the tragic concession of a man who decides, in Benson’s telling phrase, “to make peace with his times,” rather than suffer the cross. Once a priest, Robin must cut off all communication when his father becomes a magistrate charged with enforcing the Protestant law of the land. Indeed, old Mr. Audrey will face a horrific choice as the novel reaches its climactic end.

Finally, Benson dramatizes the division in Christ’s body most fully in the tortured bodies of the English Catholic priests. Racked until they can barely stand, then hanged, drawn, and quartered, these brave men are literally torn and cut to pieces in the butchery of places like Tyburn square. As we reach the 500th anniversary of the Protestant Reformation, we can mourn that the Body of Christ remains divided. Still, Benson’s powerful novel remains an inspiring tale of courage and fidelity. It shows us the power of God’s grace turning frail men and women into saints, giving them a love for Christ and His Church that will not waver, come rack or come rope.

The year 2019 marks 190 years since Britain’s Parliament passed the Catholic Relief Act of 1829, commonly described as Catholic Emancipation. It removed the last traces of anti-Catholic laws which had been variously enforced since […]

“The devil always leaves us in the lurch”

Orestes Brownson’s strange book, Like a Roaring Lion, has something fascinating about it, as he picks apart the grave errors that render men vulnerable to the […]

A novel depiction of the ups, downs, joys, and healing found in Purgatory

Fictional portrayals of purgatory have a grand lineage. Dante climbed the seven-tiered mountain centuries ago, and Tolkien placed his character Niggle (in the short story “Leaf by Niggle”) in a sort of otherworldly hospital-cum-labor camp. […]