At a lecture in 1992, biologist and atheist Richard Dawkins famously claimed that

Faith is the great cop-out, the great excuse to evade the need to think and evaluate evidence. Faith is belief in spite of, even perhaps because of, the lack of evidence.

Dawkins and the New Atheists repeatedly assert that Christian belief in God, miracles, and supernatural reality has no foundation in fact. They further insist that until overwhelming evidence to the contrary appears, supernatural occurrences can be understood as frauds, errors, or as natural phenomena that science will someday explain. 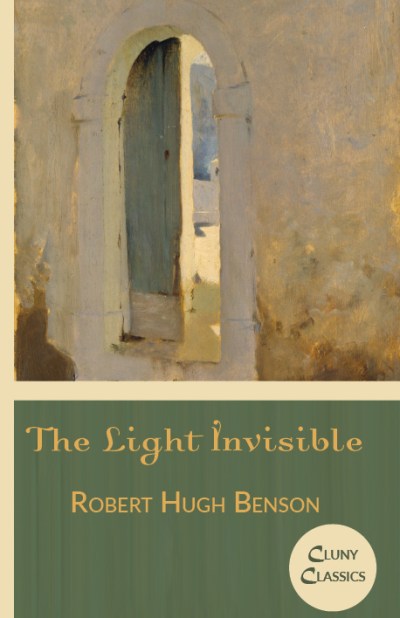 True to form, G.K. Chesterton already addressed this error over a century ago in his 1908 book, Orthodoxy. “[M]y belief that miracles have happened in human history is not a mystical belief at all,” he insisted, “I believe in them upon human evidences as I do in the discovery of America.”

Indeed, for many it isn’t hard to find evidence of supernatural events, miracles, and Divine involvement in history. I myself have a cousin who was saved from death by an angel, and one of my friends was cured of a crippling disease at Lourdes. Ask around, and you’ll find that lots of people have seen something like this—a moment where the supernatural realm intersects or overlaps with the natural one.

These kinds of miraculous occurrences inform the stories in Robert Hugh Benson’s 1903 book, The Light Invisible, recently reprinted by Cluny Media. In it, Benson tells a series of otherworldly stories, linked by a narrative thread: an old priest tells a writer about the supernatural visions and experiences he has received periodically throughout his life. In it, we find a well-written and powerful picture of the mysterious Reality that lies beyond—and at times within—our everyday world. Published while he was still an Anglican priest, The Light Invisible shows that Benson was already well on his way to Rome; indeed, he would enter the Catholic Church the very same year, and would receive Catholic Holy Orders in 1904. A celebrated preacher and the son of the Archbishop of Canterbury, Benson also wrote more than a dozen novels, including his most famous, titled Come Rack! Come Rope! (1912). Cluny Media’s new edition of The Light Invisible is a welcome reprint of this melancholy, insightful little book.

Reminiscent at times of the fiction of George MacDonald, Benson’s stories range from beautiful to macabre. In one, a man keeps encountering strangers bearing the different wounds of Christ. In another, the priest describes seeing a demon gazing with sick delight upon the body of dead bird. In the most harrowing tale, two boys stumble upon some nomadic peasants who practice a horrific pagan rite known as “the blood eagle”.

But the greatest insight of Benson’s book is his deep understanding of the nature of prayer. In a stunning chapter, the priest-narrator tells of visiting a contemplative religious order and witnessing a nun praying before the tabernacle. At first, in his heart he scorns this life as ineffective, even a waste of energies better spent actively in the Church and the world. But suddenly God opens the priest’s eyes. In his mind, he perceives “that there ran a vital connection from the Tabernacle to the woman.” Then he sees the great power within that tabernacle:

Something within it beat like a vast Heart, and the vibrations of each pulse seemed to quiver through all the ground . . . Or you may think of it as that faint movement of light and shade that may be seen in the heart of a white-hot furnace. Or again you may picture it as sound—as the sound of a high ship-mast with the rigging, in a steady wind….

This prayer-communion of the nun with God becomes “a kind of engine that radiated an immense light or sound or movement.” And he suddenly sees that her quiet prayer, supercharged by the Divine Will, shapes history and human lives across the globe.

There ran out from this peaceful chapel lines of spiritual power that lost themselves in the distance, bewildering in their profusion and terrible in the intensity of their hidden fire. Souls leaped up and renewed the conflict as this tense will strove for them. Souls even at that moment leaving the body struggled from death into spiritual life, and fell panting and saved at the feet of the Redeemer on the other side of death.

The chapel seems “full of a murmurous sound and a luminous mist as the currents of need and grace went to and fro,” even while the priest knows that to earthly eyes the “silence was deep and the air dim.” But for a moment, he has witnessed the power of prayer to work miracles, when God’s supernatural force intervenes in our reality through the cooperation of a human heart.

Atheists are not alone in their doubting of miracle and mystery; many Christians, too, labor under the assumption that the age of miracles has passed, and that God has ceased to involve Himself in human affairs in any surprising or unexpected way. But Benson’s narrator proposes, in a series of supernatural tales, that God has startling power here and now, and never ceases to use it for our good—in both visible and invisible ways. Cardinal Crescenzio Sepe views the reliquary with the blood of St. Januarius in 2009. / Paola Migni via Flickr (CC BY 2.0)

Over the Christmas break, I spent a fair amount of time binge-watching Jordan Peterson videos. For those not in the know, Peterson is not the latest hip-hop sensation; he is a psychology professor from Toronto […]