Andrew Cannon, Ph.D., is the author of Mere Marriage: Sexual Difference and Catholic Doctrine. The book has been described by Rev. Dennis J. Billy, CSsR, the Robert F. Leavitt Distinguished Chair in Theology at St. Mary’s Seminary and University (Baltimore), as a work that “makes an important contribution to moral theology by demonstrating that John Paul II’s understanding of the conjugal act is a development of the Church’s teaching in Humanae Vitae.” It has also been praised by Mary Ellen Bork and Christopher West, among others. 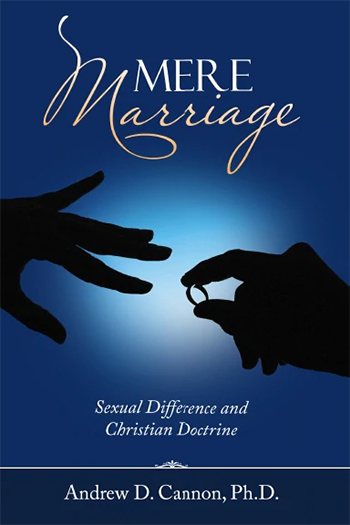 CWR: Tell us a bit about yourself.

Andrew Cannon: First, thank you for asking me to sit for an interview. … I’m happily married for 52 years. We have five adult children and ten grandchildren. Life is good. My education has been in Catholic schools, from elementary to graduate school but not in the usual way. I went to college at night while working full time, majored in philosophy, graduated in 1968, and married in 1969.

CWR: How did you get interested in this topic?

Andrew Cannon: Well, I witnessed the tremendous upheavals anticipating Humanae Vitae and the dissent following Humanae Vitae‘s promulgation that divided the Church. The thought of contracepting never entered our minds. I never thought Humanae Vitae was wrong. At the time, I thought the dissent would be short-lived. My schooling helped me understand the arguments being made on both sides. But the arguments left me cold. I thought there was more to Christian married couples contracepting than all the heated arguments were talking about.

Andrew Cannon: Well, for example, one side argued circumstances could make it okay for Catholic married couples to use contraception. The other side argued that even good ends cannot justify evil means. In other words, an extremely personal, visceral matter was debated in abstract language about a process or formula to determine the morality of contraceptive conjugal acts. That didn’t quite reach the question of what makes contraceptive conjugal acts wrong. The answer to that question would turn on the ultimate spiritual and mystical meaning of conjugal acts.

Now, fast forward thirty years or so. I read St. John Paul II’s “theology of the body,” one talk per day, for three or four months. Again, my training in philosophy helped me understand what I read. Finally, I realized, the theology of the body answered the big question. In a highly original teaching, the theology of the body made Humanae Vitae‘s doctrine compelling. However, it was a radical proposal. I wanted to make sure I got it right. To do that, I went back to school and earned two masters degrees and a doctorate in theology.

CWR: St. John Paul spent nearly five years expounding his “theology of the body.” Can you summarize it in a few paragraphs? Why do you think he took that approach?

Andrew Cannon: I’ll take the second question first. After Humanae Vitae, Catholic institutions fractured. Catholics, religious and lay, in Church institutions were pressured to take sides. A stalemate resulted, and the division continued to grow into what we now call the culture war.

This put the Church in the midst of a behemoth struggle to uphold the dignity of the human person. John Paul learned from his friend Cardinal Henri de Lubac that massive assaults on the foundations of the Christian Faith, like the body and sex, can’t be overcome with polemics. To meet a massive assault on the dignity of the human person, you have to get down to the root of the problem. De Lubac urged that the whole matter be studied from a new point of view. Then you may be able to see straight, and the remedy will be clear.

The root of the problem, then, is the Christian understanding of marriage. And so, the question to address was: What is the ultimate spiritual and mystical meaning of marriage and the conjugal act? John Paul’s investigation reached conclusions by using methods that would disrupt how theology had been taught for centuries. This is the kind of development that calls for an unhurried pedagogy; a deep, cool, calm, and peaceful analysis. That is why I think John Paul took five years to unfold the theology of the body, and it was not until the tail end of the talks that he disclosed that the whole catechesis was a commentary on the doctrine contained in Humanae Vitae.

The theology of the body appealed to the authority of Scripture, interpreted according to a method that was suited to the personal character of marriage and of conjugal acts. John Paul observed and communicated the experience of the characters in the drama of creation in the Book of Genesis.

Now, to answer your first question, instead of a summary, I’ll cut to the chase. The theology of the body teaches that man, whose dignity comes from being created in the image of God, and is in the image of God because of his intellect and free will, is also in the image of God by virtue of sexual difference, by being created as male persons and female persons. Moreover, the communion of persons formed by the one-flesh union of man and wife, the conjugal act and/or marriage, is a primordial sacrament of the Blessed Trinity. For that reason, it is a sacrament of all Christian mysteries and the foundation of all sacraments and grace.

CWR: You connect the theology of the body with Pope Paul VI’s Humanae Vitae. I don’t see them as opposed to each other, but I haven’t seen anyone attempt to “harmonize” them, either.

Andrew Cannon: The theology of the body itself harmonizes them. It says that all those papal reflections are an extended commentary on the doctrine contained in Paul VI’s encyclical. It reinforces this by saying that Humanae Vitae and the theology of the body are united organically and homogeneously. These statements make it clear that both teachings concern the conjugal act and/or marriage.

CWR:  Some commentators have noted that St Augustine and St Thomas Aquinas were not in favor of using “familial” language as an image of the Blessed Trinity. How do you respond to that?

Augustine’s psychological analogy to the Trinity identified the mind and its operations of knowledge and of love to explain how three distinct things could be one. Ratzinger called this an error and reductive of the Trinity because it confines the Trinity to a sub-part of a human individual and recognizes neither the full personhood of each member of the Trinity nor their existential relationship to one other. These limitations disadvantaged any consideration of a family analogy to the Trinity.

By contrast, Aquinas’ robust Trinitarian theology incorporated both the personal and the existential dynamics of the Trinity, i.e., the un-generate Father’s eternal generation of the Son, and their reciprocal self-gift in love spirating the Holy Spirit. Thomas’ Trinitarian theology lends itself to a family analogy. Nevertheless, Thomas neglected to develop the same dimensions of man in his theological anthropology. His truncated anthropology considered man as a rational animal without developing the personal and existential dimensions of man that would have made the family analogy to the Trinity easier to see. Instead, he joined in Augustine’s rejection of the analogy and said he saw no need for it.

John Paul’s Theology of the Body avoids both of these pitfalls.

CWR: Where does the conjugal act itself fit into the whole picture?

CWR: Some have argued that the theology of the body is a novelty and, on that very score, should be disregarded. In your judgment, is it a novelty or a genuine development of doctrine?

Andrew Cannon: Doctrinal development is an historical process, so time will tell. We are in an early phase when most of the faithful may not have heard of the theology of the body. Others who are aware of it have not all agreed on its importance or a uniform interpretation of its meaning. Based on my research, however, my private judgment is that history will increasingly recognize the sacramentality of the conjugal act as developed in John Paul’s theology of the body.

Andrew Cannon: Doctrine develops in response to crises, and Catholic doctrine concerning sex has been in crisis since Humanae Vitae (and actually, long before that document). John Paul’s proposal addresses the problem directly, persuasively, and in an evangelically appealing manner. History’s verdict will tell. My opinion is that the theology of the body is a genuine doctrinal development in the making. Caution, I’m not a professor, a priest or a bishop. I’m a married man for more than half a century who believes that what John Paul II taught in the theology of the body is true.

Pedro Gabriel has penned a response to my most recent CWR article, which focused on the moral theology of Pope Francis. Gabriel’s essay is full of the kind of sophistry one has come to expect […]

Your Eminence: I noted with interest your recent announcement of a “binding synodal process” during which the Church in Germany will discuss the celibacy of the Latin-rite Catholic priesthood, the Church’s sexual ethic and clericalism, […]

A concise, accessible presentation on Paul VI, the Pill, and the Sexual Revolution