Recently the capacious novelist Jonathan Franzen disclosed an ongoing preoccupation with “the inescapable nature of religion.” This is welcome news from unexpected quarters, proof that (as Pope Benedict XVI puts it) “men today feel the form of faith as a burden and yet at the same time are inspired by the desire to believe, otherwise they would find it quite easy simply to drop the whole thing without more ado.” But then we discover that “religion,” for Franzen, is a synonym of the “fundamentally irrational basis for everything we think and do and espouse.” 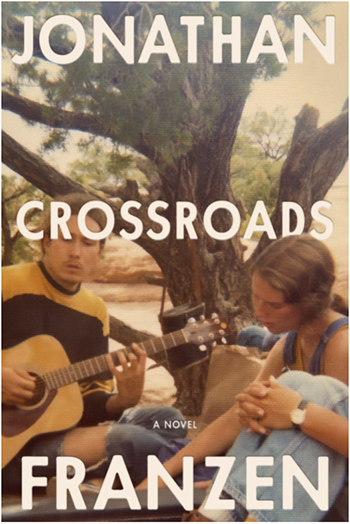 In his National Book Award-winning novel The Corrections, an allusion to that irrational fantasy of Christian salvation appeared in the form of Aslan, a drug that “exerts a remarkable blocking effect on ‘deep’ and ‘morbid’ shame.” In his new novel Crossroads, shame shows up again, and, again, an allusion to Christian fantasy reverses the assertions of the old Adam.

Marion Hildebrandt, mother of the novel’s central family, recounts the best Christmas of her life. Traumatized by a bad breakup and abortion that are for her associated with the festive season, she narrates an early holy day with her husband, Russ, when they stayed in a hotel near the Sangre de Cristos in New Mexico. Snow-bound, Marion spied another family apparently also stranded by the weather, “And it was like those little girls were the family we were going to be like.” Outside, someone artfully arranged a sleigh, rigging lights and achieving a masterful illusion: the reindeer “looked like they were flying.” A cowboy donned a Santa suit and circled the lot, waving at all comers.

Though Marion had always thought the man in red was “scary and creepy,” she was smitten with the look on the stranded girls’ faces as they stared at the sleigh: “I don’t think I’ll ever see more pure wonder and joy.” The girls linger at the window, looking out and saying “‘Oh! Oh! Oh!’ It was just pure joy and credulity. Their utter belief in what they were seeing was just the most beautiful thing . . . It was like being reborn, just by watching those girls and their reaction.”

Andrew Lang argues that fairy stories (an omniscient father figure + flying reindeer + a North pole of plentitude surely qualifies) represent “the young age of man true to his early loves, and have his unblunted edge of belief, a fresh appetite for marvels.” J.R.R. Tolkien takes this notion to task, contending that for Lang the “teller of marvelous tales to children” must “trade on their credulity”; it is as if, given their lack of experience and attendant impaired ability to distinguish fiction from fact, children fall prey to fairy stories.

On the contrary, Tolkien corrects: enraptured young believers with “the heart of a child” need not necessitate “uncritical wonder” or “uncritical tenderness”; they are keen to see that justice is done, even in the fantasyland, and attentive to the “laws of that world.” Only if the Secondary World is consistent will belief be sustained. He also mourns the relegation of fantasy to the nursery, challenging the conventional myth that as we get older we become suspicious, wary, less willing to engage in “willing suspension of disbelief” in the presence of the fantastic. Tolkien really started to “escape” into the necessary enchantments of fantasy not during nursery school but around the time he took to the trenches.

The present tense Marion “basically didn’t believe in” what Tolkien would call the “eucatastrophe” of Christ’s resurrection from the dead, and Jesus’ divinity remains “something of a question mark” for her. She is disenchanted and doubtful, so that memory of the credulous children has something of the fairy tale about it: she is like the elder who reads her children fables in what Tolkien calls a “somewhat tired, shabby, or sentimental state of mind”; because she cannot become enchanted herself, she can suspend disbelief only through concerted effort. “Suspension of disbelief,” says Tolkien, is a kind of “subterfuge we use when condescending to games or make believe,” or in cases when we try to “find what virtue we can in the work of an art that has for us failed.”

Many years prior to her enchantment with the children, Marion was institutionalized on Christmas day, a painful reality she has wholly concealed from her husband Russ. Maybe in part on account of his ignorance, he voices a very different reading of the reindeer: “He said he was disgusted by the parents—that they were encouraging their children to worship a false idol. That they were lying to their kids and neglecting the true meaning of Christmas, which had nothing to do with Santa Claus.”

Stupefied by his seriousness, Marion goes out of her mind; seeing the children had been for her a “kind of magical rebirth—something truly Christian, by the way”: a vehicle for forgiveness and healing. For her, as for Franzen, Christian truths are as irrational as flying reindeer; they equivocate between what Tolkien calls Secondary Belief (when someone tells you a story which you know is made up but you temporarily believe it anyhow) and Primary Belief (when someone tells you a story and you know it really happened).

“It was only an illusion”; Marion could see that well enough, “but because it was only an illusion I could be an innocent little girl again myself.” She screamed at Russ to the point of scaring him, furious that he had arrested her fantasy. But hers was a fantasy on several levels: conscious of the illusion as illusion, she was cut off from that deep cleansing that can only come from enchanted faith. The quickness with which she loses grip on forgiveness reveal the sentimental core of her borrowed belief.

Franzen is right. Religion is natural—inescapable—for humans. Tolkien is right, too. Fantasy is a “natural human activity.” But fantasy, Tolkien tells us, “does not destroy or even insult Reason; it does not either blunt the appetite for, nor obscure the perception of, scientific verity.” Rather, the “keener” the reason, the “better the fantasy will make.”

The same holds true for religion. Far from being maddeningly illogical, Christianity is the most reasonable fulfillment of all fantasies tilting toward the final Eucatastrophe. The “joy of deliverance” won by Christ’s resurrection is not a mere sentiment but the result of Primary Belief: our response to encountering a story that we know really happened. This belief bestows knowledge rather than suspending it. It is not the same as provisional knowledge, as when we say “I believe such and such to be the case, but I don’t really know.”

About Joshua Hren 7 Articles
Joshua Hren is founder of Wiseblood Books and co-founder of the MFA at the University of St. Thomas. He regularly publishes in such journals as First Things and America, National Review and Commonweal, Public Discourse and LOGOS. Joshua’s books include: the novel Infinite Regress; the short story collections This Our Exile and In the Wine Press; the book of poems Last Things, First Things, & Other Lost Causes; Middle-earth and the Return of the Common Good: J.R.R. Tolkien and Political Philosophy; How to Read (and Write) Like a Catholic; and Contemplative Realism: A Theological-Aesthetical Manifesto.

Tolkien, Lewis, and The Wind in the Willows

There is a striking passage in The Problem of Pain where C.S. Lewis writes about awe and the Numinous. He draws on Malory, Shakespeare, and Wordsworth to exemplify his points but also approvingly quotes a […]

Rarely do I find myself looking to modern Hollywood for morality tales, either on screen or in headlines. And yet, every once in a while, a film is released that draws on truths incorruptible by […]