T.M. Doran (tmdoran.com) is the author of several novels, including Toward the Gleam, Terrapin, and Iota. His first novel with Ignatius Press, Toward the Gleam, won acclaim from Tolkien readers across the globe. In it, an Oxford professor going by the pseudonym of “John Hill” discovers an ancient text bound in red. Using his expertise with languages, Hill begins translating the text but soon attracts the attention of a powerful man bent on using the information in the mysterious book for his own gain. 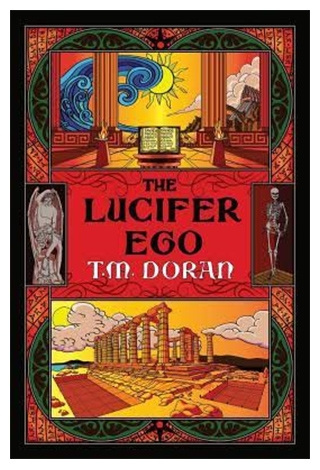 Doran recently self-published a sequel to Toward the Gleam titled The Lucifer Ego. In it, the same ancient manuscript is being sought—after having been stolen from its hiding place. As competing forces seek the book, archeologist Frodo Lyle Stuart, along with his friend Beatrice and his brother Sam, find themselves enmeshed in a struggle that could prove deadly for both body and soul.

T.M. Doran spoke with Catholic World Report about The Lucifer Ego, his inspirations for the book, and how his new novel relates to Toward the Gleam.

CWR: What made you want to revisit the world of Toward the Gleam?

T.M. Doran: I didn’t want to, didn’t intend to, and resisted for years, until an idea came to me I couldn’t put away. On the surface, Toward the Gleam and The Lucifer Ego are similar: a combination of Graham Greene suspense/menace, Agatha Christie mystery, and Indiana Jones adventure, but The Lucifer Ego is an upside-down version of Toward the Gleam. Instead of trying to retain the manuscript, Lyle Stuart is trying to recover it; instead of trying to stay true to firmly held beliefs, Lyle’s beliefs are rocked and altered by events; instead of keeping family and friends close, Lyle is afraid of close relationships; instead of deep dives into big issues, the characters in The Lucifer Ego face difficult personal choices. The Lucifer Ego is a tightly wound ball of string, one thing on the surface, but something else as it’s unraveled.

T.M. Doran: The existential threats explored in Toward the Gleam are hovering over characters in The Lucifer Ego, but the focus of the new story is on how threats and weaknesses play out in individual lives. The modern day story is interspersed with flashback scenes that illuminate The Lucifer Ego characters, and reveal how characters and events in Toward the Gleam are still (even gravely) affecting people and events in the present day.

CWR: “John Hill”, the protagonist of Toward the Gleam, is a man deeply influenced by tradition, faith, and literature. He’s quite a contrast to the protagonist of The Lucifer Ego: Lyle Stuart, a man who is very much a modern academic. He doesn’t have much time for anything that can’t be explained in plausible terms relying upon current scientific theories. How do the ways the two men end up fighting the threats they face differ? How are they similar?

T.M. Doran: For the most part, the threats John Hill faces are external, while Lyle’s chief threats are internal, how he views the world and other people. He’s a world-renowned archaeologist, but his inner life is cramped, largely shaped by what happened to his parents and his subsequent resolution to believe only what can be observed and measured. Some have suggested that Lyle Stuart is the anti-John Hill, but I see him as a talented, flawed, and damaged man who yearns for more, but doesn’t know what more is. He’s starting to get it when he and his brother Sam invade a Mainz office and he “hears” his mother’s voice: “Shall we shoot,” said Faramir, turning quickly to Frodo—what Lyle does in response to this inspiration is a turning point.

CWR: Frodo Lyle Stuart may see himself as a man governed solely by rationality, but he also has some strong “pulls” toward a world view that sees beyond materialism: the memories of his mother and the book that inspired his and his brother’s names, as well as his friend Beatrice, whose experiences in Africa have shaped her response to the human condition. This emphasis on memory and past events shaping the future is a theme that is in all of your works. Can you elaborate on this?

T.M. Doran: Exploring how people play the hands they’re dealt in life, how their pasts affect them—what experiences guide them, and what they put aside; the weighty choices the characters in The Lucifer Ego face: Must I kill my best mate? Must I take a life to save my family? What shall I do in the aftermath of devastation? Shall I fight to keep the woman who calls me to a new way or shall I let her go? Shall I fully commit myself to my handicapped child or set him aside? Shall I deal death or mercy? You mentioned Beatrice, who is every bit as essential as Lyle. She has suffered as much as he has but it has made her bigger. As for Sam, a cipher, worthy of esteem one moment, terrifying the next. What will become of him? And the mysterious Rosman who pops up again and again, a foil to illuminate other characters, or something more?

CWR: The villains of Toward the Gleam and The Lucifer Ego are united in a desire to go beyond the limitations of the natural world, though it is expressed differently in the two books. How to you see that desire playing out in the world today?

T.M. Doran: The belief that length of years, physical vitality, and power are the only things that matter are temptations in every age. These stories depict characters with opportunities to take different paths, but consciously and willfully reject those opportunities. In The Lucifer Ego, I had to get deep inside one of these characters in a pivotal chapter, so I have an appreciation for how hard it was for C. S. Lewis to write The Screwtape Letters. I resisted until my editor pressed me, told me this chapter and perspective were essential, and it turned out to be one of the most powerful chapters in the book.

A word about cover art that can tell a powerful story too. Daniel Johnson’s cover for The Lucifer Ego is consciously evocative of John Herreid’s and Daniel Mitsui’s cover for Toward the Gleam, with features that differentiate the two stories. And for both books, there are obvious, or less obvious, connections between what’s visually depicted and the story itself.

CWR: You mention C.S. Lewis. Apart from him and the obvious influence of J.R.R. Tolkien, what other authors influence or inspire your work?

T.M. Doran: Too many to mention, if measured by every impressive story I’ve read! Some who have amazed me with the virtuosity of multiple novels and works are Graham Greene, Thornton Wilder, Evelyn Waugh, Flannery O’Connor, and Patrick O’Brian.

CWR: You’ve spoken before about your appreciation for the Twilight Zone television series. In many episodes, Rod Serling used the medium of television to explore various philosophical ideas in a dramatic way. Is this also an inspiration for you as well?

T.M. Doran: With my limited TV/film viewing, not so much anymore. Every once in a while I’m stunned by a film that captures The Twilight Zone spirit and verve. A Quiet Place comes to mind.

CWR: Thanks for talking with us. Are you working on any new novels at this time?

T.M. Doran: What inspired me to write The Lucifer Ego was a two-part idea. I have a rough draft of the second part, entitled Kataklusmós. I’m also having fun with a murder mystery where all the action takes place at the Detroit Zoo over a ten-day period. No humans murdered—animals. Right now, both just for fun and to satisfy a constant creative urge.

“The arts are languages of the soul”: An interview with Michael O’Brien

Iconographer, painter, and writer Michael O’Brien has been a unique creative force for decades. He is the popular author of several best-selling novels, including Father Elijah, Elijah in Jerusalem, The Father’s Tale, Eclipse of the Sun, Sophia House, Theophilos, The Fool […]

Short Histories – Nothing is certain in a country where the past is constantly rewritten, says Owen Matthews. The Russian enigma (The Spectator) Papal Infallibility – “A pope speaks ex cathedra when he presents some teaching […]