What do we love about mythology? The Greek word mythoi just means “stories,” and every culture has them, from the Mayans to the Mesopotamians. But these ancient stories continue to captivate us today, finding modern expression in works including the Percy Jackson series or the Marvel film franchise. Whatever else we might say about man, he is certainly a myth-making animal.

Myths make sense of the world, often explaining or symbolizing something in nature or in the human heart. So, the growing season ends every year because the goddess Ceres mourns for her kidnapped daughter Persephone. Likewise, anyone who has been madly in love can attest to the strong, unpredictable, irrational power of human attraction: so it makes sense that there’s a fickle and divinely beautiful goddess, Aphrodite, who governs love. The myths also offer moral lessons about human experience: “greed doesn’t satisfy” (King Midas), “humans have little control of our fate” (Oedipus), or even the highly practical “never try to trick the gods into being cannibals” (Tantalus). 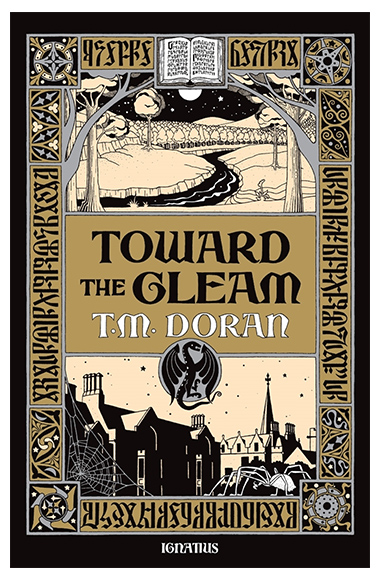 They’re not true stories, but they are archetypal truths about nature, psychology, and the longings of the human heart, told in a story form. But what if there were a myth that was also a historical fact? What if there were a true myth? This was the argument that J.R.R. Tolkien and Hugo Dyson used to convert C.S. Lewis to Christianity. As Lewis tells it in a letter, his friends showed him that

the story of Christ is simply a true myth: a myth working on us in the same way as the others, but with this tremendous difference that it really happened: and one must be content to accept it in the same way, remembering that it is God’s myth where the others are men’s myths.

In a sense, articulating this “true myth” of Christianity became the lifelong project of Lewis and Tolkien, giving us some of the best fiction of the twentieth century—The Chronicles of Narnia and the stories of Middle Earth.

T.M. Doran takes up this task and these same writers in his imaginatively-conceived novel Toward the Gleam, which takes as its startling premise that the Middle Earth stories might actually be true.

The hero is a slightly-altered J.R.R. Tolkien himself. Like Tolkien, Doran’s protagonist John is a veteran of the First World War, as well as an English university professor of philology and literature; like Tolkien, John meets his academic and literary friends (known as the Inklings) at a British pub called The Eagle and Child. His wife even has the same initials as Tolkien’s wife.

But unlike Tolkien, Doran’s protagonist discovers an unimaginably ancient manuscript in a space-age metal box. He begins to translate the unknown language, and finds that the manuscript tells the mythic history of a long-dead but highly advanced civilization. Soon he becomes obsessed with the translation project, and it takes a toll on his life and his family. But there are others who seek this artifact for themselves: the brilliant villain Adler Alembert wants to possess the technological and scientific secrets of this ancient culture. Soon the hero of Doran’s novel finds himself in a cat-and-mouse game to keep his manuscript a secret and protect his wife and children.

Toward the Gleam becomes a kind of intellectual adventure story, engaged with literature, history, science, and learning of all kinds. At times, it has what I call a bad case of good philosophy: characters who are total strangers meet in random places and immediately start arguing philosophical positions. Doran’s book isn’t the only Catholic novel to suffer these symptoms; plus, readers with a philosophical appetite can easily forgive some unrealistic dialogue for the sake of the meaty content.

Indeed, Doran understands that bad philosophies have big consequences: most of the novel takes place in the years of toxic ferment leading up to the Second World War. Nihilism, materialism, utilitarianism, nationalism: these are the poisonous ideas that will lead to the deaths of millions in the twentieth century. But Doran knows that these are just modern versions of very old sins; as one character puts it, “Pride, greed, and envy are the ancient credos.”

As the novel proceeds, John’s translation of the manuscript reveals just how advanced the people of this ancient civilization had become. They had sophisticated technology, cloning, and—it is hinted—even weapons of mass destruction: a cataclysmic event has nearly wiped all evidence of this culture from the face of the earth. As John and his friends watch the modern world hurtle toward a war that will eventually unleash the atomic bomb, the chronicle of this ancient civilization starts to look uncannily like the history of our own.

As a work of historical speculative fiction, part of the charm of Doran’s book is that he populates it with wonderfully real historical figures: J.R.R. Tolkien, C.S. Lewis, Edith Stein, Winston Churchill, Agatha Christie, and my personal favorite, G.K. Chesterton. Of the lovable giant, Chesterton, Doran writes one of the best lines in the book: “The room was smaller when he left it.” I never realized this before, but I’ve always wanted to read a novel with Chesterton as a character. Let there be more.

Finally, the mythic stories in the book that the protagonist names “the legendarium” tell a tale that will seem eerily familiar to modern Christians and to readers of Tolkien’s work. We learn of an ancient, powerful Traitor whose Voice manipulates men, a mysterious ring, the downfall of a once-glorious people through pride and greed. In Doran’s fictional portrayal, Tolkien’s brilliant Middle Earth tales have their origins in a real history—a history full of evil, sin, and death. But Doran and Tolkien know that those ancient evils, just like all the modern ones, can only be defeated by the True Myth of Christ.

May 25th is the feast day of St. Bede, who, perhaps after St. Gregory of Narek, would likely win the award for “least known doctor of the church,” of which there are a total of […]

Crypto-Monophysitism and the crisis in the Church today

Expectations for the ongoing Summit in Rome on sex abuse in the Church are rather low, not without good reason. Personally, I am not expecting much of the pope and bishops, and will not be […]

“Woman” undefined and the destruction of words (and sex)

Some weeks ago, as readers undoubtedly know, Supreme Court and Harvard educated nominee Judge Ketanji Brown Jackson, though a woman herself, pleaded a lack of expertise when asked to define the word “woman.” Ridicule resonated […]