The legendary Georgetown professor Fr. James V. Schall, S.J., who died last year, was known for packing an introduction to liberal education in each of his books. He would cover topics from Plato to Peanuts and give the reader not only much to think about, but leads to a dozen new authors and books, all in order to explain and illuminate the truths of human existence. 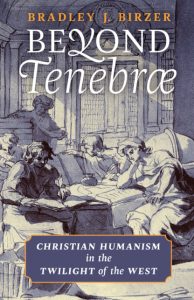 We may have our successor to Fr. Schall in Brad Birzer, himself a near-legendary writer and professor at Hillsdale College.  In Beyond Tenebrae, Birzer ranges widely across subjects and authors in defense of a truly human education. His style is similar to that of Schall as well: Birzer’s friendly, conversational writing brings you in, and his deep learning keeps you reading. It is as if you are hearing a friend talk about the great things he’s been reading and thinking about and wants you to share in the adventure.  These essays are autobiographical as well as analytical, so we see both the power of the ideas and how they affected Birzer as reader, scholar, and person. These essays cover writers from Ray Bradbury to Shirley Jackson, Russell Kirk to Friedrich Hayek, Willa Cather to Walter Miller, and are filled with suggestions for further reading.

His thesis is to present a case for humanism. Not the dreary bureaucratic secular ideologist of John Dewey but the romantic adventure of finding the rich tradition of Western, Christian reflection on human nature and our natural—and supernatural—ends. Birzer describes his humanism as unitive rather than divisive. In this, humanism is the opposite of contemporary university perspective on knowledge, which his deeply compartmentalized and rarely treats the human person as a whole being deserving of respect and oriented toward transcendence. And not only academic departments. As Birzer explains, each of the great, disastrous ideologies of our day—Nazism, fascism, Communism most obvious among them—refused to see the whole picture. Birzer focuses on three celebrated figures, and identifies their error:

For Marx, man is at heart economic. For Darwin, man is biological. For Freud, man is psychological. Each of these things is true. But man – a complexity and mystery even to himself – is all of these things and so much more. This is what twentieth and twenty-first century society continues to misunderstand, whether in the corrupt soul of some dictator in the East or in the labyrinth of a bureaucrat’s mind in the West.

Once reduced to a simple variable—biology, economics, psychology—the ideologists or bureaucrats then believe they have the key to transform human society to paradise. But not so fast. If the human person is an irreducible complexity of mystery and grace, then such efforts are bound to be destructive. And as Birzer notes, “not all things are solvable, and change that happens quickly usually only adds new problems …. real change requires time, laborious effort, fortitude and patience.” And any victory is not a triumph of ideology but should be recognized with humility.

Like the American critic and essayist Russell Kirk, one of his heroes who is mentioned throughout this volume, Birzer instead recovers a counter-genealogy of the humanist tradition. His response to the ideologies he identifies is the work of Tolkien and C.S. Lewis, Christopher Dawson and Nicolas Berdyaev, Friedrich Hayek and Ray Bradbury, Shirley Jackson and Margaret Atwood. These authors appreciate the complexity and mystery of human existence. His humanism is inextricably intertwined with his defense of the Christian tradition. Birzer says he is equally devoted to both. Writers such as Dawson, for example, called for a Republic of Letters across denominations to preserve classical learning and the Christian heritage of the West against the ideologies then emerging in the 1930s and 1940s.

Birzer spends several essays exploring a range of authors of dystopian literature, from Ray Bradbury to Walter Miller’s A Canticle for Leibowitz, and provides a crucial contribution to understanding this tradition. Too often such works are dismissed but Birzer is able to connect these books with the ideas in the larger tradition.

Birzer is a generous humanist, and his essay on Atwood is a wonderful example. Of course, Atwood is no Christian, and she is often associated with leftwing, progressive causes. But Birzer asks us to see her as a more complex figure, one who is opposed to the reductionist solutions of the ideologue, either left or right. Birzer sees her as perhaps our best dystopian novelist, who appreciates what she calls the “lumpiness” of humanity, which precludes any perfect world here on earth, imposed by government or other authority. Birzer fits her feminist concerns over unjust authority and genetic manipulation and control into his larger humanistic framework, so that both Atwood and C.S. Lewis can provide insight into the irreducible value of each human person.

Our current age is as threatening to true humanism as when the West was threatened by Communism or fascism. Our threats are of a piece: the attempt to reduce human complexity and mystery to simply objects that can be manipulated for political, technological, or materialistic ends. Birzer brings forth in this book a series of candles to resist that impending darkness.

Beyond Tenebrae: Christian Humanism in the Twilight of the West
By Bradley Birzer
Angelico Press, 2019
Paper/Cloth, 258 pages

Moral order, the current mess, and a theological reading of history

“As I explain in several essays in the book,” says George Weigel about The Fragility of Order: Catholic Reflections on Turbulent Times, “our politics are […]

Freedom of Opinion and Political Correctness: An interview with Cardinal Müller