Some years ago, while on retreat with the Passionists, I listened to a Korean priest describe how he came to America. As a young man in Seoul he had money, girlfriends, a cool car, and all the fun he wanted. As in the case of so many called to the religious life, he was missing something. The Something. After discernment he entered the Passionist Order—masters of the strategic retreat—in South Korea. Again, he felt something missing. He decided to study in America, away from the distractions of home. 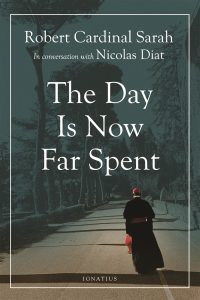 It seemed like a good idea at the time.

Alone, in the bustle of big city Chicago, and with little more than travel guide English, he wandered the busy streets wondering what he was doing there. Desperately homesick, he prayed. And in the holy lowness of his life, a quiet stirring revealed the answer.

He needed to need God.

At home he had everything. But the abundance impoverished his spirit, even as he was entering religious life. This was the mysterious, inarticulable reason he was led to a distant country. It is also the message of Cardinal Robert Sarah’s book The Day Is Now Far Spent. He speaks to all followers of Christ Crucified, but he carries a special message for the West: the hour is late. Invite Him to stay with you as darkness descends.

It is should come as no surprise to Christians in the West that our faith, firm and fervent it may be, is weighted down with abundance. Even in sickness and grief we are often insulated from the horrors our brothers and sisters suffer daily elsewhere in the world. Cardinal Sarah does not revile Western countries for our riches, he calls us to recognize our spiritual poverty. Life and death are set before us. He asks us—no, he admonishes us—to choose life.

Sarah echoes other voices of the age who warn both faithful and faithless: Aleksandr Solzhenitsyn, Romano Guardini, Benedict XVI. He speaks simply and clearly. One does not mistake his message; one has to ignore it. “We have abandoned prayer,” he says, and have given ourselves over to the “evil of efficient activism.” In this, his third book with Nicolas Diat, Cardinal Sarah speaks to us still as a loving pastor, one who emerged from the darkness of persecution in Africa, carrying fire that by his light we may see.

The darkness, as we know, has even taken hold of the Church. Sarah speaks of her with love and humility, but in the prophetic character of the Old Testament. “The Church is experiencing the dark night of the soul. The mystery of iniquity is enveloping and blinding her.” Plans and programs are the ephemeral hacks of an unserious age. Sarah, quoting Cardinal Ratzinger, calls for “holiness, not management.” Or, as George Bernanos has it, “The Church has need not of reformers but of saints.” We are called to love her too, and serve her, for she is “black but beautiful” and awaits the Bridegroom still.

But we must recognize, as Solzhenitsyn did, that “Men have forgotten God”; that, as Moses said, we are a “foolish and unwise people” that requite the Lord of faithfulness with infidelity. “What must change radically”, Cardinal Sarah warns, “is our relation to God.” We begin by resuming the posture of right relationship with our Creator. “Adoration is the greatest mark of man’s nobility” because it is evidence of our “astonishing intimacy with God.” A few quiet moments in contemplation of this reality overwhelms. We lower ourselves that He might raise us. Sarah describes it beautifully, saying “Man remains prostrate, literally crushed by the immense love that God has for him.”

This is the path of true freedom. If we prefer the path of Lucifer, we become the client kings of the Prince of the World, shackled and shamed. “In losing the sense of God,” Sarah tells us, “we have undermined the foundation of all human civilization and opened the door to totalitarian barbarity.” Stalin, Hitler, Mao, Pol Pot, and the rest—diabolical and deadly as they were—could not hide their hatred for life and man. The new totalitarianism, Sarah assures us, is far more subtle and therefore far more dangerous. The “chaos of desires” in which we live offers only the illusion of freedom. Not far beneath the surface are chains. Or in the mythical language of J.R.R. Tolkien:

One of the mechanisms of our enslavement encompasses all others. It is what Sarah calls the Utopia of Transparency. The Internet slithered its way into our lives, delivering freedom from the rodents of inconvenience and distance, only to slowly, imperceptibly constrict us. It is not merely the loss of privacy or discretion—this is bad enough—but the profound change in how life is lived that disturbs. The cultural emphasis on virtual rather than virtuous living, on social rather than inner lives, yields only glimpses of the horrors to come. The transparent society in which we now live, Sarah writes, “is equipped with dangerous instruments of control over its population. The political and financial powers seek to seize them in order to influence opinions.” Of his many warnings and observations, this is one of the most damning.

He is not alone. Korean-German philosopher Byung-Chul Han argues, “The omnipresent demand for transparency, which has reached the point of fetishism and totalization, goes back to a paradigm shift which cannot be restricted to the realm of politics and economics.” It is a titanic shift that has pornified society, not entirely or strictly in sexual terms but in the way we view one another. The mystery between the subject-viewer and the object-image—consider the reverence icons were once held in as against the “consuming” and “using” of digital images today—is removed. We do not reverence the image of Man as the Imago Dei, and so we do not reverence man. A world of stunning technological advancement has, as its signal achievement, demonic violence. And so “the regime of transparency,” Sarah says, “is a falsification of genuine liberty.” The Transparency Society as Han calls it, or the Utopia of Transparency as Sarah describes it, are one in the same with devastating results.

Another result in the wake of this shift is a flattening of cultural distinctiveness that has marked countries and kingdoms for millennia. Sarah denounces international elites who “dream of a world government that would rule peoples, cultures, and traditions that were formerly so different.” Far from being merely a negative social development, it has profound spiritual consequences. The leveling of cultural landscapes, leads to a destructive dislocation of the human person. Or as artist William L. Fox describes the effect of barren, visually monotonous places (e.g. deserts), the “cognitive dissonance of isotropic environments.”

The cultural disorientation that a person or a people feels following the dissolution or destruction of their culture—however quickly or slowly—leaves them susceptible to the concentration of power. And power, as opposed to natural authority, admits of no opposition. Thus, the “dream of the Westernized global elite,” Sarah warns, “is precisely to establish a new world religion.” It is, unsurprisingly, “a religion without God, without doctrine, and without moral teaching, a religion of consensus.” It is also, paradoxically, an anti-religion. For if Christianity transfigures, the anti-Christianity disfigures. It is precisely this disfigurement that is the mark of the Antichrist.

The frenetic pace of our life, the trivialities with which we are consumed, the grave injustices at which we merely shrug, originate in spiritual torpor. The demon of acedia stalk us, in our busyness and in our laziness, leaving behind the “exhilarating fumes of a deep sleep” that, Sarah says, has “made us lethargic.” If we are not awake, if we will not wait one hour with Jesus, we will wake to a nightmare. “The globalized elites want to create a new world, a new culture, new men, a new ethics.” Their effort is not in the nature of a continuum. “Rupture is the driving force of their political project.”

Cardinal Sarah is right to call our attention to acedia. For he knows even among the faithful there are many who know they need God, who know they need to need Him. And yet they cannot be bothered to seek Him. He simply isn’t worth the effort or the trouble. We must be roused, Sarah insists, into constant prayer, Eucharistic adoration, works of mercy and charity, and the utter awareness of our dependence on God. We ought also, he urges, find our way to a monastery. Contemplation is the lifeblood of monasticism and the heart of the Church. What better way to rejuvenate ourselves than to retreat into silence and prayer? Throughout the book, Sarah’s deep love for the men and woman hidden in Christ encourages us to seek them out, so as to experience Him in their midst. “The renewal,” he declares, “will come from the monasteries.”

This book, like God or Nothing and The Power of Silence, is structured in interview format of question and answer. At times Sarah develops an argument, other times he speaks aphoristically, and in others he adopts a homiletic approach. He ranges far and wide, in things spiritual and secular, in the concerns of time and eternity. But he is never confusing, incoherent, or inconsistent. It is like walking with a man who has seen much, knows more, and believes all that is revealed in Christ. He alarms us, but he also arms us. He is a good shepherd.

“The path of truth will lead us to enormous sufferings.” Yet it is truth that frees us. So we go forth in darkness, with Cardinal Robert Sarah up ahead, torch in hand. The world can kill us but it cannot harm us. The day is indeed far spent but we need not worry, for “the dark night of this world is still beautiful,” Sarah says, “because God exists.”

Archbishop Gomez: Gospel is the answer to the ‘new religion’ of secularism

Washington D.C., Apr 15, 2021 / 10:21 am (CNA).
True social justice is rooted in the Gospel and not in a secular materialist vision, Archbishop Jose Gomez of Los Angeles told Catholic activists on Thursday.“We are followers of … […]

One year ago, Pope Francis encouraged an estimated two million young pilgrims gathered outside Krakow, Poland from all corners of the world to “get off the couch” and begin their adult lives as brave, tenacious […]