It is unfortunate, even tragic, that Father Paul Mankowski, S.J., is not known to many, as he was a true intellectual giant, a bulwark of Catholic orthodoxy, and a writer with a remarkable gift for clearly communicating complex ideas in straightforward ways.

Paul Mankowski was born November 15, 1953, in South Bend Indiana. His academic prowess was obvious at an early age, and he earned degrees in Classics and Philosophy from the University of Chicago, in classics from Oxford University, in Sacred Theology from Weston Jesuit School of Theology, and in Comparative Semitic Philology from Harvard University. He taught at Xavier University, and for many years at the Pontifical Biblical Institute in Rome, and later at the University of Chicago. 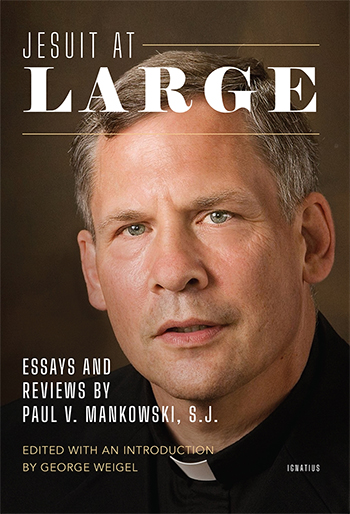 He was not merely a bookish recluse. Quite the contrary. He worked in the steel mills to pay for his studies. And boxing was a favorite hobby.

Father Mankowski was a voracious reader and a prolific reader. One of those men who seemed to be well-versed and educated on just about every subject, he could speak and write articulately and genuinely educate his audience in all sorts of contexts. Yet, as Cardinal George Pell noted in a tribute, he “lived his life in obscurity…”

After his untimely death in September 2020 from a brain aneurysm, his friends sought to spread awareness of this holy priest and his writings.

Many of these writings were compiled in the recent book, Jesuit at Large: Essays and Review by Paul Mankowski, S.J. (Ignatius Press, 2021). George Weigel served as editor of the collection. Weigel will, of course, be familiar to CWR readers. Probably best known for his monumental biography of St. John Paul II – Witness to Hope and its follow-up The End and the Beginning – he was also a dear friend of Father Mankowski.

The book has been widely praised. “Father Paul Mankowski was a priest with the soul of a boxer,” says Mary Eberstadt, “and a boxer with the soul of a priest.” Father Mankowski, remarks Peter Kreeft, “is our John the Baptist” whose writings are “very reminiscent of the writings of Chesterton, Belloc, Lewis.”

And Tony Abbott, former Prime Minister of Australia, says, “I will read and reread these essays as a magisterial lesson on the strengths and weaknesses of the contemporary Church, as a magnificent affirmation of faith in the face of pain and doubt, and above all as an act of homage to a friend whose inspiration I cherish and whose company I always miss. The world should come to know better this incomparable man.”

George Weigel recently spoke with Catholic World Report about the book and the tremendous influence of Father Mankowski.

Catholic World Report: How did this book come about, and how did you come to be its editor?

George Weigel: Shortly after Father Mankowski’s unexpected death on September 3, 2020, the idea came to me that his writing ought to be anthologized.

I proposed such a book to my friends at Ignatius Press, offering to serve as editor and to introduce the collection with a biographical essay about my friend, and they agreed.

CWR: Why should anybody care about or read Father Mankowski, as opposed to some other writer?

Weigel: Father Mankowski was brilliant, witty, 120% Catholic, and utterly fearless. Anyone like that deserves to be read, not least in a season of political correctness.

CWR: For such an intellectual giant, Father Mankowski was not nearly as well-known during his life as many of his Jesuit confreres. Why do you think that is?

Weigel: Because the mainstream media is far more interested in the man-bites-dog story of the dissident or radical Jesuit than the story of the man who lives out what St. Ignatius Loyola intended the Society of Jesus to be and do.

CWR: How did you come to know Father Mankowski? Had you read him before you met him?

Weigel: We met over thirty years ago, through the First Things network, and quickly became good friends. I can’t recall reading him before meeting him, but perhaps I did. In any event, once we met, I read him with the keenest appreciation.

CWR: Did he ever have run-ins with his Jesuit superiors or confreres?

Weigel: As I indicate in my introduction to Jesuit at Large, the central drama of Father Mankowski’s life was his relationship with the Society to which he pledged himself as a young man.

The past sixty years have not been easy ones in the Society, and Mankowski’s story embodied many of the tensions and controversies of Jesuit life. Yet he never imagined himself as anything other than a Jesuit, even when being one cost him a great deal.

CWR: Father Richard John Neuhaus called him a “papal bull”, a Jesuit of intellectual sophistication and unwavering orthodoxy. How did Father Mankowski fit this description?

Weigel: The “papal bulls” was a Neuhausian moniker for post-Vatican II Jesuits who boldly defended and brilliantly explicated the teaching of John Paul II, whom these Jesuits deeply admired. Father Mankowski wasn’t the only “papal bull” of this sort, but his combination of laser-like intelligence, courage in controversy, and literary style made him, if you will, the most bullish of Neuhaus’s “papal bulls.”

CWR: Father Mankowski taught at the Pontifical Biblical Institute for many years. Did Scripture play an important role in his thought and writing?

Weigel: Father Mankowski was a specialist in ancient Near Eastern languages, not a professional exegete, but he loved the Bible and could bring a deep knowledge of languages, cultures and history to understanding the texts of Scripture. Thus when Jewish scholar Leon Kass was teaching the book of Genesis at the Pontifical Gregorian University he asked Father Mankowski to sit in on his classes as a kind of amicus curiae in Near Eastern languages and literature, which made for a marvelous classroom experience by the testimony of everyone there.

Weigel: Father Paul Mankowski was an exceptionally honest man, who lived by the conviction that the truth—no matter how difficult to bear—liberates us in the deepest meaning of human freedom.

In that sense, this man who placed himself under obedience to religious superiors for decades, not without considerable cost, was one of the freest men I have ever met.

About Paul Senz 109 Articles
Paul Senz has an undergraduate degree from the University of Portland in music and theology and earned a Master of Arts in Pastoral Ministry from the same university. He has contributed to Catholic World Report, Our Sunday Visitor Newsweekly, The Priest Magazine, National Catholic Register, Catholic Herald, and other outlets. Paul lives in Elk City, OK, with his wife and their four children.

Pope Francis: Halving of Jesuit numbers worldwide is a lesson in humility

Being Frank about Francis

The McCarrick scandal, let us all admit, is just one powerful gust in the swirling tempest that now surrounds Francis and threatens to capsize both […]

Not Forgotten aims to encourage readers in leading a worthy life

For a society aptly described by Pope St. John Paul II as the “Culture of Death”, most of us are not very comfortable facing mortality. However, as the old saying goes, death is one of […]