It’s hard to imagine that anyone who ever raised children found it an entirely easy job. Challenging, exciting, often rewarding–yes. But easy? You’ve got to be kidding.

That is certainly the case when it comes to religion. Yet as Christian Smith and Amy Adamczyk report in their important new book Handing Down the Faith (Oxford), “Above and beyond any other effect on children’s religion is the influence of their parents.” 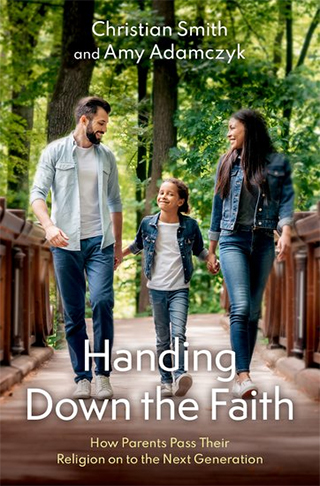 By no means does that mean that what parents do will be an absolute guarantee of either success or failure. The children of religiously conscientious parents sometimes turn out to be unbelieving rascals, while religiously careless parents now and then raise offspring who become saints.

But making ample allowance for the many exceptions, it appears to be generally true that parents who are lax in their faith turn out kids who then prove even laxer. As Stephen Bullivant says in his illuminating analysis of Catholic “disaffiliation” in America and Great Britain Mass Exodus (Oxford), there is a clear link between the seepage from the Church occurring in recent decades and the fact that the “Catholic” upbringing of many of those who took leave of the faith was “very weak or nominal.”

Data provided by sociologists Smith and Adamczyk (he teaches at Notre Dame, she at the John Jay College of Criminal Justice and the City University of New York) shed further light on what that means.

In one major study, for instance, only a dismaying 17% of Catholic parents and mainline Protestants said it was “very important or essential” that their children have strong religious faith. The rest presumably communicated laissez-faire indifference about religion to their kids–with painful but eminently predictable results.

Other figures shed further light on the parental influence on children’s religious decisions. Among the Catholics, 63% agreed either “strongly” or “somewhat” that the choice of a religion–or of no religion, if that is the case–should be left up entirely to the children, with only 37% holding that parents ought to encourage offspring to accept their own faith.

So why do young people raised in nominally Catholic homes end up leaving the Church? There are plenty of factors at work here, so that what parents do or fail to do is not the total explanation. But as figures like these suggest, the parental role in producing a negative outcome can hardly be ignored.

What, then, can Catholic parents eager to pass on the faith to their children do to make that happen? I repeat: in the nature of things, there is and there can be no 100% foolproof formula for success. And that’s especially true today, when popular culture throws so many roadblocks in the way of responsible parenting. In general terms, however, two modest suggestions by Smith and Adamczyk near the end of their book make good sense.

The first is that, besides practicing the faith themselves, parents talk to their children about it. “If there were only one practical take-away from our research,” the authors write, “it would be this: parents need not only to ‘walk the walk’ but also regularly to talk with their children about their walk, what it means, why it matters, why they care.”

The second suggestion is that parents practice a “general authoritative” parenting style. “Combining clear and implemented life standards and expectations for their children with expressive emotional warmth and relational bonding with their children fosters relationships that most enhance effective religious transmission,” Smith and Adamczyk say.

About Russell Shaw 259 Articles
Russell Shaw was secretary for public affairs of the National Conference of Catholic Bishops/United States Catholic Conference from 1969 to 1987. He is the author of 20 books, including Nothing to Hide, American Church: The Remarkable Rise, Meteoric Fall, and Uncertain Future of Catholicism in America, Eight Popes and the Crisis of Modernity, and, most recently, The Life of Jesus Christ (Our Sunday Visitor, 2021).

The media vs. reality when it comes to Eucharistic consistency

Have you ever read or heard a news account of an event that you know something about and found it to bear little or no resemblance to what happened? That was the case for me […] null / “The World of Marian Apparitions: Mary’s Appearances and Messages from Fatima to Today”

Sophia Institute Press and Polish theologian Wincenty Laszewski have successfully completed the task of creating the most ambitious, graphic-rich and beautifully printed compilation of Marian apparitions to date.

In its colorful 405 pages, “The World of Marian Apparitions: Mary’s Appearances and Messages from Fatima to Today” immerses the reader in occasions in which the Virgin Mary either authoritatively or probably has shown signs of her presence and her love for us.

Adam Blai, the author of “The Catholic Guide to Miracles: Separating the Authentic from the Counterfeit” (Sophia Institute Press, 2021), sets the theological stage for the unique experience provided by the pictures, graphics and testimonies that Laszewski has curated with great care.

Blai explains that Marian apparitions generally include four components: the visionary, the experience, the message, and the miracles.

“But within this framework, there has been a wide variety,” he writes.

“The messages are almost always centered on prayer and repentance, but sometimes they include dire warnings for the world. The accompanying miracles vary widely, from enduring images to onetime spectacles, but they are almost always testable by outside experts, so the Church and the world have some proof that something extraordinary happened.”

Blai provides a key to understand some of the Marian messages included in the book, such as the possible apparition of Trevignano Romano in Italy in 2019, in which the Virgin Mary is said to have warned: “Pray for China, because new diseases will come from there.”

“What most people do not know is that, although only a handful of apparitions have been officially approved — ten by local bishops and sixteen by Rome in some way — there have been hundreds of accounts of Marian apparitions down through the centuries,” Blai explains.

“Sometimes the supposed apparitions generated some local interest, but no investigation was undertaken; sometimes there has been disagreement between diocesan and Vatican authorities.”

The ongoing case of Medjugorje, in Bosnia-Herzegovina, from 1981 to today is a complicated version of this latter case, explains Blai.

“As of 2020, Rome has approved pilgrimages to the site, but final full approval has been withheld until the apparent visions conclude and the case can be studied in its entirety,” Blai writes.

Laszewski and the editors carefully navigate this complex reality and provide the images and the facts, using a cautious, conditional presentation when necessary. Thus, the book includes a visible legend next to each of the 48 reported apparitions, based on nine different qualifications, ranging from “A revelation recognized by the Vatican” to “A revelation accepted by the belief of pilgrims.”

This beautiful book can be read and reread with true spiritual freedom. In the process, you are sure to find many gems, as I found in this statement attributed to the Blessed Mother: “I feel in my heart — and it fills me with great sorrow — with what falsity and hypocrisy the holy Rosary is recited. Prayer cannot be a careless tune. It has to be sweet music flowing from the heart.”