One of the healthiest manifestations of a healthy culture is the existence of book clubs. The gathering of kindred spirits, preferably round the hearth or at least in the flesh, to discuss worthy tomes, both old and new, is a sign of a vibrant and intellectually vigorous community. Although, as a resolute and dyed-in-the-wool techno-minimalist, I would always advocate these traditional gatherings over their techno-equivalents, there is a place in our day and age, and especially in these covidious times, for online events and activities, including online book clubs.

It is, therefore, with great pleasure that I have enjoyed getting together every week with Father Joseph Fessio, S.J., and Vivian Dudro of Ignatius Press to record sessions of the FORMED Book Club. We’ve been doing this for a couple of years now and we’ve discussed many great books. The current title we’re discussing is Real Philosophy for Real People: Tools for Truthful Living by Father Robert McTeigue, S.J. 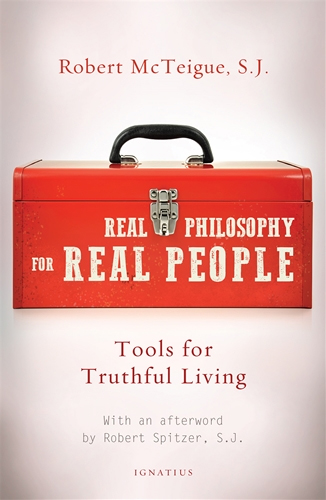 I’ve known Fr. McTeigue for many years. We were on the faculty together at Ave Maria University. We got on well, not least due to our shared delight in single malt whiskies and small batch bourbons, which were enjoyed in the Queen Mary pub on the edge of campus. Time rolls on and both of us rolled with it, in different directions; or, rather, not in different directions in terms of our shared theology and philosophy, and love of good literature, but in terms of our geographical locations. In this sense, it has been a blessing to spend some time with him, albeit vicariously, discussing his latest book.

One thing that has struck me in the reading of Fr. McTeigue’s book is how much I wish I could have been the proverbial fly on the wall in one of his classes at Ave Maria University. This desire has been kindled by Fr. McTeigue’s offering of anecdotal examples from his experience with his students as a means of illustrating the more abstract philosophical points he is making. The scene is set in this respect by a “parable” at the beginning of the book, which sets the scene and the tone for what follows. It is a dialogue between “Al” and “Fred” on the nature and meaning of morality. It concludes with Al asking whether Fred is saying that morality is meaningless. This is Fred’s response:

Certainly philosophical accounts of morality, in light of the antinomies I’ve just listed, are meaningless. The history of philosophical moral reflection is a collection of quaint and embarrassing conceits. A systematic, coherent account of the moral life just can’t be achieved. If you want guidance in morality, just ask yourself before acting, ‘What is the loving thing to do?’ That is about as reliable as any other attempt as a moral theory, and it is a lot more concise.

Then comes Fr. McTeigue’s essay prompt: How should Al respond to Fred?

Having read this introductory “parable”, I wrote “blarney” in the margin of my copy of the book. It was meant as a compliment, an affectionate nod of deference to Fr. McTeigue’s Irish ancestry and the manner in which I had heard him use the gift of the gab in his homilies. This blarney would characterize the rest of the book, in which Fr. McTeigue sets out, in persona Al, to respond to Fred.

Reminding ourselves that blarney, according to no less of an authority than almighty Google, is “talk that aims to charm, pleasantly flatter, or persuade”, we could say that Fr. McTeigue aims to persuade us charmingly and succeeds in doing so. If flattery is any part of his charm, it is that flattery which aims to persuade and emphatically not that which aims to deceive. Take, for instance, his charming employment of the words of Saint Thomas Aquinas to connect the poet with the philosopher: “Now the reason why the philosopher is compared to the poet is that both are concerned with wonders. For the myths with which the poets deal are composed of wonders, and the philosophers themselves are moved to philosophize as a result of wonder.”

The most endearing aspects of Fr. McTeigue’s persuasive art are the anecdotal jewels, set within the crown of his rhetoric, especially those jewels that have been mined from his experience in the classroom. There is the story of his being asked by the teacher of an eighth-grade class to explain to her students why freedom should not be equated with license and why “real freedom” is not getting to do whatever we want, with no one having the right to tell us otherwise.

Fr. McTeigue entered the classroom and asked two young ladies in the front row if he could examine their eyeglasses. The ladies having handed them their glasses, he then informed the class: “These glasses are mine now. I am using my freedom to declare them mine. I have not ‘stolen’ them; I have merely relocated them.” He then reminded the girls that he was bigger than they are and that he would use his freedom to retain possession of the eyeglasses by force, if needed. He then asked the class whether they wanted to live in a world “wherein this sort of thing will happen to you every day for the rest of your lives”. If not, he suggested, they had better look for a better definition of freedom.

Fr. McTeigue is as good at hammering home the point to his undergraduate students as he is to eighth-graders. Take, for instance, this “accurate account of a conversation I had with a student”:

STUDENT: I’m convinced that there is no significant difference between a human person and any other kind of animal. And I wanted you to be the first to know.

And the point, which he hoped the student had grasped, is that “there are some questions we simply cannot afford to get wrong, and among them is: ‘What is a human?’”

Inviting us once again to be the fortunate fly-on-the-wall in one of his classes, he explains that students in the front row of his classes “become my props to illustrate philosophical points”. He then recounts his words to his students: “Suppose I whacked George here in the forehead,” he begins, taking a swipe at George. “What would you think if, after doing so, I looked at my hand and said, ‘I wonder why the atoms of that hand did that? Why would the atoms of that hand want to hit George?’”

Is there a better way of illustrating the absurdity of materialism?

Fr. McTeigue has the gift of the gab. His “talk aims to charm, or persuade”. His pedagogy is blarney at its purest and best. It is the use of reason to exorcise the forked tongue of deceit. It banishes the sophistry of the serpent with the wisdom of the saint. Saint Patrick would indubitably approve.

One of the most depressing things about modern Britain is the lack of awareness of the country’s Christian past. Christian faith has been effectively exiled from public life. Yet the Christian, and specifically Catholic, heritage […]

St. Patrick’s Day is broken. We need to remake it.

“They called out as it were with one voice: ‘We beg you, holy boy, to come and walk again among us.’ This touched my heart deeply, and I could not read any further; I woke […]