Strange things were demanded of many young Evangelicals in the twentieth century. Perhaps topping the list were the exhortations to question, criticize, and even ridicule evolutionary science, which, we were told, represented a direct assault on God and the Bible. I remember my youth group leader telling a teenager-packed room that the duckbill platypus presented comic, irresolvable problems for evolutionary biology. We were schooled in the scientific skepticism of Creation Museum founder Ken Ham (don’t trust that carbon-14 dating!). Later we learned impressive phrases such as anthropic principle and irreducible complexity to stump our interlocutors. 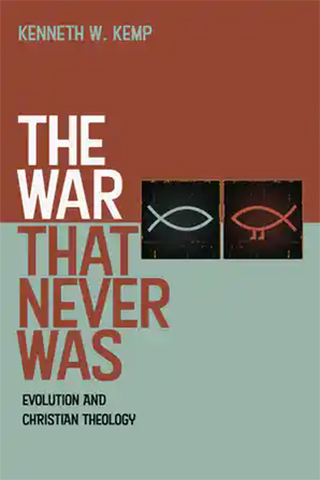 The War That Never Was: Evolution and Christian Theology, by Catholic philosopher Kenneth W. Kemp, charts the recent history and arguments that brought about this peculiar paradigm, in which many in the West came to view science and religion as diametrically opposed. As Kemp skillfully argues, much of this conflict has more to do with scientists and the faithful overstepping their respective authority or expertise, by believing that science (or the Bible) answer questions they are not capable of answering. He writes:

An example of this overstepping is manifested in University of Chicago biologist Jerry A. Coyne’s claim that, “evolution gives us the true account of our origins, replacing the myths that satisfied us for thousands of years.” Cornell historian of biology William B. Provine was even more sensational, claiming that Charles Darwin understood that if natural selection were true, “then the argument from design was dead and all that went with it, namely the existence of personal god, free will, life after death, immutable moral laws, and ultimate meaning in life.” Atheist and evolutionary biologist Richard Dawkins in turn has called religious catechesis of one’s children a form of “child abuse,” because science disproves God’s existence.

Such attacks have led many Christians, particularly those of a fundamentalist stripe, to resist what they perceive as the immediate threat: evolutionary science. Yet this was always misguided, because the attacks on faith, though often made by scientists, were not actually scientific. If God is immaterial and transcendent, as Christians have historically claimed, no purely materialist intellectual endeavor, regardless of its complexity or nuance, can disprove him. The same is true for the human soul and its powers of intellect and will — if they are immaterial, no biological research can demonstrate they don’t exist. The existence (or non-existence) of God and free will are philosophical questions, not biological ones.

Moreover, as Kemp explains, the history of the battle between evolution and Christianity is not as binary or Manichean as it is typically presented in such popular accounts as the 1955 play Inherit the Wind, which tells the story of the famous 1925 Scopes “Monkey Trial.” Take for example the famous 1860 Oxford evolution debate, now an integral part of the mythology of anti-religion evolutionists who posit a “science v. religion” war. As “Darwin’s bulldog” Thomas Huxley later admitted, “the supporters of Mr. Darwin’s views in 1860 were numerically extremely insignificant. There is not the slightest doubt that, if a general council of the Church scientific had been held at that time, we should have been condemned by an overwhelming majority.”

Indeed, whether we consider biology or other “hard” sciences, resistance to new ideas comes just as much, if not more from within the scientific community itself than it does from pious believers. Kemp writes: “Even among scientists, there is always controversy between those eager to embrace new ideas and those appreciative of the power of the old ideas and doubtful of the values of the new.” Nor is science as monolithic as many of its anti-religion proponents like to claim. Consensus among the experts often takes a long time to coalesce, and, as any student of the history of science knows, is sometimes upended by new research or ideas.

Moreover, since Darwin’s 1859 On the Origin of the Species, plenty of Christians, including prominent theologians and philosophers, have been sympathetic toward, if not explicitly supportive of, many Darwinian ideas. The Southern Presbyterian Church, the locus of a famous controversy over evolution in the late nineteenth century, was a battle between theologians over evolution’s merits. During William Jennings Bryan’s misguided early twentieth century crusade against evolution, many scientists, such as Asa Gray, James Woodrow, and William Louis Poteat embraced evolution while remaining devout Protestants. They could do so because there remain many unresolved debates among Christians over the proper interpretation of Genesis.

Of course, the blame for invigorating this pseudo-war lies not only with fundamentalists like Bryan but also with anti-religion polemicists like Huxley or Andrew Dickson White. Many scientists, and even journalists including H.L Mencken, have eagerly sought to exploit various scientific theories to undermine Christian faith. Ella Thea Smith’s popular 1950s textbook Exploring Biology at times veered away from science by ridiculing those who believe humans to be the most evolved mammals. The National Science Foundation’s 1960’s Man: A Course of Study was widely interpreted as claiming that morality is solely a “product of our culture.”

More recently, an unnamed textbook cited by the California Board of Education in 1972 claimed “science is the total knowledge of facts and principles that govern our lives, the world, and everything in it.” A 1995 statement by the National Association of Biology Teachers, in turn, defined evolution as necessarily incompatible with the idea of design supervision or a personal God. With such unscientific assertions being peddled as incontestable truth, it’s understandable why American Protestants often felt the need to fight back.

One of the more recent manifestations of this resistance has been the Intelligent Design movement, promoted by people including Catholic biochemist Michael J. Behe, evangelical mathematician William A. Dembski, and evangelical UC Berkeley law professor Phillip E. Johnson. Though more intellectually nuanced than the fundamentalist-led biblical creationism, it sometimes suffers from similar weaknesses by proposing theses that science simply cannot prove.

Take irreducible complexity, an idea popularized by Behe, which proposes that some organisms are so irreducibly complex that they could not possibly evolve on their own without some sort of intelligent intervention. In response, Kemp notes that we lack sufficient knowledge of structures and processes to make the kinds of claims Behe makes. He cites as one example the human blood-clotting cascade, noting that even Behe has acknowledged, “it’s often quite difficult to sort out just who is activating whom.” Other structures and processes, alternatively, we actually do know enough to recognize them as not irreducibly complex—the blood-clotting cascade is more complex than bare functionality requires, evidenced by the fact that parahemophiliacs who lack one of the enzymes involved in the cascade can live long lives without out, and that whales and other sea creatures also lack parts of it . Finally, many evolutionists have offered a reasonable account of how Darwinian processes can produce irreducible complexity—for example, such a system can be built gradually by adding parts that are initially only advantageous, but eventually become essential. Indeed, Richard H. Thornhill and David W. Usserty have distinguished two “routes” of Darwinian evolution that they argue can produce the precise kind of complexity that Behe claims is beyond the reach of Darwinian processes.

Perhaps, then, it’s best if Christians take their lead from the many philosophers, theologians, and scientists who argue that there really need be no conflict between religious faith and evolutionary science, and that what conflict do exist are often because evolution has been exploited to make assertions beyond its own area of knowledge. Doing otherwise, as many well-intentioned Christians have done in recent centuries, has perhaps done more harm than good. St. Augustine puts it well when he writes:

If [non-Christians] find a Christian mistaken in a field that they themselves know well and hear him maintaining foolish opinions about our books, how are they going to believe those books concerning the resurrection of the dead, the hope of eternal life and the kingdom of heaven, when they think that their pages are full of falsehoods on facts which they themselves have learnt from experience and the light of reason?

One can only guess how many people have rejected Christianity because it was presented to them as synonymous with an anti-intellectual, anti-evolutionary fundamentalism.

For Catholics, the “Warfare Thesis,” as Kemp calls it, is especially misleading and erroneous. Many Catholics since the second century have believed that the Hexaëmeron, or six days of creation described in Genesis 1, are not temporal days. St. Augustine, St. Albert the Great, and Tommaso de Vio, Cardinal Cajetan all believed as much, long before Darwin’s famous voyage on the Beagle. As historians Rodney Stark and William J. Slattery have argued in their recent respective books Bearing False Witness: Debunking Centuries of Anti-Catholic History and Heroism and Genius: How Catholic Priests Helped Build — and Can Help Rebuild Western Civilization, the Catholic Church has always been supportive of science.

Indeed, the scientific method itself originated in a Christian philosophical system, practiced by Catholic clergy who believed the natural world was predictable and knowable because it was created by a rational God. Many of the earliest scientists were not only men of faith, but men of the cloth (e.g. Gregor Mendel). English biologist and Catholic St. George Mivart, who wrote an account of the intersection of theology and evolutionary biology, was in 1876 awarded an honorary doctorate by Pope Pius IX. And the big bang theory was first proposed by Belgian physics professor Msgr. Georges Lemaître. For anyone who still believes in this pseudo-war, or knows someone who does and needs persuading otherwise, Kemp’s book is essential reading.

The War That Never Was: Evolution and Christian Theology
By Kenneth W. Kemp
Wipf and Stock Publishers, 2020
234 pages

Love, Loss, and “The Confessions of X”

St. Augustine of Hippo knew firsthand the agony of a broken heart. His account of sending away his faithful concubine sears the pages of his famous autobiography, the Confessions. He writes that the woman with […]

A scientist explains how God made Earth mankind’s home

What a convincing lie the Enlightenment spread. The world was suddenly divided into two: the realm of faith and the realm of reason. The small gap between these realms became a chasm in the hands […]