You have to wait until the very last paragraph of Joe Heschmeyer’s new book Pope Peter: Defending the Church’s Most Distinctive Doctrine in a Time of Crisis to get his opinion of our current pope and our Church hierarchy. But in the end he’s not afraid to hold back. “The church right now is going through a period of crisis at least in part because of bad papal and episcopal leadership,” Heschmeyer writes. The Church, he acknowledges, “is going through the roughest patch it’s seen in centuries. Pretending otherwise is dishonest.” 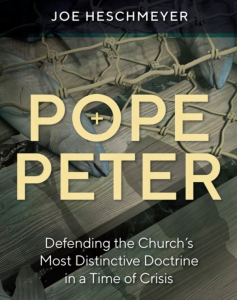 Certainly, recent events regarding Pope Francis give further ammunition to this analysis. His latest encyclical Fratelli Tutti has been derided as full of dubious claims, strawmen, superficiality, and empty platitudes. His comments regarding same-sex unions, regardless of their true context and intention, have been trumpeted so victoriously by a zealously pro-LGBTQ media that it has already persuaded many that the Church has changed its teaching on sexuality. All the more timely is the former seminarian Heschmeyer’s book, which defends Petrine and Roman primacy with a mix of well-trod apologetic arguments and some clever, well-substantiated insights.

Heschmeyer starts by pinpointing the true locus of debates between Protestants and Catholics: authority.

When a theological dispute comes before the courtroom of our mind, we would do well to ask…. Is the theological question at hand something each individual Christian is called to sort out for himself, or is there a higher authority that can settle these questions?

This is right. If the Catholic Church is who she claims to be, namely, Christ’s representative on earth, then our individual objections to her doctrines are wrong, even if we don’t realize why they’re wrong.

Thus, Heschmeyer argues, “the question we ought to be asking is not ‘Can I find scriptural support for all of these Catholic teachings?’ but ‘Is the Catholic Church what it claims to be?’” If the answer to the latter question is “yes,” then our personal qualms with her dogmas are irrelevant. As Christians, we don’t obey the Bible because we agree with it, but because it has divine approbation. The same would be true for Rome, if her authority is legitimate.

In making the Catholic case, Heschmeyer often performs a clever rhetorical move: he identifies Protestant theologians, scholars, and pastors who have articulated biblical interpretations or theological claims that support the Catholic position. For example, he cites Methodist minister Joseph Benson and Presbyterian theologian Hans Bayer as offering interpretations of the “keys to the kingdom” granted to Peter in Matthew 16:19 that correlate with the dominant Catholic interpretation. He quotes Reformed theologian Richard Gamble to support his argument that Jesus’s description of a “city on a hill” is intended to be a metaphor for the visible Church. He refers to respected Anglican scholar R.T. France, who concludes that Peter is indeed the “rock” of Matthew 16:18. Heschmeyer at times even makes effective use of Calvin and Luther.

Much of what Heschmeyer accomplishes in this book is a re-treading of the same ground covered by many other very capable Catholic apologists. Not that there’s anything particular wrong that — if an argument or apologetic is a good one, it’s worth being recycled. For example, he cites Peter Kreeft’s perceptive claim that Protestantism looks and acts like a group of Christians creating their own church “as a way of honoring Christ, rather than what we would expect to see if Christ had built his own church.”

Again, he argues that Peter is at the heart of all of Jesus’ three miracles involving the multiplication of fish. He notes that Peter is constantly described as a leader or first of the Apostles, appearing first in various biblical lists of the Apostles. He explains how in the famous, widely contested verses in Matthew 16 regarding Peter and “the rock,” Jesus specifically addresses Simon Peter “at least ten distinct times” in three verses. He notes that when Christ gives the “keys to the kingdom” to Peter in Matthew 16:19, there is a direct correlation to King Hezekiah naming Eliakim son of Hilkiah as his representative in Isaiah 22:15-23. The fact that I have read most of these many years ago makes them no less valuable.

As for something I hadn’t heard before, how about Heschmeyer’s interpretation of Jesus’ statement in Luke 22:31-32: “Simon, Simon, behold, Satan demanded to have you, that he might sift you like wheat, but I have prayed for you that your faith may not fail; and when you have turned again, strengthen your brethren.” Heschmeyer explains that the first “you” is a you-plural, meaning the Apostles, while the second “you” is a you-singular directed solely at Peter. In other words, Peter is being given a unique role to guide and help his fellow Apostles.

Another fun one is the author’s exegesis of Matthew 17:24-27, the miracle of the fish with two coins in it to pay the Jewish temple tax. Heschmeyer first notes that “the only two men referred to in the New Testament as petra and skandalon” are Jesus and Peter. But more fascinating still is the argument that Jesus’s claim that both he and Peter are exempt from the Temple tax is because they are both uniquely sons of the Temple, “that is, priests.” As the New Testament evidence mounts, it becomes increasingly untenable to claim Peter doesn’t have a special role.

One complaint I do have with Heschmeyer’s approach is his tendency to play into Protestant hands by presuming their doctrine of perspicuity, or clarity, that teaches that all Christians should be able to interpret the Bible’s plain meaning. The author employs phrases like: “On this point, Scripture clearly sides with Bellarmine;” or “Paul is clearly not describing the wholesale replacement of one covenant people with another…”; or “It’s worth noting that the New Testament clearly presupposes unity in truth.” The problem with this is that it grants too much ground to Protestants by seeming to grant that Scripture is clear, when 500 years of Protestant ecclesial splintering and theological divisions demonstrates it decidedly is nothing of the sort.

Recounting debates over the meaning over certain Greek words in the New Testament, Heschmyer writes: “At this point, you may well be frustrated. With scholars saying opposite things about first-century Greek, how can a reader who doesn’t know ancient Greek possibly know which side to believe in his debate?” Yet the more essential lesson to be learned from such exercises in futility is that if even intimate knowledge of Koine Greek can’t resolve disputes over the Bible, perhaps it is not actually clear. It’s certainly not in the sense that many Protestants intend.

Frankly, I wish Catholic apologists would invest as much, if not more energy in proving Protestantism is logically and philosophically untenable as they do engaging in battles over Scriptural interpretation. When we do the latter, Protestants can simply make recourse to the one of hundreds of different interpretations available in their pseudo-tradition. And round and round we’ll go. If instead we show them their whole intellectual and theological paradigm is a bunch of confused, incoherent nonsense, we can command the rhetorical high ground without requiring ready-made answers to 101 common Protestant biblical objections to Catholicism.

This flaw aside, Heschmeyer’s defense of the papacy is both welcome and well-timed, given we have a pope who often gives at least the appearance of undermining traditional Church teaching on sexual ethics. This includes Francis’s controversial 2016 comments that seemed to imply contraception was permissible for those fearing contracting the terrible Zika virus, which was causing microcephaly in newborns. That incident strikes a particularly personal note, since my pregnant wife and I were living in Thailand, a Zika hotspot, when that controversy happened. Following Church teaching, we conscientiously abstained from sex (rather than use contraception) for many months out of fear of giving the virus to our third child while in utero.

Yet, as Heschmeyer rightly notes, popes can be both wrong or sinful, even egregiously so, without compromising the doctrine of papal infallibility. Infallibility does not mean impeccability. Nor does it mean everything the pope says or writes must be obeyed unquestionably. When the pope or the bishops exercise the powers of the ordinary or extraordinary Magisterium, we are right to obey. The rest of the time, as Heschmeyer rightly notes, we retain the right to ignore, or, given certain extraordinary circumstances, criticize what our Holy Father says or does.

One of my favorite arguments in the book is Heschmeyer’s direct appeal to Protestants who agree that unity and orthodoxy are essential for Christian faith and practice. That being the case, Christians need some agreed-upon interpreter to serve both as a unifying principle and an authoritative interpreter. Otherwise, unity and orthodoxy will inevitably be in conflict. He writes: “Whether or not you believe that the Church of the pope is infallible, hopefully you can at least see that if infallibility is true, it solves this apparent contradiction.”

Magisterial infallibility, Heschmeyer explains, means “believers will never have to choose between membership in the visible Catholic Church and fidelity to the gospel. We’ll never have to choose schism or heresy.” If you’re inclined to be disenchanted or incensed by our current pope, remember that comforting truth.