A Brookings Institution report published in June said that the economic shock caused by the coronavirus, combined with the social effects of the pandemic itself, could trigger a sharp decline in births.

Those predictions should not be dismissed, Dr. Catherine Pakaluk, a professor of social research and economic thought at the Catholic University of America, told CNA, noting that economic uncertainty can have a direct correlation with the birthrate.

“The money and the numbers tend to correlate with all the things we think matter for human flourishing,” she said, such as the “ability to grow and form families.”

In the Brookings report, authors Melissa Kearney and Phillip Levine warned that the coronavirus pandemic might cause a “baby bust” rather than the “baby boom” some assumed could follow months of lockdowns.

They said that two events—the surge in deaths and anxiety brought on by the pandemic, and the economic decline resulting from lockdown measures—would both cause a drop in the birthrate from “300,000 to 500,000 fewer births next year.”

“The circumstances in which we now find ourselves are likely to be long-lasting and will lead to a permanent loss of income for many people,” Kearney and Levine wrote.

“We expect that many of these births will not just be delayed – but will never happen. There will be a COVID-19 baby bust.”

The study pointed to two major historical events for evidence for their prediction, the 1918 Spanish Flu pandemic and the Great Recession of a decade ago.

Furthermore, the authors estimated a 15% decline in annual births due to the 1918 epidemic, which could predict a second major effect on the current birthrate given “the public health crisis and the uncertainty and anxiety it creates.”

Pakaluk praised the Brookings study as “totally reliable,” and said that the decline in births next year “could be on the extreme end of the numbers they predicted.”

“Birthrates have been falling anyway,” she said, noting a years-long trend which has continued even after the U.S. economy recovered from the Great Recession, which many assumed would bring a spike in the birthrate.

There was also a 1% drop in the number of overall births from the previous year, with 3.75 million children born in 2019. While a growth in fertility rates requires a “replacement level” rate of 2.1 children for population replacement, the U.S. fertility rate sits at 1.7.

Then in early 2020, the COVID-19 pandemic entered the U.S. and spread rapidly. As coronavirus infection rates and deaths soared, states began instituting strict lockdowns or closures of non-essential businesses, the unemployment rate spiked to 14% and currently stands at more than 11%.

According to the Brookings report, the Federal Reserve has predicted that unemployment will hover near 10% by the end of the year.

The twin “catastrophic shocks” of the coronavirus and massive job losses will have a deep impact on an already-falling birthrate, Pakaluk said. Further complicating the matter could be a rise in political instability in a contentious presidential election year, which could further dissuade couples from choosing to have children.

The Brookings report also predicts that a longer economic malaise could further drive down the birthrate in the long-term. “Additional reductions in births may be seen if the labor market remains weak beyond 2020,” the study concluded.

What might some of the long-term societal effects be of an extended drop in birthrates?

A smaller youth demographic could lead to a shrinking tax base, posing threats to the solvency of local governments.

“We’re seeing, right this minute” COVID-related state budget cuts of hundreds of millions of dollars, Pakaluk said, to meet pension obligations and pay for schools. According to data from the State and Local Finance Initiative and reported by NPR, 34 states saw a revenue drop of 20% or more between March and May of 2020.

The present crisis could also force a national conversation about how to pay for programs such as Medicare, Pakaluk said.

On the individual family level, many might experience “the fertility gap,” feelings of regret, incompleteness, or missed opportunities related to not having an extra child. Childless couples could be faced with finding a caregiver when they grow older, or children might feel the lack of an absent sibling.

“We have reason to think that religious people, religious communities, are more resilient to these kinds of ups and downs,” Pakaluk said of the current social anxiety and economic instability.

However, she noted, “we are in the throes of a fairly-unprecedented secularization.” 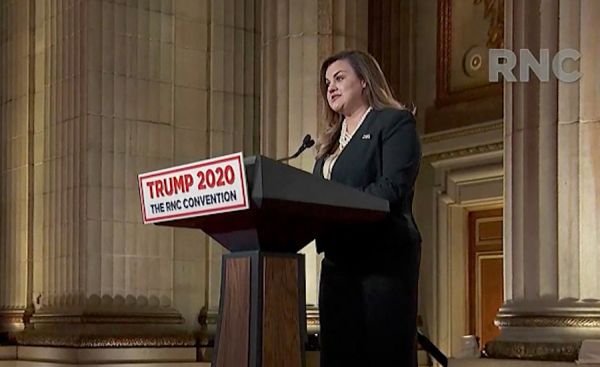 Washington, D.C. Newsroom, Aug 26, 2020 / 09:45 am (CNA).- Faith and social issues took center stage on night two of the Republican National Convention, as speakers said the Trump administration had worked to advance the cause of religious freedom, promoting pro-life causes, and criminal justice reform.

Trump, she said “has done more for the unborn than any other president” and is “the most pro-life president we’ve ever had.

Johnson graphically described a second-trimester abortion she says she witnessed while working for Planned Parenthood, saying that she saw “an unborn baby fighting back, desperate to move away from the suction … The last thing I saw was a spine twirling around in the mother’s womb before succumbing to the force of the suction.”

Seeing that abortion, she said, caused her to quit her job and leave the abortion industry.

Most Americans, said Johnson, do not understand the “barbarity” of abortion.

“They don’t know about the ‘products of conception’ room in abortion clinics, where infant corpses are pieced back together to ensure nothing remains in the mother’s wombs; or that we joked and called it the ‘pieces of children’ room,” she said.

“See, for me, abortion is real. I know what it sounds like. I know what abortion smells like. Did you know abortion even had a smell?” Johnson herself had two abortions prior to her pro-life conversion.

In her speech, Johnson referred to Biden and Harris as “two radical, anti-life activists.” The Democratic Party platform called, for the first time, for abortion to be codified in federal law, and repeated the 2016 platform’s call for a repeal of the Hyde Amendment forbidding taxpayer dollars for abortions.

The Republican Party has not changed its the 2016 platform, which calls for abortion to be illegal, but did release a list of 50 bullet points outlining the priorities of a second term of the Trump presidency. Those points do not mention abortion policy, though Johnson emphasized that in her view, Trump’s second term will feature continued efforts on restricting legal protection for abortion.

Cissie Graham Lynch, the granddaughter of evangelist Billy Graham, spoke Tuesday night on the importance of the free exercise of religion “in our schools, and in our jobs, and yes, even in the public square.”

“Our founders did not envision a quiet, hidden faith: they fought to ensure that the voices of faith were always welcomed; not silenced, not bullied,” she said. Lynch said that during the Obama/Biden administration, “these freedoms were under attack.”

Lynch cited the examples of the HHS contraceptive mandate, which she said was an attempt to “force religious organizations to pay for abortion-inducing drugs,” and efforts to force adoption agencies to violate their religious beliefs in who they worked with.

“Democrats pressured schools to allow boys to compete in girls sports and use girls locker rooms,” she said, referring to transgender activists. “Those are the facts.”

With the election of Donald Trump, she said, “people of faith suddenly had a fierce advocate in the White House,” noting that he appointed judges who “respect the First Amendment” and withdrew policies that violated conscience rights.

“The Biden-Harris vision leaves no room for people of faith,” Lynch said. “Whether you’re a baker or florist or a football coach, they will force the choice between being obedient to God or to caesar–because the radical left’s God is government power.”

One of the more emotional moments of the night was the story of Jon Ponder, a convicted bank robber. While in prison, Ponder turned his life around through a chaplaincy program. Upon release, Ponder founded a nonprofit organization Hope for Prisoners, and befriended the FBI agent who arrested him.

“My hope for America is that all people regardless of race, color, class or background will take advantage of the fact that we live in a nation of second chances,” said Ponder on Tuesday. Trump called his story “a beautiful testament to the power of redemption.”

At the end of the segment, Trump pardoned Ponder for his bank robbery conviction, which is a federal crime. Ponder had previously been granted clemency in Nevada on battery charges.

Also featured on Tuesday night was Nick Sandmann, who, as a student at Covington Catholic High School, was the subject of a media firestorm after an out-of-context clip went viral showing him smiling at a Native American demonstrator in front of the Lincoln Memorial after the March for Life earlier this year. Sandmann spoke on the topics of cancel culture and the need for media accountability and honesty.