Editor’s Note: The following is an excerpt from the chapter “The Catholic Priesthood,” by Benedict XVI, as it appears in the book From the Depths of Our Hearts: Priesthood, Celibacy, and the Crisis of the Catholic Church, co-authored by Robert Cardinal Sarah and forthcoming in English from Ignatius Press (which also publishes Catholic World Report). It has been translated by Michael J. Miller. 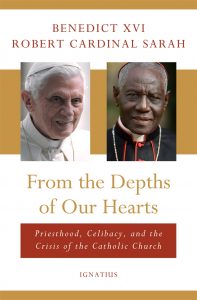 Given the lasting crisis that the priesthood has been going through for many years, it seemed to me necessary to get to the deep roots of the problem. I had started a work of theological reflection, but age and a kind of weariness led me to abandon it. My exchanges with Robert Cardinal Sarah gave me the strength to resume it and to bring it to completion.

…For the moment, let us examine several stages in the concrete development of the history of the Church.

We can observe a first step in the institution of a new ministry. The Acts of the Apostles mention the excess workload of the apostles, who, in addition to their task of preaching and of leading the Church’s prayer, had to take upon themselves at the same time full responsibility for the care of the poor. One result of this was that the Hellenistic part of the nascent Church felt neglected. The apostles then decided to devote themselves entirely to prayer and the service of the Word. For charitable works, they created the ministry of the Seven, which was later identified with the diaconate. Moreover, the example of Saint Stephen shows that this ministry, too, required not only purely practical work of a charitable nature, but also the Spirit and faith and, therefore, the ability to serve the Word.

One problem, which has remained crucial to this day, emerged from the fact that the new ministries were based, not on familial descent, but on divine election and vocation. Formerly, the continuity of the priestly hierarchy of Israel was assured by God himself, since, in the final analysis, he was the one who gave children to parents. The new ministries, on the other hand, were based, not on membership in a family, but on a vocation given by God. Furthermore, this call must be recognized and accepted by the man to whom it is addressed. This is why, in the New Testament community, the problem of vocations arises from the very beginning: “Pray therefore the Lord of the harvest to send out laborers into his harvest” (Mt 9:38). In every generation, the Church is moved by the hope and concern of finding those who are called. We know how great a labor and a worry this question still is for the Church.

There is another question that is directly connected with this problem. Very quickly—we do not know exactly when, but in any case very rapidly—the regular and even daily celebration of the Eucharist became essential for the Church. The “supersubstantial” bread is at the same time the “daily” bread of the Church. This had an important consequence, which is precisely what haunts the Church today.[i]

In the common awareness of Israel, priests were strictly obliged to observe sexual abstinence during the times when they led worship and were therefore in contact with the divine mystery. The relation between sexual abstinence and divine worship was absolutely clear in the common awareness of Israel. By way of example, I wish to recall the episode about David, who, while fleeing Saul, asked the priest Ahimelech to give him some bread: “The priest answered David, ‘I have no common bread at hand, but there is holy bread; if only the young men have kept themselves from women.’ And David answered the priest, ‘Of a truth women have been kept from us as always when I go on an expedition’ ” (1 Sam 21:4–5). Since the priests of the Old Testament had to dedicate themselves to worship only during set times, marriage and the priesthood were compatible.

But because of the regular and often even daily celebration of the Eucharist, the situation of the priests of the Church of Jesus Christ has changed radically. From now on, their entire life is in contact with the divine mystery. This requires on their part exclusivity with regard to God.  Consequently, this excludes other ties that, like marriage, involve one’s whole life. From the daily celebration of the Eucharist, which implies a permanent state of service to God, was born spontaneously the impossibility of a matrimonial bond. We can say that the sexual abstinence that was functional was transformed automatically into an ontological abstinence. Thus, its motivation and its significance were changed from within and profoundly.

Nowadays some scholars too readily make the facile statement that all this was just the result of a contempt for corporeality and sexuality. The critique claiming that priestly celibacy was founded on a Manichaean concept of the world was formulated as early as the fourth century. This critique was immediately rejected, however, in a decisive way by the Fathers of the Church, who put an end to it for a certain time.

Such a judgment [of consecrated celibacy] is wrong. To prove this, it is enough to recall that the Church has always considered marriage as a gift granted by God ever since the earthly paradise. However, the married state involves a man in his totality, and since serving the Lord likewise requires the total gift of a man, it does not seem possible to carry on the two vocations simultaneously. Thus, the ability to renounce marriage so as to place oneself totally at the Lord’s disposition became a criterion for priestly ministry.

As for the concrete form of celibacy in the early Church, it is advisable also to emphasize that married men could not receive the sacrament of Holy Orders unless they had pledged to observe sexual abstinence, therefore, to live in a so-called “Josephite” marriage, like the marriage of Saint Joseph and the Virgin Mary. Such a situation seems to have been altogether normal over the course of the first centuries. There were a sufficient number of men and women who considered it reasonable and possible to live in this way while together dedicating themselves to the Lord.[ii]

[i] On the topic of the meaning of the word epioúsios (supersubstantialis), see Eckhard Nordhofen, “What Bread Is This? What Bread This Is!”, International Catholic Review Communio 44/1 (2017): 43–71; Gerd Neuhaus, “Möglichkeit und Grenzen einer Gottespräsenz im menschlichen ‘Fleisch’: Anmerkungen zu Eckhard Nordhofens Relektüre der vierten Vaterunser-Bitte” [Possibility and limits of a divine presence in human ‘flesh’; Remarks on Eckhard Nordhofen’s rereading of the fourth petition of the Our Father], Internazionale katholische Zeitschrift Communio 46/1 (2017): 23–32.

[ii] The reader can find extensive information on the history of celibacy in the first centuries in Stefan Heid, Celibacy in the Early Church: The Beginnings of a Discipline of Obligatory Continence for Clerics in East and West, trans. Michael J. Miller (San Francisco: Ignatius Press, 2000; original German edition 1997).

About Benedict XVI 1 Article
Benedict XVI (Joseph Ratzinger) was pope from 2005-2013. A world-renowned theologian, biblical scholar, and theological expert at Vatican II, he is the author of numerous works, including a trilogy on Jesus of Nazareth, Introduction to Christianity, and The Spirit of the Liturgy. He resides in Vatican City.

The Church is all too often accused of being “obsessed” with sex. Yet is that really the case? Is it not “the world” that is obsessed with sex and thus constantly badgers the Church to […]

“The Light of Christ” is far more than an “Introduction”

Fr. Thomas Joseph White’s new book is an erudite, rich, and accessible guide to Catholicism that demonstrates in the inner cohesion and profound logic of the […]

Editorial: Benedict XVI’s essay is both insightful and incomplete

Reaction to the unexpected release of a lengthy text—almost exactly 6,000 words in all—by Pope Emeritus Benedict XVI, titled “The Church and the scandal of sexual abuse”, has been both swift and polarized. Some have […]