Rome, Italy, Oct 21, 2019 / 08:50 am (CNA).- In the Roman catacombs Sunday morning, some bishops participating in the Amazon synod signed a pact about how they want to conduct their particular churches in the Amazon region, following the style of a similar Catacombs Pact from during the Second Vatican Council.

The two-page document is called “Pact of the Catacombs for the Common Home,” and says it is “for a Church with an Amazonian face, poor and servant, prophetic and Samaritan.”

Quoting a line from Pope Francis’ homily at the opening of the Amazon synod, it says, “so many of our brothers and sisters in the Amazonia are bearing heavy crosses and awaiting the liberating consolation of the Gospel, the Church’s caress of love. For them, with them, let us journey together.”

It was signed by an estimated 40 bishops after a Mass celebrated with about 250 people in the Catacombs of Domitilla in the south of Rome in the early morning Oct. 20. The Mass’ main celebrant was Cardinal Claudio Hummes, who holds the position of relator, or chairman, of the Amazon synod.

Hummes is the archbishop emeritus of San Paolo, Brazil and the president of the Pan-Amazonian Ecclesial Network (REPAM), a driving force behind the synod.

Crux reported that Emeritus Bishop Erwin Krautler of Xingu, Brazil, was the impetus behind developing the Catacombs Pact during the Amazon synod.

The Oct. 20 declaration was modeled after the Pact of the Catacombs: A Poor Servant Church, an agreement signed by 42 bishops on Nov. 16, 1965, near the close of the Second Vatican Council.

The 11 points of the 1965 Pact of the Catacombs mostly centered on the commitment to avoid wealth and to live “according to the ordinary manner” of their people in regards to food, housing, transportation, and related things, and to renounce symbols of power.

The document, which was later circulated and adopted by about an additional 500 bishops, was likewise signed after a Mass in Rome’s Catacombs of Domitilla.

The signatories of the 1965 “pact” included many Latin American bishops, and is said to have had an influence on the development of “liberation theology,” much of which has been condemned by the Church.

In 1984 and 1986, while prefect of the Congregation for the Doctrine of the Faith, Cardinal Joseph Ratzinger issued two instructions, approved by Pope St. John Paul II, denouncing many aspects, tendencies, and conclusions of liberation theology.

The Oct. 20 declaration notes a gratitude for the bishops of the Second Vatican Council who signed the 1965 Pact of the Catacombs for the poor, and says they remember “with veneration” all those “who shed their blood for this option for the poor, for defending life and fighting for the protection of our Common Home.”

They state their decision “to continue their struggle with tenacity and courage” in the midst of a “feeling of urgency that prevails in the face of aggressions that today devastates the Amazon territory, threatened by the violence of a predatory and consumerist economic system.”

Invoking the Holy Spirit, they commit themselves “personally and communally” to 15 points, including the commitment “to abandon… all types of colonist mentality and posture,” instead “welcoming and valuing cultural, ethnic and linguistic diversity in a respectful dialogue with all spiritual traditions.”

The signatories denounce violence against the autonomy and rights of native people and their ways of life and state a commitment to “announce the liberating novelty of the Gospel of Jesus in welcoming the other and the one who is different.”

They promise to establish “a synodal lifestyle” in their particular churches, in which representatives of native people, missionaries, and other lay people have a “voice and vote” in everything “that concerns the governance of the communities.”

They commit to recognize and value the work already being done in ecclesial ministries in their communities and to move from “pastoral visits to pastoral presence,” “ensuring the right to the Table of the Word and the Table of the Eucharist…”

The bishops promise, as well, to recognize the service and “real diakonia” of women in the Amazon, and to “consolidate them with an adequate ministry of women leaders in the community.”

Several of the points refer to the protection of our “Common Home,” making the promise to live a simple and “happily sober lifestyle” in the face of consumerism and “extreme global warming and the depletion of natural resources.”

They promise to “defend the Amazon jungle” by cutting down on their production of waste and their use of plastic, and by using public transportation whenever possible.

The bishops who signed the pact call themselves not “the owners of Mother Earth, but rather the sons and daughters,” and commit themselves “to an integral ecology in which all is interconnected, the human race and all creation, because all beings are sons and daughters of the earth and over them the Spirit of God moves (Gen 1:2).”

They declare their commitment to renew the preferential option for the poor in their churches, especially for native peoples, and to help them to “preserve their lands, cultures, languages, stories, identities and spiritualities.”

The signatories also promise to “cultivate true friendships with the poor, visit the simplest people and the sick, exercise the ministry of listening, comfort and support that bring encouragement and renew hope.”

The pact closes by saying they place themselves under the protection of the prayers of the Church, and they request to be helped with the intercession, affection, and “when necessary, with the charity of fraternal correction,” of their ecclesial communities. 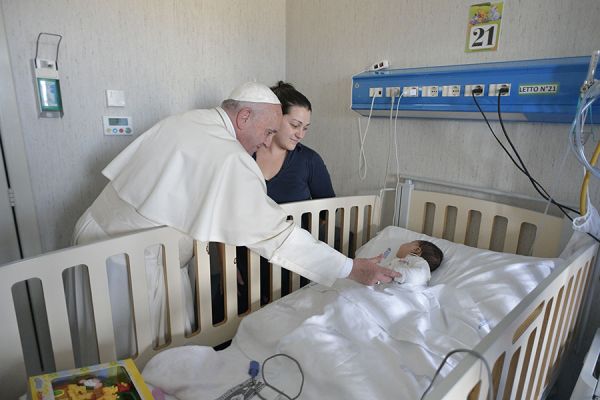