Pope Francis has approved a miracle attributed to the intercession of Archbishop Fulton Sheen, paving the way for his beatification at a yet to be announced date.  The miracle involved the unexplained recovery of a baby boy, James Fulton Engstrom, within the Diocese of Peoria, Illinois, who was without a pulse for 61 minutes, but revived after his mother prayed to Sheen, to whom she had long been devoted.  The boy has gone on to live a normal, healthy childhood.  James’ mother, Bonnie Engstrom, has shared her son’s story in many interviews. 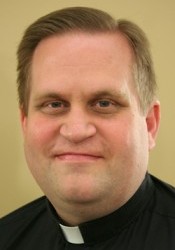 In other Sheen news, the archbishop’s remains were recently transferred from St. Patrick’s Cathedral in New York City to the Cathedral of St. Mary in Peoria, after lengthy litigation involving the two dioceses.  The transfer of the remains was necessary for Sheen’s Cause to continue; Sheen grew up in Peoria, served as an altar boy at its cathedral and was ordained a priest for the diocese in 1919.

Peoria is comprised of 26 counties in the center part of the State of Illinois covering 16,933 square miles. It serves nearly 200,000 Catholics, with 298 diocesan and religious order priests and 162 parishes. The Diocese of Peoria is celebrating the return of Sheen’s remains and his pending beatification.  Msgr. James Kruse, JCL, vicar general of the diocese, speaking on behalf of diocesan bishop Daniel Jenky, spoke with Catholic World Report about Sheen’s Cause.

CWR: What is the status right now with Archbishop Sheen’s remains?

Msgr. James Kruse: The remains were transferred from New York to our cathedral in Peoria on June 27.  They are buried in a marble sarcophagus under an icon of Our Lady of Perpetual Help.  The faithful are welcome to come to the cathedral and pray before his remains.

CWR: Why is it important for his remains to be in Peoria?

Msgr. Kruse: When Archbishop Sheen’s cause began, Cardinal Edward Egan said his body would be transferred at an appropriate time.  Peoria received indications from Rome that civil litigation would have to be settled and the remains transferred before the Cause could continue.

CWR: You were involved with the litigation.  What was it all about?  What were the legal issues involved?

Msgr. Kruse: You’ll have to do your homework to find out.  The bishop has directed us not to focus on the litigation, but to turn the page and move on.

[Editor’s note: Some information about the litigation and controversy can be found here and here.]

CWR: Has a date been set for the beatification?

Msgr. Kruse: We are waiting for a date from Rome.  The latest development was that a miracle involving a boy was approved, and Pope Francis called for Archbishop Sheen’s beatification.

CWR: Can you talk a bit about the archbishop’s roots in Peoria?

Msgr. Kruse: He was born in El Paso, which is not far from Peoria, in 1895.  He attended our cathedral school and a high school near the cathedral.  He was a seminarian for Peoria, and was ordained a priest for Peoria.  His first parish assignment was for Peoria.  And, the recent miracle involving the boy took place at a medical facility just a few blocks away from our cathedral.

CWR: Does he have any old friends left in Peoria?

Msgr. Kruse: Some of our older priests have personal memories of him.  Also, he still has extended family in the area.

CWR: What has your role in the Cause been?

Msgr. Kruse: I’ve been involved with the Cause since 2011, I was involved in litigation over the transfer of the body and I’m planning for the beatification ceremony.  I also served on the committee investigating the recent miracle.

CWR: What impressed you about the miracle?

Msgr. Kruse: It was an unexplained recovery of a baby boy.  It is unheard of that a baby, without a pulse for 61 minutes, comes back to life.  We interviewed the medical staff involved with this case, many of whom were non-Catholic or not even people of faith, who testified that there is no medical explanation for what happened.  They said it was a miracle.  They were fearful that he’d have brain damage or other physical problems, but he appears to be a normal, healthy boy.

CWR: When you read about Sheen’s life, or read his writings or listen to his sermons, what impresses you personally about him?  Why is he a good candidate for sainthood?

Msgr. Kruse: He is a good candidate because of his absolute holiness of life. Early in his priesthood, for example, he committed himself to making a daily Holy Hour, and kept it up during his 60 years of priesthood. He was also devoted to the Blessed Mother, and to the priesthood.  He also taught with clarity through his TV series, his many books and retreats.

CWR: Is one more miracle needed for his canonization?

Msgr. Kruse: Yes. It needs to be a miracle that both occurs and is investigated after his beatification.  Once that miracle has been investigated and authenticated, the pope would call for him to be canonized.

CWR: Do you receive many reports of miracles occurring through Sheen’s intercession?

Msgr. Kruse: Yes, we regularly receive reports about such miracles, and are grateful to hear about them. But for the canonization, it has to be a miracle that occurs after the beatification.

CWR: How is the Diocese of Peoria doing for vocations to the priesthood?

Msgr. Kruse: We continue to receive young men into our seminary, and have about 25 in the seminary now.  We ordain one or two a year to the priesthood.

CWR: Do you have any major initiatives going on in the diocese?

Msgr. Kruse: We’re in the process of building a $25 million retreat center in Henry, Illinois, a rural part of the diocese.  It is replacing an older center, and will double its size.  It is in a nice, forested area; it’s a great place for spiritual renewal.  We hope to see it open within the next year.

CWR: Bishop Jenky participated in a press conference with other Illinois bishops in the state capitol earlier this year to promote pro-life legislation.  He was using a wheelchair.  How is his health?

Msgr. Kruse: He doesn’t use a wheelchair regularly.  The capitol complex is so large, and as many older people suffer from stiff joints and bad feet, it was decided that the bishop should use a wheelchair rather than walk.

Msgr. Kruse: We’re excited about Archbishop Sheen’s pending beatification, and will have a huge celebration once it occurs.