The Catholic Writer Today and Other Essays is not your typical essay collection. The title essay explicates the theme. The pieces that follow — two of which are written exchanges with Robert Lance Snyder and Erika Koss — serve as variations to further illuminate that theme, which is more subtle than one might suppose. 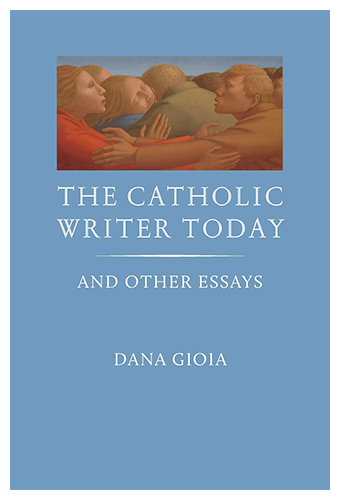 Dana Gioia, of course, is best-known as one of our best poets. From 2003 to 2009, however, he was also the chairman of the National Endowment for the Arts. But he started his career working for General Foods, rising to vice president of marketing and credited with saving Jell-O from oblivion. Not bad for someone who, in his exchange with Robert Lance Snyder, describes himself as a “Latin Catholic — a mixture of Italian and Mexican … raised by working people who were born in poverty and suffered enormous losses in their lives.”

Catholicism isn’t an abstraction for Gioia. It is — as it is supposed to be — something lived. For him in particular, it is inextricably bound up with art, music, and literature (Gioia is a musician and has written both song lyrics and libretti).

He notes early on that “surprisingly little Catholic imaginative literature is explicitly religious; even less is devotional. Most of it touches on religious themes indirectly while addressing other subjects — not sacred subjects but profane ones, such as love, war, family, violence, sex, mortality, money, and power.” He adds that readers who “want inspiring books written by exemplary individuals who depict virtuous characters overcoming life’s obstacles to arrive at happy endings … should avoid most Catholic literature.”

In the title essay, Gioia points out that in the two decades following World War II, “Catholics played a prominent, prestigious, and irreplaceable part in American literary culture.” The list of writers he has in mind takes up most of the page that follows. Those writers won major literary awards: “Between 1945 and 1965 Catholic novelists and poets received 11 Pulitzer Prizes and 5 National Book Awards.”

But Catholic writers in other countries were prominent then as well. Francois Mauriac won the Nobel Prize for Literature in 1952. Evelyn Waugh, Graham Greene, Edith Sitwell, and Muriel Spark — to name a very few — were internationally known.

First, many important Catholic writers publicly identified themselves as faithful Catholics. Second, the cultural establishment accepted Catholicism as a possible and permissible artistic identity. Third, there was a dynamic and vital Catholic literary and intellectual tradition visibly at work in the culture. Fourth and finally, there was a critical and academic milieu that actively read, discussed, and supported the best Catholic writing.

None of that obtains today. And were this merely the problem of one nation’s literary life, undo concern over it would be, well, parochial. But the underlying cause for concern is much broader.

As Gioia makes plain in his essay on Gerard Manley Hopkins, it extends both temporally and geographically far beyond America’s shores:

The tradition of English poetry is inextricably linked to Christianity. … Starting with Chaucer, Langland, and the anonymous medieval authors of The Pearl and Sir Gawain and the Green Knight, Christianity emerged early as a central element of English literature. The tradition continued robustly for six centuries with major poets in every generation ….. Then midway in the nineteenth century, the tradition founders.

Many writers, unable to reconcile modern science and philosophy with religious tradition, experienced a crisis of faith. Typical was Matthew Arnold, whose “Dover Beach” lamented the Sea of Faith’s “melancholy, long, withdrawing roar” and whose “Stanzas from the Grande Chartreuse,” Gioia says, “articulates the broad spiritual dilemma.”

What has happened in America over the last six decades is simply the latest manifestation of the foundering of the Christian literary tradition that took place in Victorian England. The same, of course, has affected continental Europe as well. And when you add to the mix Western painting, sculpture, and music, you are left with a culture that “has largely lost its sense of the sacred.” This creates a rather worrisome problem, “namely, once you remove the religious as one of the possible modes of art, once you separate art from the long established traditions and disciplines of spirituality, you don’t remove the hungers of either artists or audiences, but you satisfy them more crudely with the vague, the pretentious, and the sentimental.”

Gioia says that when he speaks at Catholic institutions, “I feel it important to remind the audiences of two facts — first, how central the arts have been historically to Catholic worship and identity; and second, how completely the church has abandoned the arts in recent times.”

In the delightful little essay that concludes the collection, “Singing Aquinas in L.A.,” he provides a nice personal perspective to all this. The focus of the essay is on singing Tantum Ergo (text by Thomas Aquinas) at Benediction as a kid in catholic school: “… as I stood singing this short hymn with all my friends and teachers, I physically felt enraptured and exhilarated in the act of veneration.” He says that now, “as an adult, I can’t accurately judge whether that experience was spiritual or aesthetic.” But “I do know from my earliest memories that Tantum Ergo struck me as penetratingly sublime.”

He attended Mass — “listlessly,” he says — six times a week. But it was the infrequent Benedictions that “brought me into the mysteries of faith.” There, “I momentarily lost my self-consciousness … singing ancient and enigmatic words in honor of an inexplicable transubstantiation.”

Small wonder the changes wrought by Vatican II exerted a negative effect on him: “At Mass we now sang folksy anthems composed by amateur Jesuit musicians. If hell has a hymnal, these tunes will fill its opening pages”

So, for him, “aggiornamento became addio.” After high school, he stopped attending Mass. “I never left the Church. I just stopped showing up.” But there was this unsatisfied hunger. “Finally, in middle age, I accepted the bad music as punishment for my sins and rejoined as a communicant.”

So what is to be done?

Gioia isn’t looking to the hierarchy for any guidance. “I am prepared to believe in miracles,” he says, “but the notion that the Catholic hierarchy will make literature and the arts a priority and then exercise good judgment in supporting them exceeds all credulity.” Actually, “ecclesiastical indifference … is a great blessing — perhaps even the miracle I hope for.” It will spare us the hierarchy’s interference. Probably, “they won’t even notice an artistic renascence until long after it is fully launched into the world.”

So where will any literary renewal come from? Well, it obviously has to start with the writers. But their work “matters very little unless it is recognized and supported by a community of critics, educators, journalists, and readers. The Communion of Saints is not only a theological concept, it is the model for a vibrant Catholic literary culture.”

In other words, it is up to those the Church must always depend upon most. Those it was founded to serve: the faithful.

Intelligent Design: On the Poetry of Catherine Chandler

Early in Catherine Chandler’s first book, Lines of Flight, she writes of “a six-mile stretch of road” along the historic Route 66, where “two towns align,” one bearing an old friend’s family name and […]

December 14 marks the 75th anniversary of the death of Maurice Baring, literary convert, bestselling novelist and beloved friend of G. K. Chesterton. To commemorate the anniversary and to celebrate the legacy of this great […]

Flannery O’Connor, says Joshua Hren, “raised some crucial problems: in literary works written in a world that lives as though God is dead, do we need […]