In his verse memoir, The Prelude, William Wordsworth wrote: “I began/ My story early, feeling, as I fear, / The weakness of human love for days/ Disowned by memory.” He was anticipating the objection that his childhood was not fitting material for serious poetry. He also seems to ask the question of us: what is worth remembering? For memory is poetry’s raison d’être. Ought we only to set down in verse those elements of the epic, so rare in human experience? Or may we also memorialize those moments “disowned by memory?” 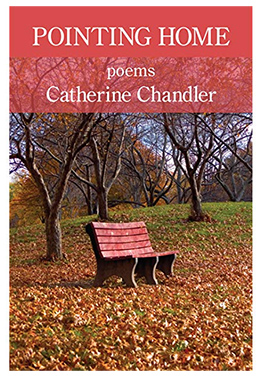 Catherine Chandler, in her new collection of poems Pointing Home, chooses the latter. Pointing Home is filled with poems of remembrance, especially the sonnet series entitled “Madison Street.” “Imagine this,” she instructs us in the first sonnet, “a narrow one-way street/ in northeast Pennsylvania long ago.” The Victorian poet Dante Gabriel Rossetti famously referred to the sonnet as “a moment’s monument.” Chandler’s sonnets memorialize moments so seemingly trivial that even Rossetti might reconsider his maxim. These are sonnets about the goings-on of an obscure neighborhood in 1950s America.

However, therein lies the beauty of Chandler’s project. We would be poorer if we did not remember the little things that take up the lion’s share of our life. Elsewhere in the book her poem “Plain Beauty,” (a riff on Gerard Manley Hopkins’ “Pied Beauty), lets us in on her ars poetica:

Glory be to God for Homely things—
For muddy boots and oil-stained dungarees;
For calloused hands that knead and scrub and hem.

They whelm the world in love. It’s not enough.
Love them.

Chandler, like St. Therese, recognizes that God is glorified in our smallness, in our fragility, in monosyllables. God made this workaday world, and what’s more, He entered it. We were not redeemed from the quotidian. We are redeemed in the midst of the quotidian. The dull moments of our life are lovable precisely because Our Lord lived them too. This “little way” is the difference that separates Chandler’s colloquial poetry from its many other practitioners. She’s also simply better at it. I can think of half a dozen poets, mostly professor types, who think they know how common people speak. The result is ugly pastiche. The plain style is also a too common defense against the too common criticism that traditional verse craft is out of touch with spoken English. With a few exceptions, Chandler never sounds like she’s putting on an Everyman persona, and often enough her verse rings with a musicality that is missed in English poetry.

Though the bulk of the collection concerns Chandler’s personal past, she does foray into our uncertain, collective present. In the poem “Nines” she recalls her first-grade teacher calling the roll,. She then turns her attention to cold war era bomb drills, but mingled in the poem Chandler “roll calls” the names of the victims of the Columbine, West Nickel Mines, and Sandy Hook school shootings. This roll call is a chilling incantation and speaks to Chandler’s formal inventiveness. The poem’s real brilliance though is in the comparison between the laughably futile bomb drills of the last century with the, by implication, futile active shooter drills of today. The poem concludes with devastating irony:

Chandler continues this theme in “Votive” but the emotions are more direct, not veiled by the artifice of the form, as in “Nines.” She is in St. Joseph’s Oratory in Montreal, praying for the victims of the Sandy Hook shooting. She does not engage in theodicy as she considers the ages of the children, “the dates, unbearable and brief,” but prays through her “limits of belief” like an Old Testament prophet. Each stanza is punctuated by the same rhyme, “reliefs,” “belief,” “brief” which is, again, incantatory, like a litany, but also serves to give us the feeling of something that keeps happening. She ends the poem, however, with an unsatisfying “curse” of “the waiting game/ in Washington.” The political feels like an intrusion on this intensely personal moment. It’s like receiving a New York Times phone notification during prayer. It’s a fine poem, and if it weren’t for the gravity of the subject, we would be tempted to place among the many well-wrought, but ultimately unmemorable poems that tend to bog down Pointing Home.

A whole section of the book is made up of translations of lesser known Spanish language poets (along with some originals). This is to the good, we need more translation outside the canon. However, while they may complicate our vision of the poet’s home (she splits her time between Canada and Uruguay) they read like something tacked on to the back, extras. They are good enough poems that they warrant, perhaps, their own chapbook. This is not a criticism unique to Pointing Home, as poetry books get longer, and they have in recent years, there will inevitably be “filler” poems.

But let us return to “Madison Street.” Here, Chandler employs a kind of mash-up of the English and the Italian sonnet, called the Dorn Sonnet (rhymed ABCABCDDEFEFEF). Both the Italian and English sonnets are marked by an initial argument followed by a “turn,” which serves to complicate, contradict, or reemphasize the original argument. Like the English sonnet, the turn in the “Madison Street” sonnets happen at the couplet. But rather than being at the end, the couplet is inserted between two sestets. Like the Italian sonnet, the turn happens toward the middle, rather than at the end. In the end, they are neither English nor Italian sonnets. They have an odd weight to them, a beguiling symmetry; two sestets with a couplet in the middle like a pair of scales hanging in the balance. Unsettled, the reader is invited to weigh in, to decide on which scale to place the couplet.

Formally, these poems succeed brilliantly. That is not to say that they do not blunder. More than once, Chandler allows wistfulness to get the better of her and the reader is brought into the world of anecdote. Consider “Thinking of Happiness, She Thinks of That” in which we’re brought along as the speaker roller-skates her northeast Pennsylvania town. We are given a list of names of people and places that mean nothing to us, and Chandler will not let us in. Whole lines are wasted to report on her “roller skate key swinging on its chain.” There is slightly more going on in “Retail Therapy” which tells the story of three women whose husbands all die “within the space of several months.” There is a suggestion that the women killed their husbands and are living on the insurance money: “though the papers said/ it was an accident, we’ll never know,” and several lines later, “Now Joe’s dungarees don’t sport a patch/ the Lake and Novak homes are mortgage free.” Is this a thinly-veiled critique of consumerism? Sure. But the drama needs more than fourteen lines to unfold in this case.

Apart from these lapses, Chandler is masterful in her use of nostalgia. Nostalgia, of course, comes from the Greek nostos (to return home) and algos (pain), the pain of returning home. Which brings us to the crux of the collection. We often use the word “nostalgia” as a quick write-off. But why? It is something common to the human experience, and most people are able to separate nostalgia from fact; yet the feeling remains. So then, we are all nostalgic after a home to which we have never been. Nostalgia, well executed, should remind us that things are not as they should be. It should point us back to our first home, paradise lost, and then to our true home, paradise regained. The beauty of Chandler’s eschatological vision, though, her “little way,” is that it does ultimately point us home, but does not discount this world, transitory as it is. As she reminds us in “Pennsylvania Coal Town (1947),” an ekphrastic after a painting by Edward Hopper:

Life is tumbledown
but this I know is true: that I would give
my eyeteeth for the chance to tell the man
in Hopper’s painting, Love it while you can.

Pointing Home shows us that, yes, this world is passing, but that everything we yearn for in our nostalgia will be fulfilled in the end.

The New Authoritarians – What changed in March 2020? How have things played out? What are the causes? What can we expect, looking ahead? Evil In Our Time: Naomi Wolf on the Covid Response (Brownstone […]

The Immaculate Conception and the seamless garment of doctrine