James Matthew Wilson’s intriguing and intricate new collection of poetry begins with an epigraph in which James George Frazer, author of The Golden Bough, suggests that the Jewish festival Purim, with its destruction of an effigy of Haman, derives from a Babylonian new year festival called Sacaea, which featured “crucifying or hanging a man in the character of a god.” According to Frazer, “in this form the story of Jesus … set a thousand expectant strings vibrating in unison wherever men had heard the old, old story of the dying and risen god.” 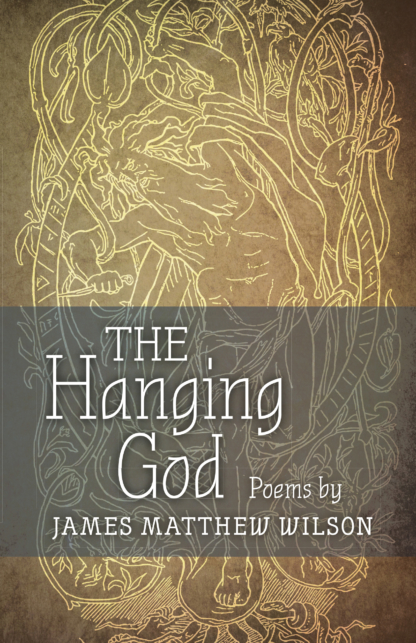 Jesus makes his entrance on these pages toward the end in a sequence titled “The Stations of the Cross,” but our fallen nature and the sins it spawns are evident from the start and throughout. The very first poem in the book, “See”, urges us to look “into the dark, / Where spoiled wants and words ferment,” and reminds us that “Our bodies harbor the abyss ….”

This last is abundantly demonstrated in the sequence of 14 sonnets titled “Wiped Out”, a wrenching account of what can happen when lust is mistaken for love. “She was a liar—pathological,/I mean,” the sequence begins. The unnamed young lady’s prevarications are then catalogued. For instance:

Her grandpa had been a preacher. Knelt in prayer,
She sometimes heard his voice; it was a scare,
Or so she said, but it was all untrue.

The young speaker justifies himself at first — “Her lies were like a ditch I’d veered into,” he declares — but then a bit of self-awareness starts to take hold:

You heard sometimes the things a guy’s believed,
And search his eyes to check if he is joking,
But find a glassy earnestness, deceived,
No doubt, but real …

He finds himself “half conscious of / The lust and lies from which I’d built my love.” Our lover boy is a Catholic. He tells us (in the third person) that “he was celibate / Until he met her … he cannot wait / To buy what ring he can and set a date.” But then, “Sometimes, I’d try to read, or sit through Mass / Wanting to exorcize her from my head.” As it happens, his lady love does the dirty work for him. Guys start calling him at night, asking rude personal questions, making lewd propositions. He asks her about it and she points him to the men’s room. There, “on the wall, /In black, my name and failings all spelled out. / I scored the marker through her words, so all was wiped out … Our lines were sealed in that dark block as one.”

That fallen nature of ours and its consequences are looked at from an altogether different angle in “The Stations of the Cross”, wherein the victim’s agony is made the prism through which we see the gruesome banality of sin. The sorry relationship recounted in “Wiped Out” seems echoed in the meditation on the 11th station:

For we who meet in dark motels
To clasp a stranger to ourselves,
His palm split as they drove the nail.

But we are reminded that indifference and complacency are every bit as morally dubious as casual adultery:

For us, who keep our kitchens clean,
Who’d never have ourselves thought mean,
We had them drive the final nail,

And set him hanging, his fists bleeding,
While we went shopping, preening, feeding,
And in his shadow pared our nails.

Literary taxonomists would peg Wilson as a formalist. But while his mastery of meter, rhyme, and stanza is certainly noteworthy, what is really remarkable is how this virtuosity is so completely subordinated to the imaginative vision informing the poems.

That vision here, more often than not, is elegiac. Many of the poems seem to be mysterious backward glances of regret.

Take the opening stanza of “In Sickness”:

Our first kiss, I remember, came
As you showed off a brand new dress,
While I laughed at your pouty claim
You’d die some lonesome anchoress.

But soon there is this: “This night, in thought, that lost night plays— / That kiss of which I’ve grown ashamed.” The poem concludes:

I serve you tea and aspirin,
Your body sweating, fevered, chill.
I wait for you to heal, and, when
You have—I’ll leave for good. I will.

For if our love sprang from my terse
Laugh and peremptory kiss, its passing
Will come more soft and be the nurse
Of an indifference far more lasting.

That first kiss, we learn, was peremptory. In what sense? It is hard to imagine that Wilson does not know that peremptory derives from the Latin perimpere, meaning to destroy (though it can now mean something no worse than brusque — after all, his laugh was terse). But there has been love, though we are told it will pass, nursed by an indifference more lasting. Bear in mind, the speaker has actually been doing some nursing, serving tea and aspirin to someone actually feverish. The ambiguity at work here — interestingly underscored by the off-rhymes — seems to point to something nearer to heartbreak.

Wilson has real talent for poetic narrative. Which is to say the very structure of the telling is distinct from prose. A fine example is “The Consolation of Oranges,” a spin-off from a vision the Roman philosopher Boethius said that he had while thinking about his death, of a woman with “eyes burning with an unnatural heat … so ancient I could hardly confuse her with the women of my age.”

The poem begins with a man and a woman “just off the trail / Along the Quabbin Reservoir” (in Massachusetts). The man is the speaker. “She whispers, bruised hand taking hold / Of my arm, her face drawing close // Though no one for at least two miles.” It was in fact “that emptiness / I’d been referring to in pointing / To a lone pine … ‘A symbol of some sort,’ I said.”

She answered, “Atheists are those
Who, having looked at symbols spelled
In branching, scattered dust,
See only things, not what they mean.”

This is poetic through and through, and not just because the lines are in iambic tetrameter. The second section of the poem reveals that the woman, like Boethius’, has her origin in dream: “The sun rose to reveal her at her station, /Where I dreamed she had come in consolation … But somewhere past, she’d touched me as I scanned / For stones to skip across the purpled water / Held back my arm, said she was Zion’s daughter.”

The next three sections take us somewhere else. The speaker is walking up a stairwell, the steps “worn smooth / as river stones.” On the steps he sees a bit of orange peel, then “a longer band, / More generous, a sphere filleted / And flattened as cartographers // Mash an idea of the earth / On paper.” Finally, uneaten, the “broken body of the orange.”

“It was as if I’d followed him,” the speaker says at the start of the next section. “Some boy, whose stub nail dug it free, / Following his mother upward, toward / The waiting room for cancer patients ….” In the final section, the speaker tells us that “The orange skin gave more of itself, // Hinting at form like a world that /Keeps rolling up from in its map ….” To tell more of the poem would be a spoiler. It is enough to say that, unlike a story in prose, where the focus must be on what happens next, the focus of a story in a poem needs to be on the form everything that happens in the story adds up to.

It works because, as with any successful poem everything is in synergy — sound and sense, word and image, matter and form — like just about all of the poems in The Hanging God.

Mother Teresa teaches us that work must be based in love in order to be truly fruitful. This truth applies to all work, whether one […]

Love In an age of tolerance and abortion

One of the accusations most often leveled against Catholics is that we are “intolerant.” The world calls us intolerant because we don’t accept everything people do without question or protest. It’s a somewhat bitter irony […]