If you’ve been following our so-called Catholic Literary Revival, you’ll have noticed that James Matthew Wilson has had a banner year—a new book, poems in the Hudson Review, and Best American Poetry. He has also recently released a revised edition of Some Permanent Things, his first full-length book of poetry (originally published in 2014), with revisions that strive, as he tells us in the preface, “to come closer to that ease and fluency that belongs to the classics of our prosody.” 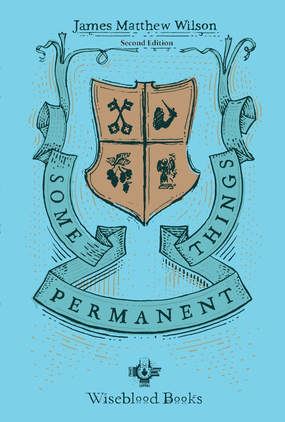 The sonnet “Solitaire” is one of the more substantially revised poems in the collection. In it, the speaker sits inside the house of a sick loved one playing solitaire. The old version was metrically sound, with scattered anapestic variations, which also occur in the new version, but the rhyming was labored and the images were fuzzy. Now we see in clear focus the “frosty handle/ Of vodka. Daffodils begin to dip/ Above their vase and toward the scented candle.” Now consider the older rendering: “Next to the untouched vodka in your freezer;/Dead daffodils, whose water grew corrupt/ And brown, have been replaced with new stems tweezered.” Besides the fact that “freezer” and “tweezered” make for a distracting, cacophonous rhyme, the drooping daffodils add pathos that the dead ones lacked. The new version also simply gives the reader more information within the same amount of space. We know, for example, that the owner of the house is an avid vodka drinker because she has nearly a half a gallon of it in her freezer, only it’s gone frosty because she isn’t there to drink it.

It has often been observed that verse is a mnemonic device. The mythic muses are literally daughters of Memory, or as Dana Gioia has it: “Before writing, poetry…stood at the center of culture as the most powerful way of remembering, preserving, and transmitting the identity of a tribe, a culture, a nation.”i This is radical stuff because it assumes a common identity, a collective memory. Remembering, then, becomes a radical (as in radix, root) revolt against modernity, whose stock in trade is forgetfulness. In the collection’s title poem, Wilson announces his poetic agenda. The final stanza reads:

But discontented sipping irony
The occasional citizen will hear a drum
Sounding with more than antique vibrancy
He wanders through the alleys till he come
On an old flag in the collective attic
Too plain for casual appreciation
Enduring every age’s violation,
Its crest grown true, more bloody, and more vatic.

The turn in the poem happens when the citizen, not the individual, leaves his cubical in the retail bank where he is cut off, to the collective attic where he is reintegrated. Thus Wilson invites his reader for a rummage around this “collective attic” where we will recover those things that bind us together. The drum we hear is a response to Eliot’s claim in Little Gidding that “we cannot revive old policies/ Or follow an antique drum.” Wilson’s reply is that the beat of iambic poetry is not that of an antique drum but a natural function of English speech. It is nature methodized, as Pope might say.

While Wilson certainly sees verse as a mnemonic device, he goes much further. One of his favorite metaphors for poetry is the human body. If the body politic is real but abstract, the human body is concrete. Referring to Judith Butler and her cadre of postmodern critical theorists he writes:

These critics kick that pregnant dog, literature, in the gut to demonstrate that matter does not matter, even as, contrary to [Descartes], they do not believe in an intellectual soul, but merely in the “possibility” of the body’s absolute liberation from the conditions of it’s existence—beginning with those ties that do, but should not, bind: body, form, truth, goodness, self-diffusiveness, fertility, and life. ii

That is, these critics advocate formless, meaningless poetry because they advocate for the absolute freedom of formless, meaningless persons. Thought cannot be embodied into something so crude and corrupt as language, they say. Wilson returns to this line of thought in “Verse Letter to my Father,” which is the cornerstone of the whole collection. In it he remembers his father building a desk, and wonders: “how we may or may not make/an artifice out of things of nature.” He remembers watching on television “Some doctor with his scalpel and defiance/ Made look a woman what had been a man,” which he simultaneously compares to Mary Shelley’s monster and the hermaphrodite in Percy Shelley’s The Witch of Atlas. Near the end of the poem he says, ironically “Your body’s yours, just as this poem is mine:/ To make, destroy—a tenancy of will, / For every citizen and concubine.” He means just the opposite. This poem does not belong to him, properly speaking, and must adhere to certain rules if it is to fulfill its end, indeed to be a poem at all. It, like the human body, must be snatched from “the stretched net of private property.” Poetry then is ontological. If the body matters, we will make art as if the body matters. If the body meaningless, so too will be our art. There are no new heresies. The Judith Butlers of the world are just warmed over Gnostics.

For Wilson (adversus the modern heretics,) poetry is incarnational. He has no need to neglect the body on the one hand or valorize it on the other. In “Living Together” the poet turns his attention to the small intimacies of cohabitation:

A coil of fabric and lost hair appears
By trimmed nails, dry husks of dead beetles, bottle
Caps flipped into a corner off our beers,
Where chance has gathered it with dust to mottle

And rise in the bright air from off the river.

This is pretty unromantic stuff, and he admits to his “frank revulsion,” but through this observation, he is able to recognize that our common life in all is fleshly entanglements is still worth pursuing. Likewise in “At the Public Pool” Wilson considers sexual desire in the context of public life. The speaker’s gaze shifts from the female lifeguard, to senior citizens, to teenagers, to his daughter, and back to the lifeguard. He concludes “I clutched my daughter, but my eyes searched her/ And dreaded what, a moment, I could want.” This dread does not come from a fear of desire as such, or even of sin. It is a dread of lapsing one’s role in the community. Adultery means the destruction of the family, which in turn means destruction for the polis. The suppression of our individual desires is entailed in our citizenship, but the benefits far outweigh the sacrifice.

Wilson, in revising his poems to a more exacting standard seeks a greater degree of intelligibility, a greater degree of humanity. To put in Thomistic terms he is seeking greater integritas, consonantia, and claritas. Wilson, having strengthened the shape of each poem by tightening the meter, and, especially, the rhymes, has given his poems greater integritas. It is language put into perfect order from the rubble heap of common speech. If a poet uses his tools improperly, he is like a builder who uses two different measures on the towers of a church. Claritas refers to the intelligibility of a given work of art. As we have seen, metrical poetry assumes an intelligible universe. If we may return to “Living Together,” we can see that a stricter meter can clarify what was obscured. The first two stanzas of the first version read:

Where flecks of fabric tangle with your hairs,
Trimmed nails, the dry husks of dead beetles, bottle,
Caps flipped into a corner off our beers,
There lies neglect and memory grown mottled

With light and wet air off the river; I,
Stretched out before the open window, watch
Its screen-diced luminescence occupy
The surfaces of mess. Though I can’t touch

A coil of fabric and lost hair appears
By trimmed nails, dry husks from of dead beetles, bottle
Caps flipped into a corner off our beers,
Where chance has gathered it with dust to mottle

And rise with the bright air from off the river.
I stretch out near the open window, watch
This light particulate with just a quiver
Of frank revulsion. Though I cannot touch

The old version seems labored, especially with the hard enjambment in line five. If we take the line in isolation, the stress does fall on “I,” but since it really belongs wholly to the next line, the stresses become muddled. One wants to put the stress on “stretched,” which Wilson recognizes and corrects. Because the prosody is doing its job in the new version, the reader does not have to puzzle over where to put the stress, or where the caesura might go, but can visualize the speaker sitting by his window, thinking about our collective, messy life with greater clarity.

There is something ironic about a book entitled Some Permanent Things being released in a revised edition. But in their revisions, updated to reflect the author’s mature understanding of prosody, the poems have only been strengthened, becoming in that sense more permanent. If one has followed Wilson’s work for a period of time, one might notice certain incongruence between the strict standards of Wilson’s criticism, which at times had gone unrealized in his first collection (his second collection came out late last year). This is true of most poet-critics, but Wilson has integrity enough to bring these poems—many of which are at least twenty years old— to the criteria of his maturity.

These poems, these made things, have gone from timber to stone.

ii Wilson, James Matthew, The Fortunes of Poetry in an Age of Unmaking (Wiseblood Books, 2015), 18.

Advent and the Four Last Things

Editor’s note: The following homily was preached by the Reverend Peter M. J. Stravinskas, Ph.D., S.T.D., First Sunday of Advent (December 1, 2019), at the Church of the Holy Innocents, Manhattan. Today we begin a […]

Does liberalism deserve to be saved?

Patrick Deneen asserts that the natural endpoint of liberalism is desire rampant and tyrannical, while Jonah Goldberg argues that these outcomes are not liberalism, but […]