Dr. Gerard Verschuuren is an expert in the fields of biology, human genetics, and the philosophy of science. He was born in 1946 in the Netherlands, and has studied and worked at universities in Europe and the United States, teaching various courses in biology and philosophy.

He is a prolific writer, both in his native Dutch as well as English. His most recent book is Forty Anti-Catholic Lies: A Mythbusting Apologist Sets the Record Straight (Sophia Institute Press, 2018). 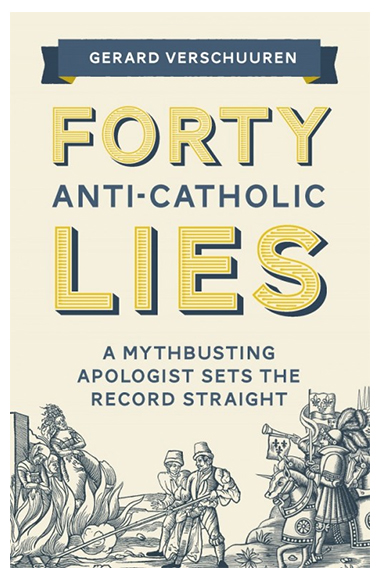 One of the most common threads of anti-Catholicism insists that the Church is anti-science—that the Church has impeded the progress of science for 2,000 years, and that science and faith simply cannot cooperate. Verschuuren has put immense effort into combating this misconception. Forty Anti-Catholic Lies is an opportunity for him to expand this work further and correct more misconceptions about the Church.

Gerard Verschuuren: In discussions with friends, often cradle Catholics but no longer actively involved with the Church, I discovered time and again how much misinformation there is about what Catholics are “supposed” to believe. That experience also gave me a keener eye for what I saw on television, read in newspapers and magazines, and surfed on the internet. I wrote the most prevalent misconceptions down and then gradually decided that they should be addressed in a book that both Catholics and non-Catholics could benefit from. The publisher, Sophia Institute Press, immediately saw its potential when they received the manuscript, and signed on to it.

CWR: What do you mean when you write of “anti-Catholic lies”?

Verschuuren: The editor of the book wasn’t sure if the word “lie” was appropriate, because it suggests some bad spirited intent. We discussed several alternatives before publication, but came back each time to the same word, “lie.”

Most people who harbor the misconceptions mentioned in the book are certainly not lying on purpose—they are just misinformed. Yet there are people who would love to misinform them because they have some kind of problem—call it “bias,” if you want—regarding the Catholic Church. This can be caused by upbringing, personal experiences (including the more recent sexual abuse), or many other factors. We also have to realize that during the Protestant Reformation a smear campaign was masterminded to legitimize the break with “Rome.” There are still “residues” of this campaign left in the minds of some anti-Catholics. And then there are the prejudices of media and academia that do not like the Catholic views that go against their own secular “values.”

All in all, the word “lies” is still a good choice, I think.

CWR: Why is it that there is so much misinformation about the Church out there? Is it deliberate, inadvertent, or a little of both?

Verschuuren: The shortest answer is: a little of both—as explained in the previous answer. I am not saying that the Church is flawless; there are too many serious sinners in her fold at all levels. But that’s not unique to the Church—we find similar scandals in politics, Hollywood, and the media world. On the other hand, even though there are many scandals regarding the Church, I like to stress that her message and doctrines are sacred, and should have prevented those scandals. But often what we desire prevails over what we know, or should know. No Church—and no book—can change that.

CWR: How did you go about choosing the forty “lies” to be covered in the book? What was that process like?

Verschuuren: I marked the “lies” down after conversations with friends and when more consciously combing through the mass media. I choose the most frequent ones and the ones I thought were the most detrimental to the image of the Catholic Church. But that’s necessarily a personal choice.

CWR: Why do you think it is important to unmask lies about the Catholic Church?

Verschuuren: Truth is truth, even if you do not accept it; and untruth is untruth, even if you claim it. Truth is truth—for everyone, anywhere, at any time. That’s one of the main reasons why we have to fight prejudices against the Catholic Church. But Albert Einstein said it right: “It is easier to split atoms than prejudices.” Yet, I would like to try. People deserve the truth, not just half-truths. At least this book gives them a better chance, I think, to find the truth. The problem is, though, that truth is not only a matter of receiving the right information, but also of being willing to listen to that information, and then perhaps accepting it. That’s the hopes and dreams I had when writing this book. Given its reception and the many copies sold, it has had some effect.

CWR: Are any of these “lies” something you believed in the past, and only later came to understand the truth?

Verschuuren: Yes, for a while I did believe that the Scriptures are the final truth for Christians, until I began to realize that this belief leads to many inconsistencies—one of them being an mounting diversification of biblical interpretations, leading to a devastating fragmentation of Christianity. In addition, I think there may have been some partial or even hidden lies in my own mind, which got only cured when I started to read more about the first Church Fathers, who stood at the cradle of Christianity. I found out during this process how “Catholic” they had been as the first Christians, and how “Catholic” we should be as modern-day Christians.

CWR: Are there any of these lies that you find particularly troubling or frustrating?

Verschuuren: Yes, all forty! But let me mention a few in particular. The idea that the Catholic Church is anti-science enormously bothers me, being a scientist myself. It is based on pure ignorance, and perhaps even malice. I wrote several other books on this issue, but hopefully expressed my opinion on this issue briefly and clearly enough in this book.

Also troubling are the misconceptions about the role of crusaders in the past, especially in confrontation with today’s Muslims, who have their own form of aggression, and also about the role of the inquisition, especially in the discussion with Protestants, who had their own persecutions and witch-hunts for centuries. And then there is the frustrating lie, mostly intentional, against the role of Pope Pius XII during the Nazi occupation. I explained in my book how maliciously he was vilified by Communists and their powerful sympathizers in the West.

CWR: What do you hope to accomplish with the book?

Verschuuren: If my book could help to turn the tide, what more could I wish for? Am I optimistic? Yes and No. Yes, for Jesus said to Peter, “You are Peter; and upon this rock I will build my church, and the gates of hell shall not prevail against it.” But that is for the long run. No is my answer for the short run.

We have to counteract the powerful voices of media and academia, which have acquired a strong bias against the Catholic Church and they us their huge megaphones. Many “liberals” and “progressives” do not oppose Catholics because they are Catholics—that could be seen as discrimination—but because Catholics are believed to have certain beliefs and values that are out-of-line with mainstream thinking. However, those alleged Catholic beliefs are often caricatures and misrepresentations of the real beliefs Catholics hold, as my book shows. But fortunately, I do see an uprise of authentic Catholic voices on the internet, on TV and radio, and in magazines. If my book could lend them support, so much needed, I would be more than happy.

Verschuuren: I hope this book can help both Catholics and non-Catholics. Catholics can learn from it what they themselves really believe, or should believe, and can even help them to be better prepared for discussions with those who attack their Faith. Non-Catholics may learn from it how to see Catholics with different eyes. What they need is religious correctness rather than political correctness—which might make a dialogue more fruitful.

About Paul Senz 114 Articles
Paul Senz has an undergraduate degree from the University of Portland in music and theology and earned a Master of Arts in Pastoral Ministry from the same university. He has contributed to Catholic World Report, Our Sunday Visitor Newsweekly, The Priest Magazine, National Catholic Register, Catholic Herald, and other outlets. Paul lives in Elk City, OK, with his wife and their four children.

In 12 Rules for Life, Jordan Peterson writes, I had outgrown the shallow Christianity of my youth by the time I could understand the fundamentals of Darwinian theory. After that, I could not distinguish the […]

Truth, justice, and the mystery of evil

God’s unity and simplicity mean that for Him truth, justice, and power are all the same. He isn’t conflicted, doesn’t do half-measures, and never loses. The evident reality of falsehood and injustice makes that hard […]

Doubling down on a bad deal

Perseverance on a difficult but noble path is a virtue. Stubbornness when confronted by irrefutable evidence of a grave mistake is a vice. The latter would seem an apt characterization of a letter sent on […]