In Curing Mad Truths, French philosopher Rémi Brague argues that the modern world is dying because it cannot answer the question of why it should live. To answer that question will require humility, according to Brague, because it is medieval truths about God, man, reason, and nature that are necessary for renewal. 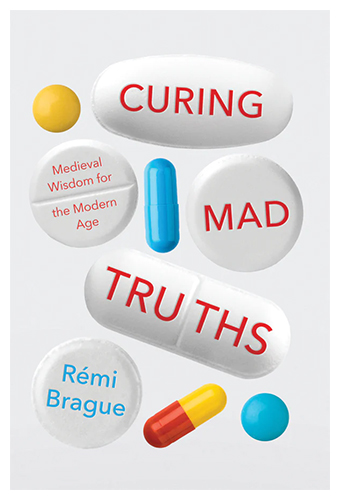 To put it mildly, such a dialogue between our rationalist age and an age commonly thought to be one of blind faith is difficult to launch. Brague opens with G.K. Chesterton’s infamous statement that the modern world is “full of the old Christian virtues gone mad.” Chesterton meant that the virtues “have gone mad because they have been isolated from each other.” Brague’s book focuses on the why and what of that madness. Such madness occurs from the modern conceit that reason contains the full content of truth, with no consideration of God. As Brague terms it, “The modern world plumes itself with its being utterly rational.”

But bare reason cannot ground its existence, its purposes, its truth. Brague notes the statement Chesterton made twenty years later about his original mad virtues observation:

[T]he modern world, with its modern movement, is living on Catholic capital. It is using, and using up, the truths that remain to it out of the old treasury of Christendom….For these are the two marks of modern moral ideals. First, that they were borrowed or snatched out of ancient or medieval hands. Second, that they wither very quickly in modern hands.

Brague disputes the English author’s use of the phrase “Christian virtues.” He concludes there are no Christian virtues, just as there is no Christian law, or Christian culture; rather there is the logos, the reasonable and loving and personal God that underwrites and guarantees these worthy human achievements. We can best understand Chesterton’s statement, Brague says, by observing how the modern world appropriates premodern ideas, and then corrupts them. Foremost is the corruption of reason and nature in his account.

Modernity, in Brague’s formulation, opts for a low-cost logos: there is no link between the reason in nature and God. However, it pays for this bargain of a dessicated reason without divine support in the form of pervasive human doubt about the basic goodness of man’s existence and the proper use of his faculties. The modern mind also warps providence into a general progress whereby things always improve regardless of our actions. And we are surprised by any lapse in that assumed movement. Finally, and this is quite evident today, Brague highlights that we constantly confess guilt and ask for mercy, particularly for the deeds of our ancestors, or for what happened 15 minutes ago and is now an affront to human rights. But this is done by secular sinners with the impossibility of forgiveness or absolution. Who would possess such authority in the modern dispensation?

Modernity’s logos is a project, Brague intones. Project, unlike a calling or vocation, is something that man conceives and gives to himself. Driving modernity’s idea of project is the supposed autonomy of mankind, his emancipation from the bonds of external powers, ruling oneself without regard to “cosmology or theology,” if not aiming for the inversion of God and man. Project’s partner is experimentation where “the very figure of Truth changes. Truth becomes the result of an experiment.” Descartes reveals its essence when he calls his Discourse on Method “the project of a universal science that could lift our nature up to its highest degree of perfection.” Sartre more directly expresses matters when he states that project is not just achieving something but a state of being, “I am my own project.” But when does the personal project start and end? Sartre couldn’t be his own project, Brague reasons, if we are the “result of a project, this project can’t be mine.” We could be someone else’s project, if not nature’s roll of the dice. Modernity’s supposed liberation from a theological and metaphysical past easily becomes its own source of imprisonment.

What if man isn’t just the projector but becomes the object of the experiment? Man could be judged a failure by nature, or by scientists who stand in judgment of other lesser mortals. Nietzsche, Brague argues, fully accepted this fact, and it is the basis of the Overman: “man is to the Overman who is to come what monkeys are to human beings.” Thus, Brague’s sober judgment that “The modern project brought about the possibility of its own demise.” It wanted autonomy of man, under no authority but science and experiments. However, “if man can determine itself, by itself and only by itself” then why should man continue to live? Reproducing children, in this conception, could be an act of abuse, hurling new humans into a despairing existence, according to David Benatar, a contemporary philosopher who realizes the full logic of mankind’s situation as project.

Modernity, Brague adds, produces many beautiful and comfortable things, but is unable to justify the being who enjoys those things. The result is paralysis, the condition that currently envelops us.

Brague produces a rich quote from Rousseau: atheism’s principles “don’t cause the death of people, but they prevent them from being born.” Rousseau didn’t live to see the totalitarian death cults of the twentieth century, or even the French Revolution, but he acutely understood that atheism is the most lethal long-term threat to civilization. Under atheism, man doubts his legitimacy because he knows that his reason doesn’t entitle him to rule the earth, or separate him from the other animals, or provide him with any notion of dignity. A consistent rationalist humanism ends in man no longer knowing his true worth. Brague applies this judgment to Europe, an aging continent that is increasingly bereft of children and a future. Its post-familial condition is the result of a foundational humanist decision to sever modern Europe from its classical and Christian patrimony. This project can’t justify a civilizational future.

Brague points to modernity’s near infatuation with individual liberty as another truth that is distorted by its divorce from a dialogue with truth. If freedom is a “proud self-image” of modernity or “the right of subjective freedom, is the hub and center of the difference between antiquity and modern times” then you end, Brague concludes, with autonomy fulfilled in “some sort of self-creation.” But we can’t create ourselves. To believe that we can is to indulge in a secular death wish that ignores basic facts of birth, community, continuity, and our immense debts to others. Freedom must confront birth, the fact that man’s creation is not self-chosen but given. Freedom must accept generation, but this is to sublimate man’s modernist desires to the Good.

Modernity reconsidering its principles—its low-cost logos—would create the opportunity to recover the Good as the condition of life, being, and freedom. Brague rehabilitates the Good not as a norm but as the “infrastructure of life.” We need to know the ground of our existence, or in the manner of Plato the “creative principle,” and in the biblical sense that creation itself is goodness and that being is fundamentally good. Plato compared the Good to the sun or that which nurtured life and helped bring it into being. Cut off from the sun, man’s survival is in jeopardy. Modernity shields man from the sun by its stipulation that we don’t know if we come from a good Principle or Being that nurtures our being. Can we even make sense of the ground and content of human freedom? But what if the ancient biblical teaching is right, creation is goodness because a “generous God calls us to partake of his own loving life.” Then, Brague concludes, we have “reasons to ensure the continuance of life.” We also know the meaning of our freedom.

In a fitting final chapter, Brague builds on man’s nature as a languaged being. Our discourse is fractured because language under the modern burden is willful, performative, and incapable of opening us to the truth. However, civil conversation that speaks to the reason-ability in other humans and in nature is the essence of the political animal and of protecting the continuance of life, Brague concludes. What is the difference, he asks, between civilization and barbarism? One answer is that the barbarians are the other, those outside of the city, or those we cannot understand. This was the position of the ancient Greeks regarding those who spoke languages that were indecipherable to them. Brague argues that we ourselves might be the barbarians.

Civilization is the condition of human beings flourishing together, living within cities where communication happens spontaneously. We don’t strive to understand one another, we have been formed to do this as members of concrete political and social orders. But barely underneath civilization lurks the condition of barbarism, which Brague finally defines as the refusal to communicate, and with that refusal the path opens to violence and death. Brague observes that barbarism is located within our western political societies in our refusal to be in touch with our past, our inheritance. We refuse to communicate with it. Who do we become once continuity with our history is ruptured? Barbarians. We cease to know the meaning of our civilization and why or how to conserve it.

In parting, Brague provides a wonderful understanding of conservatism as conversatism, or the conversational engagement with others that builds on our understanding of the goods we share in common. In short, we remain in conversation with others, with our friends and opponents, because our disagreements and agreements are held together by our more basic need to continue our civilization. We are sustained by a deeper truth that induces us to engage in public acts of conservatism also known as conversation.

About Richard M. Reinsch II 1 Article
Richard M. Reinsch II is the editor of Law & Liberty and the host of the podcast show LibertyLawTalk. He is coauthor with Peter Augustine Lawler of A Constitution in Full: Recovering the Unwritten Foundation of American Liberty (Kansas Press, May 2019). You can follow him @Reinsch84.

Longing for the Apocalypse, Now

Following the Russian invasion of Ukraine, it has been hard to resist the lust for justice. Putin’s brutal tactics, along with the pathos of his victims and the courage of Ukrainian resistance, all shared online […]

High-placed Shadows and the Summer of 2018

Does the Church still grow young as the world grows old? […]

Behind the famously captivating smile of the recently beatified Pope John Paul I, who led the Barque of Peter for just thirty-three days (August 26-September 28) in 1978, lived a wise, gentle soul who beautifully […]