Friar Pedro de Valderrama, the chaplain for the expedition of the Portuguese explorer Ferdinand Magellan, offered Mass on Sunday, Nov. 11, 1520 in Fortescue Bay on the shores of the Strait of Magellan.

This Holy Mass at the extreme southern tip of Chile became the first Eucharist celebrated in the South American country.

On Nov. 11, the faithful from different communities gathered at the Human Rights Plaza in downtown Punta Arenas, the capital of the Magallanes Region, for a period of prayer before the Blessed Sacrament to help launch this major celebration, which will close on Nov. 11, 2020.

Bishop Bernardo Bastres of Punta Arenas, led the prayers and a Eucharistic procession to the Punta Arenas cathedral.

When participants arrived at the cathedral, the bishop said they were giving “public witness to the Real Presence of Christ in the Blessed Sacrament of the Eucharist.”

“Processing down the main street of our city, we gather in our common home, which welcomes us with love, warmth and hope,” he said.

The second dimension, the bishop said, is that “if Christ gives himself to us as food for our lives, we must help everyone to have the necessary food to live in the dignity of a child of God.” 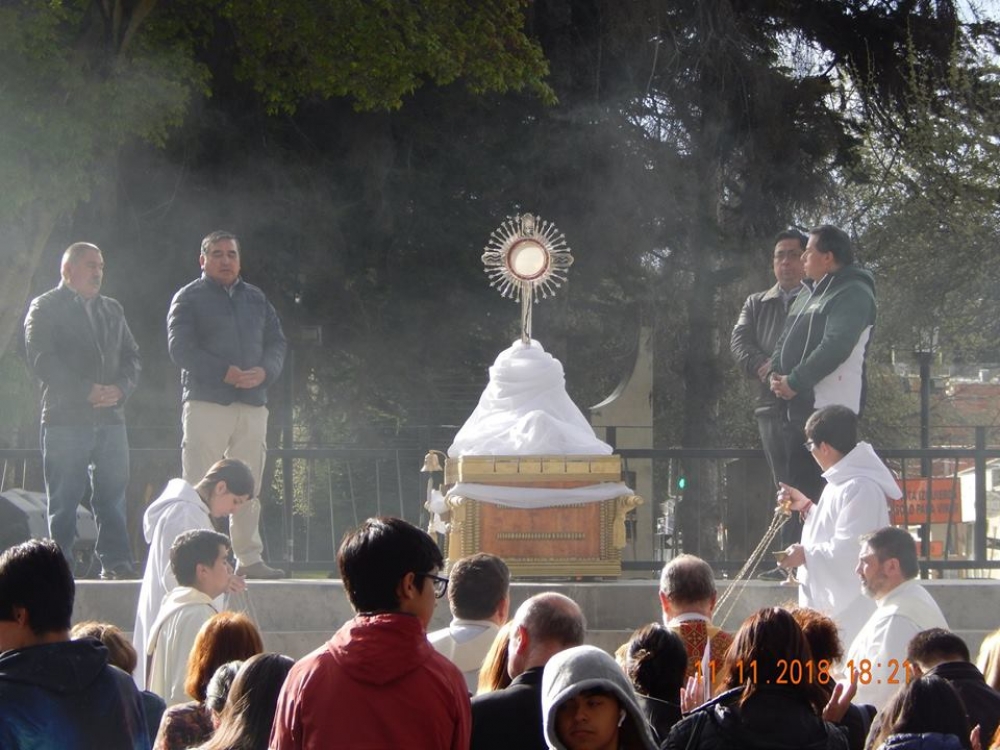 Firebomb is latest in series of attacks against iconic Chilean church

Santiago, Chile, Aug 24, 2017 / 11:04 am (CNA/EWTN News).- A religious congregation voiced sorrow and called for greater respect for faith after the iconic Church of National Gratitude in Santiago de Chile was hit with a firebomb attack by young people… […] Bogotá, Colombia, Sep 12, 2017 / 03:09 pm (CNA).- Consuelo del Socorro Córdoba is a Colombian woman who had made up her mind to be euthanized because of the serious illnesses caused by an acid attack she suffered in 2001.

But after meeting Pope Francis on Sept. 9 during his trip to the Colombia, she gave up her intention to end her life.

The woman, who suffers from toxoplasmosis – a very serious infection that affects the brain – has undergone 87 surgeries. Speaking to CNN en Español she told how she met Pope Francis at the Apostolic Nuntiature in Bogota.

“I was the first in line and the first one he greeted was me. He gave me a hug,” she said. “I’m happy, I told him I was going to get euthanized, to help me, and he told me no, that I was not going to do that. He told me I was very brave and very pretty.”

Since the attack this woman has undergone 87 operations, but there are still six more to go since she cannot consume solid food.

This encounter with Pope Francis, she said “completely changed” her. “Now I do want to live and I need the whole world to know.”

“Thanks be to God this miracle could take place, that I could be here,” the woman shared, who still needs several thousand dollars for her treatment.

“I decided to get euthanized Sept. 29. I have the letter here. Here in Teusaquillo, Dr. Gustavo Quiñones was going to give me the injection, but I’m not going to get it anymore,” she said.

Pope Francis’ Sept. 6-11 trip to Colombia follows apostolic visits by two of his predecessors, Bl. Paul VI and St. John Paul II. During his visit, he met with the country’s civil leaders, addressed Latin American bishops, spoke to men and women religious, and made a plea for an end to violence and human trafficking in the region.