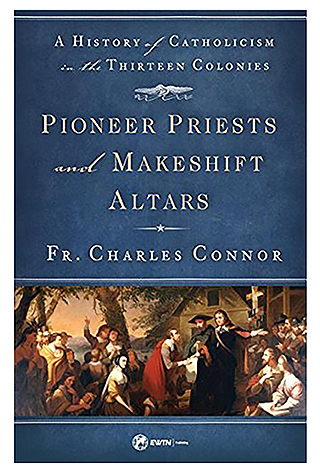 A new book by Fr. Charles Connor explores in vivid and engaging detail the history of the Church during the colonial period: Pioneer Priests and Makeshift Altars: A History of Catholicism in the Thirteen Colonies (EWTN Publishing, 2017). This is Fr. Connor’s seventh book, and he continues to demonstrate that he is one of the most gifted and knowledgeable experts on the history of the Catholic Church in the United States. He recently spoke with Catholic World Report about his new book, and how the experience of Catholics in the colonial period can help readers make better sense of various events and trends today.

Fr. Charles Connor: The idea was brought to me by a few different people at the publisher. This sort of topic would be not only attractive, but more important – it was a very needed topic. Even as Archbishop Lori indicated in his preface to the book, the period of Catholic history during the 13 British colonies, during the colonial period of our history, is something that has really not been known, and certainly not appreciated by our Catholic faithful. And it is very very significant if you think about, for example, the separatists – we always call them the “Pilgrims” – who went to Plymouth Plantation in 1620, it’s very significant because it was only 14 years later that the English Catholics arrived at St. Clement’s Island in southern Maryland. So we go deep, deeply back into the colonial period, and I think that does not seem to be sufficiently known among our Catholic people.

CWR: So the idea was brought to you, and did you enthusiastically take it on from the start?

Fr. Connor: Oh yes! Yes, this was always a period of great interest to me. Really, the history of the Catholic Church in the United States is of great interest at any period of time, of course, but most particularly in the colonial period. I had done a lot of research in southern Maryland, I’ve organized Catholic pilgrimages to Catholic southern Maryland, and I’ve written articles about it, and so forth. So it was much of interest to me, the colonial period, and for that matter the Revolutionary period. The book does, in its final chapters, also talk about the Revolutionary period, and it extends right up to the writing of the Federal Constitution and the implementation of that Constitution in 1789. … And actually, my own personal library was something I had built up on that particular subject for many years, so I had many sources that were readily accessible – but of course, I had to go to many more, naturally.

CWR: Two of your previous books – Defenders of the Faith in Word and Deed and Classic Catholic Converts – are essentially collections of biographical sketches. This book is a narrative, taking readers through the history of the Catholic Church during the colonial period. There are some famous figures who certainly stick out, such as Lord Baltimore and Charles Carroll. Are there particular figures from the Catholic Church in the colonial period that you would have liked to draw out more, and give more attention to? Or that you were able to give more attention to?

Fr. Connor: There is certainly a one such figure, and one who may not be particularly well known: Fr. Andrew White, who was one of the English Jesuits who accompanied the original expedition of the Ark and the Dove to southern Maryland. He wrote a very interesting narrative of the voyage from England to southern Maryland, through the winter months of 1634 until their arrival. They actually arrived in the Chesapeake and went up to St. Clement’s Island and offered the first Mass on the Feast of Our Lady’s Annunciation, on March 25, 1634. So, Fr. White is an interesting figure, as were a number of the Catholic gentry in southern Maryland who did so much to build up the political and social life, and who – for the brief periods of time that they enjoyed political power – did extend complete and absolute religious toleration to anyone and everyone. Because, of course, it was not simply Catholics who came over on the Ark and the Dove. There were many Protestants and indentured servants and that kind of thing, as well.

Also, much later – about 50 years later – in New York, you have the personality of Governor Thomas Dongan, who was governor of New York, and who did the very same thing that the Calvert family– the proprietors of Maryland – had done 50 years earlier. And that was the extension of religious toleration for the very few brief years that he was colonial governor. One of the strong, underlying points that we try to make in the book is about religious toleration, which was so clearly identifiable in those brief years when Catholics were in the political ascendency. And just as significant, when they fell from power, because of events that would take place in England and affect the American colonies; that very same religious toleration was denied to Catholic people in a bigoted, discriminatory way.

One of the cardinal points I try to make in this book: I really don’t think our Catholic people know sufficiently how much discrimination there was against us in the colonies. I try to really accentuate the terrible struggles and adversity of the early Catholics living through these decades of the colonial period, and up to and including the American Revolution.

CWR: How does the book inform what is happening in more recent United States history, up to and including today, as far as how Catholics are treated and the problems that Catholics face in public life?

Fr. Connor: Well, history is cyclical, you know. I think that we learn from the past, and I think that what goes around, comes around. I think that what goes on in any period of time is something that, in some fashion, has gone on before, though in different circumstances. And one of the most poignant observations that has been quoted many times by many people – but it’s a very truthful one, I think – was made by an American historian named Arthur Schlesinger, Sr. He said that anti-Catholicism is the most deep-seated bias in the American people. I’ve always found that interesting, and up to this very day I’ve never been convinced of any kind of incorrectness in that statement and I’ve always been much inclined to agree with it.

I think that anti-Catholicism today manifests itself in very different ways. You see it in court decisions all the time, in the pro-life movement. There are so many subtleties and even things that are not so subtle that are directed against the Catholic presence, Catholic moral principles, and that kind of thing. The discrimination against the Little Sisters of the Poor, for example. So it takes different forms, certainly, in the 21st century culture we’re living in. But it really is something that has been there in this culture since day one.

CWR: How would you sum up the book?

Fr. Connor: What I’ve tried to do is accentuate the contributions that so many Catholics made, some of whom might be very well known to readers, some of whom might be lesser known. Also the political, social, and cultural life that developed in Maryland — and the entirely different path that it took in Pennsylvania, and different in New York, and in New Jersey, and in New England, and the various parts of the country where one did find Catholics in the colonial period. So there were many, many contributions made by the Catholic body collectively, and individual Catholics who really stood out in their particular period of time. And these we try to accentuate, just for the general information of Catholic faithful today; and also, hopefully, we’ve inculcated a very strong appreciation among Catholics for what their forebears did in this country many years ago.

CWR: Do you think this might be the first in a series of the history of the Church in the United States?

Fr. Connor: It’s something that does interest me very much; I like the idea of keeping going and doing other periods. I don’t know whether it would be necessarily chronological, or the period that interests us the most – that’s to be determined in the future. But it is certainly a project I would like to continue, and to keep sharing the history of the Catholic Church in the United States. Who knows what the future will bring?

Catholicism and the American Founding

Natural Law, common law, Natural Rights, and localism—all so dear to the Founding—existed in 1776, simply put, because of the Catholic Church. […]

“Kids want a story they can sink their teeth into”: Raymond Arroyo on writing for young readers

Raymond Arroyo has worked for the Associated Press, the New York Observer, and as founding news director, managing editor, and lead anchor for EWTN News. He has interviewed cardinals, politicians, presidents, actors, authors, and more. […]

Archbishop William E. Lori of Baltimore has completed his preliminary report on the Diocese of Wheeling-Charleston and the conduct of the long-serving bishop there, Michael Bransfield. Archbishop Lori has submitted the report to the Congregation […]