For decades, it has been a cliché to say that there is a crisis is catechesis, especially with respect to young Catholics. In To Light a Fire on the Earth, Bishop Robert Barron, currently Auxiliary Bishop of the Archdiocese of Los Angles, describes what has to be the nadir:

When I was getting religious instruction as a young man, it was a period right after the council: 1969, ’70, ’71. We did a lot of very experiential kinds of things. I remember vividly one of the sisters at the grade school played James Taylor’s ‘You’ve Got a Friend,’ and told us, ‘Now as you hear this song, I want you to just draw what you’re feeling.’ I didn’t think it was anything weird, I just did what they told me, but that was religion class.

With charitable, even heroic, understatement, he adds: “The formation was a little superficial.” 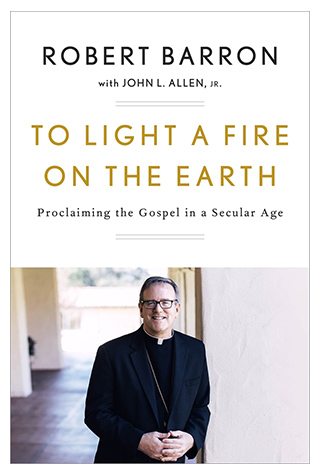 In his career as an evangelist, Barron has vanquished this sort of what he calls “banners and balloons” Catholicism. Few in our time are doing more than he is to eradicate this sloppiness and supplant it with the riches—theological, moral, and aesthetic, all so brilliantly deployed in his Catholicism series—that are available to bring both young and older Catholics into friendship with Christ. Journalist and author John Allen met with Barron for a series of conversations, and the result has been distilled into a highly readable portrait of this extraordinary prelate. Allen rightly eschews an emphasis on inside-baseball Catholic subjects and concentrates instead on Barron’s view of the Church in the world, with chapters on beauty, goodness, truth, the Bible, obstacles to faith, and the like. Allen provides essential background material for context and clarity; he then lets Bishop Barron speak for himself.

Barron’s evangelization is the product of a rigorous prayer life. Daily, this includes a Holy Hour before the Blessed Sacrament in the chapel in his residence and recitation of the Divine Office. As busy as any American CEO, Barron has absorbed the essential advice on prayer of Thomas Merton: “Take the time.” Moreover, he tells Allen about how decisive that solid example can be in this area. Many years ago, when Barron was studying is Paris, he arrived at a seminar taught by a prominent Jesuit theologian, Father Michel Corbin. When he showed up early, the Jesuit was saying the rosary. The impact on Barron of seeing this esteemed man at prayer was considerable: “I kind of surprised him, and I thought, Wow, here’s a French professor of theology praying the rosary. Corbin really helped me to see the liturgical and spiritual and prayerful dimension of what we were doing. I think that opened a door that I went through.”

There is a great deal of understandable (and, of course, warranted) discussion by Allen of Archbishop Fulton Sheen, but Barron realizes that, despite resemblances, the world and the media have changed in many basic ways since Sheen’s time. Barron’s success is predicated on grasping these changes and tailoring his evangelization to them. Barron understands that the religiously unaffiliated young are who he is after: “Getting after the nones should be a major priority – find them, bring them back, engage them, answer their questions. We’re losing young people in droves, and so we need to get them back. I think that should be a priority when it comes to evangelization.” As Allen notes, Barron recognizes the vital point made by then-Cardinal Joseph Ratzinger in 1985: The two best arguments for Christian belief are the saints and the art that “has grown in the [Church’s] womb.”

It comes as no surprise, then, that Barron is currently in the middle of producing a two-part series on great (but not all of whom are saints) figures in Church history. His follow-up series to Catholicism is the remarkable The Pivotal Players, which puts before us not only such obvious figures at St. Francis of Assisi and St. Augustine but also Michelangelo and Flannery O’Connor. And thus is Cardinal Ratzinger’s observation instantiated—and in a way that reaches Catholics right in the meeting rooms of their parishes.

In November of 2016, Barron was elected to lead the U.S. bishops’ Committee on Evangelization and Catechesis. (To see immediately why this selection was the obvious one, see his Erasmus Lecture, “Evangelizing the Nones,” in the January 2018 issue of First Things.) Barron is certainly not the only prelate with talent and success in this area—one thinks of Archbishop Charles Chaput of Philadelphia—but his selection demonstrates that the American bishops know the gravity of the problem the Church faces, and any kind of bureaucratic response is no response at all.

Yet another noteworthy challenge that Barron has embraced is his effort to extend his work in evangelization with the Word on Fire apostolate from a ministry into an ecclesiastical movement itself. This project is at a very inchoate stage, and Barron is working to formulate a framework (he mentions Opus Dei as an appealing example of what he has in mind). It is this evangelical ambition that is so striking in Barron: his drive, in so many ways, is Pauline in its intensity. Allen rightly sees him as “fundamentally a missionary.”

The key figure early on for Barron—the man who recognized his gifts and made room for them—was Francis Cardinal George, one of the most distinguished American bishops in recent memory. He shrewdly discouraged the young priest’s pursuit of what would undoubtedly have been a sterling academic career and told him: “I think you have a wider and bigger task to accomplish.” He certainly did—and does.

To Light a Fire on the Earth: Proclaiming the Gospel in a Secular Age
by Robert Barron with John L. Allen, Jr.
Image Books, 2017.
Hardcover, 260 pp.

Black Elk and the need for catechists

There is an army of volunteers across our country who give generously of their time to pass on the faith to our young people, but […]